When the X-Men costumes were much less gay.

GODZILLA VS. MONSTER ZERO is a perfect exemplar of why Godzilla movies are so bad. And – I know what you’re thinking – it’s NOT because of the guys in the rubber suits. It’s because even within the world of the movie – Nothing. Makes. Sense.

This movie – like so many other “Godzilla movies” of its era – is so badly written, with such poor understanding of motivation and plot, with such juvenile construction, that every aspect of the production is affected adversely, from the acting, to the hideous translations, to the Neanderthal misapprehension of space travel. The rubber suits then just add gravy to a film already execrable on so many other levels.

Aliens from “Planet X” capture two Earth astronauts and ask permission of them to “borrow” Godzilla and Rodan to rid their planet of Monster Zero. (Relax, Godz fans: “Monster Zero” is just what the aliens call Ghidorah. Yes, that same old golden dragon with the three waggly heads. The lame name change was done for the same reason producers changed Godzilla’s name to Gigantis in GODZILLA RAIDS AGAIN. They thought to bring in more viewers with a “new monster.” Times were different, audiences were different, venality was the same.) In return for lending Godzilla and Rodan, the aliens (who all speak Japanese badly dubbed with English thankfully) promise the cure for cancer.

So these two astronauts (one of them a literal golden-haired American boy named Nick Adams, who was only cast to bring in American viewers – again, that old black magic called venality – an even worse actor than his Japanese counterparts) return to Earth and report to authorities, who do nothing, because Godzilla is not theirs to schlub around! Doesn’t matter in the least, because the aliens have traveled to Earth on the heels of our astroknobs and take Godzilla and Rodan up in “electromagnetic bubbles.” (In other words, the aliens can control both monsters at whim by encasing them in inescapable bubbles. Hold that thought…) 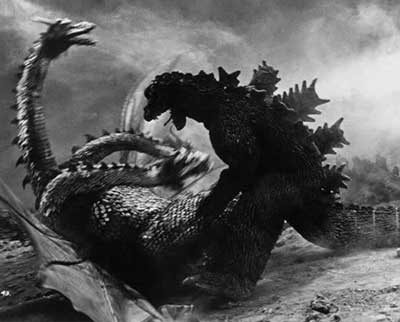 Is this where SON OF GODZILLA came from?

The Big G ‘n R proceed to throw rocks at Ghidorah on Planet X and perform all manner of doing nothing much, and succeed in driving him off! Hooray! If only veteran Godzilla scripter Shin’ichi Sekizawa understood the concept that if a civilization possessed interstellar travel it would also possesses NUCLEAR TECHNOLOGY that could do ONE BILLION TIMES the damage of rock-throwing and fire-breathing, then this scene wouldn’t be so fucking senseless! Why aren’t these interstellar aliens employing that technology on Ghidorah? Answer: Because though he writes space travel into his story, Sekizawa hasn’t got the faintest clue what space travel indicates about a society.

So the Earthlings are given a reel tape containing the cure for cancer. (They’re an alien interstellar species… it’s a good thing they still use REEL TAPES!)

When the two astrodoofs play the reel back on Earth, it’s not the expected cancer cure, it’s the alien commandant’s voice informing them Earth is being taken over by Planet X, and that Ghidorah, Godzilla and Rodan are under the aliens’ control, ready to destroy Earth’s  cities.

I just have one teeny tahny teensy little question for the meathead who wrote this Shakespearean epic: IF THE ALIENS COULD EXERT CONTROL OVER ALL THREE MONSTERS FROM THE VERY BEGINNING, WHY GO THROUGH THAT CHARADE OF ASKING FOR HELP AND TRANSPORTING GODZILLA AND RODAN TO PLANET X, TO HAVE THEM BATTLE GHIDORAH, AND THEN TRANSPORTING ALL THREE MONSTERS BACK TO EARTH? THEY ALWAYS HAD CONTROL OVER ALL THREE OF THEM. WHAT WAS THE POINT OF THE LAST HOUR AND 15 MINUTES OF THIS MOVIE? Consequently, what could possibly be the point in the last fifteen minutes?

Or how about the Jail Escape scene: our two heroes are behind bars in an alien spaceship (an interstellar alien race still uses BARS for imprisonment?). One of our heroes pulls out a noisemaker that disrupts the aliens. He turns it on: one alien falls to the floor holding his head in anguish, while the other… please move back while my head explodes again… while the other holds his head and runs toward the jail bars holding the key aloft – ACTING! – allowing our heroes to neck-grab him and extract the key from his hand! Now I know the script says our heroes have to escape this cell. And this child-acting and baby-plotting is the most plausible way they can do that?

The tragedy – the utter tragedy – is that the man helming this dungcastle brought the one true GODZILLA to life in 1954. We can see intimations of director Ishiro Honda‘s past greatness in some of his ambitious shots, like a spaceship landing on an alien planet with Jupiter in the background. But all the creative shots in the world can’t save him from the hot mess of the wretchedly constructed story. Apparently, after his shining moment in ’54, director Honda would degenerate to Good Company Man, and produce whatever turd the Toho Company put in front of him without question. As proven by this dogvomit. We have to ask ourselves: was GODZILLA 1954 a fluke? Literally, every single other Godzilla movie that Honda worked on – and he worked on many – is a testament to atrocious filmmaking. And again I say – IT’S NOT THE GUYS IN SUITS. It’s the guys in the other suits – the business suits. The executives at Toho Company. And the poor guys in the rubber suits became the most identifiable factors when the other execrable aspects of these movies made them nigh unwatchable.

Though a 10,000 page treatise could be written on the flaws in this movie, I’ve had enough. Go do something productive, like throwing rocks through Toho Company’s windows…

imdb
Word Count: 1,000      No. 982
The series has jumped the shark so many times, we cannot see the sharks for the jumps any more. Amongst this whole shark-jumping movie, Godzilla does the Safety Dance – or is it the Shark Jumpty Dance?