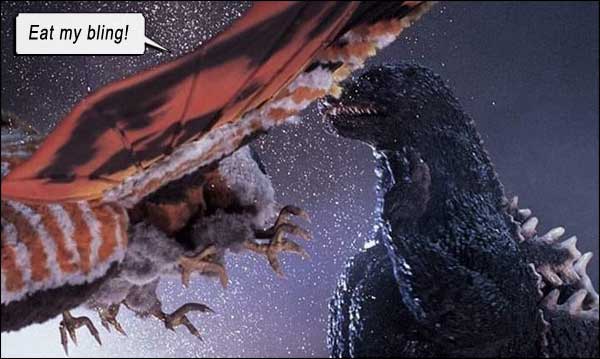 Mothra battles the evil moth Battra, while Godzilla gets in the way.

GODZILLA VS. MOTHRA might be construed as a rematch (after the 1964 movie of the same name), if only Godzilla knew why he was here and what he was doing, instead of wandering around like a senile old man at a retirement community. Seriously, it would have made more sense to name this movie MOTHRA VS. BATTRA. (The American edit of this movie was renamed GODZILLA AND MOTHRA: THE BATTLE FOR EARTH, because they wanted a title even less connected to the plot.)

After writing two reasonably bad GODZILLA entries (VS. BIOLLANTE and VS. KING GHIDORAH), Kazuki Ohmori writes his worst Godzilla film yet, and director Takao Okawara makes a hash of the first of his four Godzilla films.

Again, the prelude story, of a thief (Tetsuya Bessho as Tekuya), his ex-wife (Satomi Kobayashi as Masako) and a company man (Takehiro Murata as Andoh the comic relief) employed by the government to retrieve a gigantic egg unearthed by a meteor, is enjoyable fluff, but wholly unnecessary when the monsters arrive in screeching wet explosive rubber glory.

The egg is transported on the deck of a ship (no scenes of the equipment used to transport the 30-foot diameter egg from the top of a mountain to the deck of the ship – that would have been mind-blowing!) back to Japan. Cosmos 1 and Cosmos 2, two annoying tiny fairies who ward the egg, inform Tekuya, Masako and Andoh that it contains Mothra, and that her evil counterpart Battra might also have been unearthed by that same meteor. 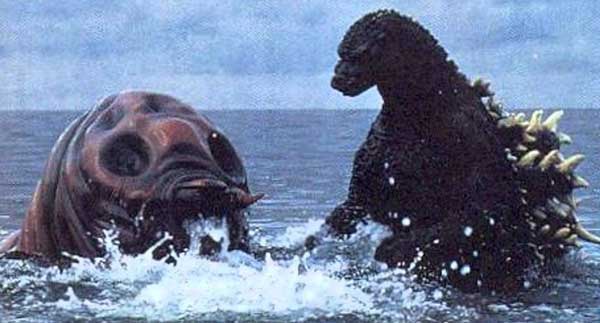 Sensuous bathing – the first sign your Just Friend has crossed a line.

Ship sails off, humans avoiding the melee, while Mothra escapes, skimming dolphin-style across the waves, as Godz and Batty sink, in an intriguing special effects scene of underwater battle, while opening up an undersea volcano.

There are environmental messages all over GODZILLA VS. MOTHRA, explicit, in-your-face political plugging of keeping the environment clean, don’t rape the land, the Earth is angry and punishing us for our arrogance, the entire human race is to blame… It was 1992 and the American Democratic Party was on the rise, Al Gore was the vice-president elect and the Environmental Justice Act of 1992 was introduced (but not passed), so there was all that synergy, and to find out whether the world was affected by America’s politics, we need just cast an ear over this movie’s incessant Earth-friendly roar. Still, come on guys, do you think your target demo of 7-year-olds is getting the message?

There is the Godzilla Detection Network, where a monitor buzzes to life: “GODZILLA DETECTED!” He just surfaced in an arbitrary part of the ocean – exactly how many sensors have you placed on the ocean’s surface to read him way out in the middle of nowhere? The ONLY good part about this scene is that Godzilla has brought – Akira Ifukube! Composer Ifukube’s majestic Godzilla Theme will not just be a standout musical cue amongst someone else’s tunes (as so many Godz films have done); Ifukube returns to the Godzilla franchise (last heard in 1975’s TERROR OF MECHAGODZILLA) to compose the full soundtrack!

A semblance of plot point when the humans disembark, and Takuya and Masako’s daughter (who misses daddy) runs to meet them, but Takuya has disappeared with the fairies, intending to sell them to an American bad actor for 1 million dollars. (And when I say “bad actor” that’s not a metaphor for him being a villain.) 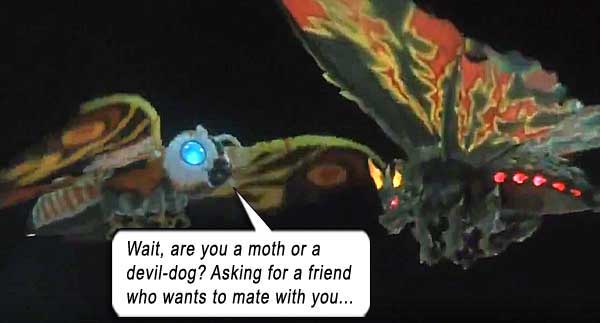 Masako finds Takuya with the aid of a psychic chick, Miki (Megumi Odaka), who just appears out of nowhere. If we didn’t know her from the past few Godz movies, there is no introduction here, no indication that she is an empath; just riding with Masako, telling her which way to turn, as she homes in on the fairies’ awful singing or pussy juice or something.

Meanwhile, Mothra has made landfall, crushing cutely through buildings as a caterpillar, homing in on the fairies herself, because her jizz is totally attracted to their pussy juices. Takuya, now reunited with his wife and daughter, all subplot of selling the fairies forgotten, lets his daughter raise the fairies to talk to Mothra, “We are here! Please behave.” Mothra nods—wait, that was just plain Japanese. You mean there’s no special code or sounds or language you speak, you just speak Japanese to Mothra? That means you can have whole conversations with her and explain the concept of not destroying people’s homes as she slides through the city. Apparently there must be some cultural misunderstanding – as Mothra turns back to the sea obediently, mowing down buildings in her path as usual. So… uh, what did you fairies mean by “behave” anyway? She wasn’t flattening those buildings through malice in the first place, so why did you imply she was misbehaving?

Mount Fuji erupts. Godzilla appears. For no reason, walking around breaking stuff. Most notably, an incredibly highly-detailed small-scale model of a full city by the bay that must have taken uncountable man-hours to build! Hats off to you model-builders! Reporter asks, “How did Godzilla get here?” B-actor answers: “It must have traveled under the Earth’s mantle and broken out of Mount Fuji. It’s beyond our comprehension.” Way back then, the Hollow Earth Vagina Theory in practice. 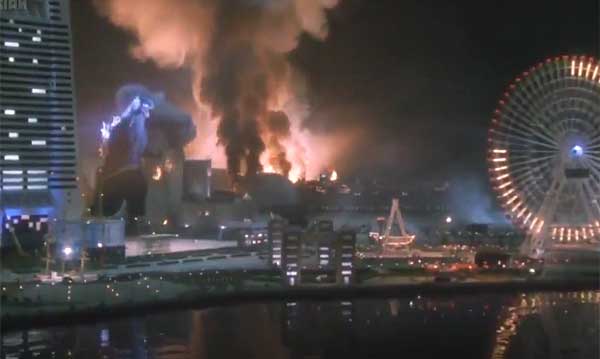 Godzilla stands before the City Built By Men – really meticulously.

Godzilla rampages. Fairies sing. Mothra emerges a full moth. Battra appears. (Interesting to note there is no one inside the rubber moth suits – they are full puppets on cables.) Battra shoots eye-lasers at Mothra like a Stormtrooper, meaning he’s hitting all the toy buildings and toy ships but hitting nowhere near Mothra, who is completely outmatched in firepower, so her “battle” consists of fleeing from Battra.

This production had a massive explosives budget – if it’s not being blown up by Batty, Godz is walking into it and it’s exploding for no reason.

Mothra apparently has these magic sparkles that she blings all over Battra, which puts him in the Friend Zone – why not LEAD with that power, woman?! Both the moths then fight Godzilla, simply because he’s here and, like an annoying drunk, wants to insert himself into the conversation. But Mothra then sparkles all over Godzilla, who goes down! Woman – what’d I say about leading with those sparkles?!

Godz and Batty go down into the ocean, presumably dead together, while the fairies inform the Japanese populace, “It was Battra’s job to stop a meteor that will destroy mankind at the end of the 20th century. Now Battra has given the job to Mothra.” Wait-whaaat?! Wasn’t Battra evil? Wasn’t Battra trying to flatten Tokyo an hour ago?