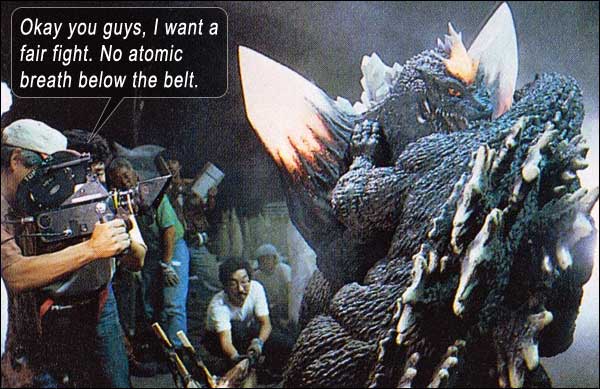 Godzilla must battle his own Godzilla clone – from space! But honestly, Godzilla is just an afterthought in yet another movie that uses his name as marquee power to sell tickets. Hell, even his clone seems like an afterthought as he has no objective other than to build a fortress of crystals and stand in it like an asshole from space.

GODZILLA VS. SPACE GODZILLA is the worst written Godzilla movie since his head looked like dog poo.

A monster looking like a meaner Godzilla arrives from space. (This rubber’s ferocious face would become the template for the Millennium Godzilla, launched in 1999.) Scientists discover it has the same genetic makeup as Godzilla (from Godz cells sent into space by BIOLLANTE and Mothra), “so we decided to call it Space Godzilla.” [snigger]

G-Force (the Godzilla Department of Karens) have split into two factions: Project T (which stands for Telepathy, a team trying to mind-control Godzilla), and Project M (which stands for M.O.G.U.E.R.A., an acronym in English that stands for Mobile Operation Godzilla Universal Expert Robot Aero-type, a giant manned robot constructed to kill Godzilla, which looks like a woman-hipped Transformer). Project M is run by the military (of course – to a hammer, everything else is a nail), while Project T is spearheaded by Miki (Megumi Odaka, who has top billing here; she started her Godzilla run as the psychic chick in BIOLLANTE and would appear in all the Heisei series, except the very first one, RETURN). Taking it for granted that telepathy is real, the psychic research scientist seeks her help to contact Godz: “None of my students are skilled enough yet, that’s why we want you to do it.” (So all of your students live in the real world?) 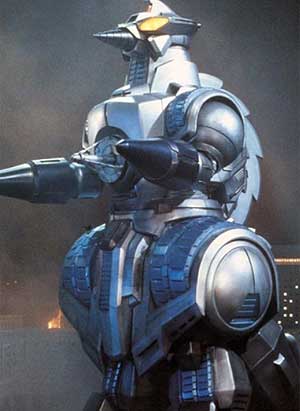 Two guys from Project T arrive on the island, Shinjo (Jun Hashizume, the Japanese Owen Wilson) and his young assistant Kiyo (Zenkichi Yoneyama). Miki arrives with the project leader Dr Gondo (Towako Yoshikawa) and the researcher Dr. Okubo (Yôsuke Saitô). They discover the fanatic Godzilla hater named Yuki (Akira Emoto), whose secret weapon is a bullet filled with blood coagulant. Also on the island, serving no purpose, is Little Godzilla (played by Little Frankie, a midget wrestler), who has gone back to the “Minilla” design, rather than the small T-rex that it resembled in the last movie (GODZILLA VS. MECHAGODZILLA II). It’s an upgraded design to the rubber, to try and cute up the movie by having him play tough, but uh, no.

The T-team succeeds in shooting a tiny “amplifier” onto Godzilla’s head when he surfaces from the ocean, which allows telepathic communication with Miki, who leads with, “I’ll make him walk…” Well, he’s doing that anyway, woman; just walking along the beach. Make him do the Macarena or something if you wanna keep that funding. How do they know when they’ve lost contact with him? Cos he’s still gonna be walking, whether you’re telling him to or not.

Space Godzilla lands on this remote island where Godzilla happens to be. What are the odds? While Godzilla is walking around of his own free will – or IS he? – Spacey telekinetically lifts Little-G with his mind and pile-drives him. Godzilla – at last – leads with his atomic breath against Spacey. Doesn’t make any difference, as Spacey explodes everything while Little-G huddles under the skirts of Big-G, until they both go down. Then Spacey flies away. Well, that was a waste of time.

Mothra and the twins appear (called Cosmos 1 and Cosmos 2), shedding little moths in space; just nice special effects, no bearing on the plot. The twins warn Miki that if Godzilla is killed, Earth can be conquered easily by Space Godzilla.

Project T leave the island when Space Godzilla leaves and Godzilla walks back into the ocean, Dr. Gondo lamenting, “Project T failed.” No kidding! Miki wants to stay on the island (reason unknown) and Shinjo Owen Wilson takes one look at that pearbottom and leaves the evac chopper to stay with her. But before he can get his cultivation on, Miki is kidnapped – by the traitor Dr. Okubo, who works for the Japanese mafia! They want Miki to mind-control Godz for destruction. (Uh, again, how do you know whether you’re “controlling” him when he’s pushing over buildings, or he’s just doing it for fun?) 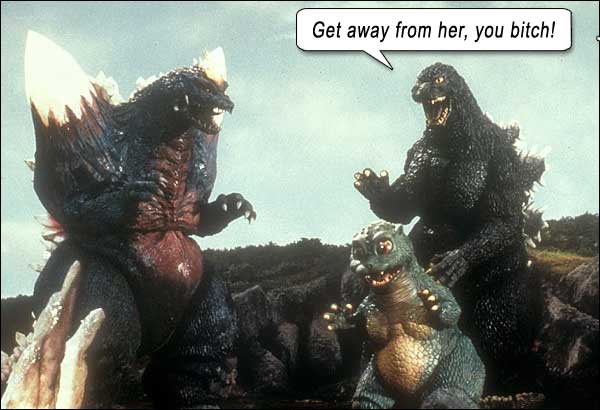 Meanwhile, Space Godzilla (Ryo Hariya in the suit) has flown to Fukuoka. Scenes of crowds running as Spacey floats above them in his gemstone space ship. Everything is crystals with this cat. He has two giant 80’s-fashion shoulder-pad crystals. He creates a fortress of giant stalagmite crystals and breaks the city with them.

Godzilla (played by Heisei veteran Kenpachirô Satsuma) makes landfall at Tokyo and starts tearing it up, as usual. So which is worse, the space monster or the terrestrial one? By the way, why is Godzilla heading toward battle with Space Godzilla? What is driving him? Is Spacey in Godzilla’s food territory or mating territory? Maybe Spacey just wants to chill in his fort and not bother anyone…

Meanwhile, Moguera is deployed – inside the rubber is Wataru Fukuda, while inside the robot are pilots Owen Wilson, Kiyo his boy wonder, and Yuki the Godz Hater.

And now we can go to sleep. Because this whole third act is a repetitive muddle; a flurry of Godzilla, Space Godzilla and Moguera lasering each other, roaring, being thrown down, or getting back up again. It’s funny when Godzilla actually wrestles with Space Godzilla because the rubbers look so much alike (hence the shoulder-crystals, to differentiate them).

Spacey levitates Godz into a building. Godz fires atomic breath, to no avail. Moguera does damage to Spacey, until Spacey knocks him over. Then it all starts over. There is a subplot of Yuki the Godz Hater forcibly taking over Moguera’s controls and trying to kill Godz, but that subplot is abandoned when everyone decides the prognostication of fairies is military policy (i.e. keep Godz alive to defeat Space-G). This is not slow and controlled filmmaking like GODZILLA VS. HEDORA; more like the three writers Kanji Kashiwa, Hiroshi Kashiwabara and Shinichirô Kobayashi never thought to give the villain any compelling objective, and couldn’t think of anything for the three feature kaiju to do. We get the distinct feeling that director Kenshô Yamashita (in his only Godz film), is either bored shitless or couldn’t care less. The third act is chock with laser efx (which are very good, by the way!) and oodles of smoke and Fluffy Movie Sparks to disguise the fact that nothing is happening.

Owen Wilson rescues Miki from the mafia (remember that subplot?). She is tied to a table and a henchman tips the table sideways as cover, to hide from Owen Wilson’s shooting. Miki levitates the table so that Owen Wilson can shoot the henchie’s legs under the gap. Just like that. She tells Owen Wilson: “It’s called telekinesis. I just never tried it before.” Well, isn’t that nice. Somebody kick me. 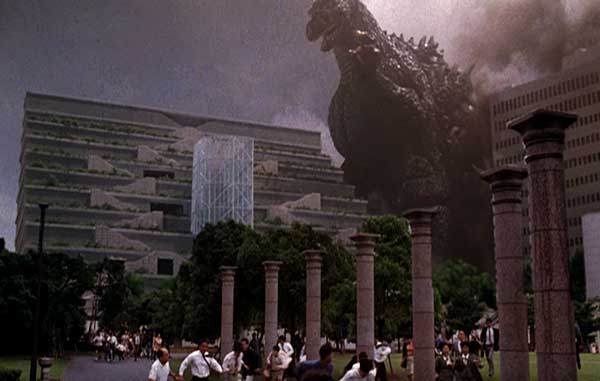 Like the ancient gods of war and famine, Godzilla loves to ruin children’s birthday parties.

Spacey has a force shield, plus the power of crystals, which he raises like rockets and rains down on Godzilla (quite an impressive sight!), plus atomic breath, plus the power to levitate himself or anything else. How can he lose? Well, suddenly he has NO force shield and Godzilla lasers him. Moguera is instrumental in Space-G’s death, by shooting off his shoulder crystals – and Godzilla just seems to move in and take all the credit, once again, almost a day-player in one of his own movies…

I’m not complaining about the movie being made for kids – hey, if you want monster fights with no other objective, that’s fine, but make it exciting at least.

Incoming message that makes zero sense: “If the universe keeps being polluted, well then another space monster will arrive soon. It was a warning to mankind!”

Meanwhile, Owen Wilson, whose sexual tension with Miki was making his pants levitate, walks along the beach with her, heeding the message: Find a girl who will levitate a table for you, and marry her.