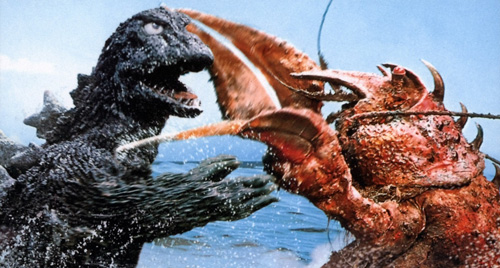 A Godzilla movie with an actual story! GODZILLA VS. THE SEA MONSTER boasts the same non-existent production values, the same process shots that trick the unsophisticated eyes of 1966 into thinking these monsters existed alongside humans, the same bad acting, the same rubber suits. Alleviating the pain somewhat is a convoluted plot that is not truly sensible, but at least has a beginning, middle and end, with a compelling ticking clock climax sequence and a surprising moment of sympathy for the unwitting savior of the day, Godzilla.

Three “teens” (well, I think they’re teens – they’ve just come from a dance-a-thon; don’t you have to be that young-dumb-and-fulla-cum to enter a dance-a-thon?) steal a sailing boat – that has already been stolen (!), the thief onboard posing as the owner. They discover he is a bank robber, so one of them commandeers the boat in search of his lost brother.

LUCKILY… the storm that shipwrecks them washes them up on the shore of the island where his brother is lost. What are the odds? The islanders worship a giant moth – hey, that’s Mothra! What are the odds?! And we thought he was dead at the end of GODZILLA VS. MOTHRA! And then the teens (led by thief Akira Takarada and accompanied by Kumi Mizuno, a native woman to alleviate the sausage-fest) stumble upon – Godzilla hibernating in a cave. What are the frickin’ odds? Okay: military, moth, meddlesome kids, lobster, Godzilla, nuclear bomb. This shit writes itself!

Written by daikaiju veteran Shin’ichi Sekizawa and directed by Godzilla newcomer Jun Fukuda (who would prove himself so incompetent he would be hired to direct four more Godzilla movies).

Japan in 1966 was obsessed with abuse of nuclear power, and well they may impugn nukes, as they didn’t want the stronger, soulless United States to abuse one in their direction – not after Hiroshima and Nagasaki. After the original 1954 GOJIRA (aka GODZILLA), a powerhouse damnation of nuclear energy gone awry, every subsequent Godzilla movie would in some way invoke nuclear power and its pitfalls.

GODZILLA VS. THE SEA MONSTER would be one of the series of films that reworked Godzilla into a “good guy,” not actively harming innocent humans, but rather fighting off giant monsters in aid of them (whether intentional or not). Godzilla destroying the nuclear base on this island and killing soldiers only furthered his heroism (again, played unintentionally).

Those soldiers shooting arbitrarily in the general direction of anything they were chasing or that was chasing them was priceless; no aim, no firing stance, not even holding their guns correctly, burping ammunition clearly into the backs of the soldiers in front of them. This is not “friendly fire” – this is hilarious fire. 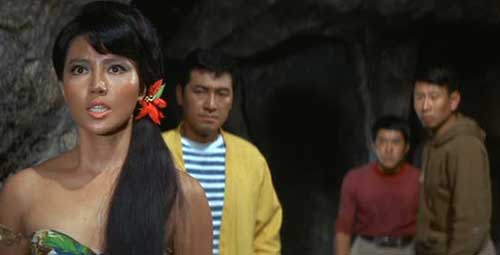 The cameraman pulls focus on the only person worth pulling focus on.

Funniest parts are the monster fights (and I seriously cannot figure whether they were meant to be funny or shocking; the distance of time and culture and good taste in movies separates me chasms from the intent of these filmmakers): Godzilla being attacked by an unidentified giant bird for the sake of padding; Godzilla throwing rocks at the lobster who bats them away with his claw like a baseball player; fighting waist-deep in the sea, Godzilla biting off the claw of the lobster! All while the most inappropriate music score blasts away creating incongruous tone throughout the movie.

Godzilla is only awakened near the end of the movie by the teens, so that his rampaging will distract the soldiers that are chasing them. Good plan, dimwits! The sleep still in his eyes, Big G immediately wades out to kill the crab monster. No reason, Just Because. His rampaging prompts the military to start the countdown on a nuclear bomb to destroy the island. After the teens attempt to defuse it, they give up and are flown off the island with the villagers by Mothra, leaving Godzilla forlornly looking after them from the ground.

If it is only implied throughout the story, now Godzilla’s beneficence is explicitly stated as the villagers and teens remark on how he saved their dumb asses (after sleeping through the first two Acts); feeling sorry for him, knowing a nuclear explosion is ticking down, they shout at him to flee the island. This he does, in a melodramatic/funny leap into the sea (a move duplicated in a couple of other Godzilla movies – by this I mean, the producers just run the same footage). He might have had only a small role in this film, and the story could surely have been written without him at all, but his presence and predicament is so compelling when he does appear that we forget/don’t care about the human-interest stories built around his antics.

Godzilla swims away from the island… and into our hearts.