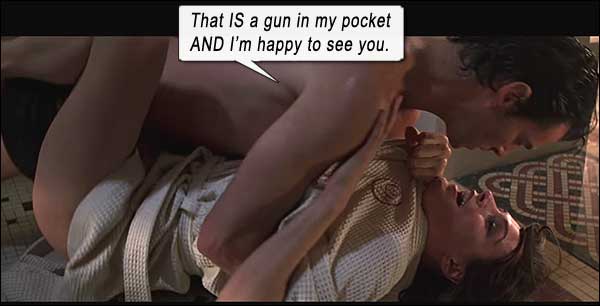 The codes of a destructive satellite named GOLDENEYE have been stolen by Russian traitors working with a British traitor, Agent 006, who plans to use Goldeneye’s electromagnetic pulses to cause a global financial meltdown. James Bond must defeat the stronger agent, thwart the runaway satellite, and bang the Russian hotness.

The first Bond that came to my young attention was Moore, Roger Moore. And I lavished the appropriate young-boy idolatry on this Real Man surrounded by gangsters, gadgets and girls. Upon learning of Connery, Sean Connery, it seemed only appropriate to then lavish the proprietary respect on He Who Came First – and let’s face it, he was quite the Man’s Man himself (meaning he was even more of a misogynist than Moore). Lazenby, George Lazenby, I never knew thee. And Dalton, Timothy Dalton, I was ambivalent at best about the choice, being young, dumb and fulla that white stuff.

I used to go around saying what a fine Bond that young REMINGTON STEELE fella would make; whatsisname? – Brosnan, Pierce Brosnan. Well, little did I know that wheels of fate were in motion: Brosnan was married to Cassandra Harris in 1981 when she did FOR YOUR EYES ONLY, and was introduced to producer Albert Broccoli… and thus he was, in fact, chosen to replace Roger Moore in 1987’s THE LIVING DAYLIGHTS – and lost the gig to Timothy Dalton due to NBC grasping like the tentacles on the S.P.E.C.T.R.E. octopus and extending Brosnan’s contract on REMINGTON STEELE due to the heat he would generate from being Bond. So Broccoli said Fuck NBC and hired Dalton instead…

Sadly, Cassandra would die of cancer in 1991 and would not see her husband become Bond.

But here we are at last, me being proven right on what a damn fine double-oh Brosnan cuts, in his first go-around as 007 at 42 years of age, in a film once again named so appropriately in the Bond vein, GOLDENEYE (maybe because we’ve been conditioned to accept the “gold” appellation, with GOLDFINGER (1964) and THE MAN WITH THE GOLDEN GUN (1974)).

GOLDENEYE is the first Bond film not lifted from an Ian Fleming Bond novel.  But there is a connection to Fleming: Goldeneye is the name of his estate in Oracabessa Bay in Jamaica. It was where he started the first draft to the very first Bond novel in 1952, Casino Royale. 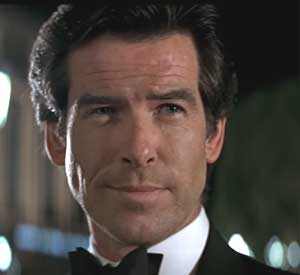 GOLDENEYE grips us immediately with James Bond 007 (Brosnan) bungee-jumping off a massive dam in total silence to infiltrate a Russian base. With fellow MI6 Agent 006 (Sean Bean), they both spy around a bit before 006 gets killed by Colonel Ourumov (Gottfried John) and 007 escapes in another throat-gripping stunt – leaping a motorbike off a cliff runway to chase a taxiing single-engine plane off the cliff, with no pilot. The stunt is so audacious, it cannot be matched by anything that comes after it. The opening titles slink in with Tina Turner singing Goldeneye.

Bond is careening down a mountain road in an Aston Martin with a young woman, who nervously begs him to slow down, “James, I enjoy a spirited ride as much as the next girl, but…”  A luscious woman in a red sportscar overtakes them, openly flirting with Bond. Bond’s young woman asks, “Who’s that?” James: “The next girl.” (Ha! I love it! Shutup! So do you! It’s 1995.)

After meeting that sportster at a baccarat table (the delectable Famke Janssen at the height of her sex as Xenia Onatopp – all the better to innuendo her), the plot kicks into gear, with Onatopp and Colonel Ourumov stealing a techno helicopter, wiping out a Russian satellite base, and tying Bond’s knickers into knots.

We are introduced to a new actor playing Moneypenny the MI6 secretary (Samantha Bond, who would play the character through Brosnan’s four Bond films); not as luscious as Caroline Bliss heating up Dalton, and not an auntie like Lois Maxwell pining for Connery’s and Moore’s underpants, Bond (Samantha) is an attractive redhead who smugly informs Bond (James) that she was just on a date with another gentleman, and that Bond’s flirtations could get him charged with sexual harassment! (Just wait’ll she gets a load of #MeToo!)

There’s a new M – Judi Dench as MI6 director, taking the reins from Robert Brown (who took over from Bernard Lee and only did four Bond films prior to Dench). The first female M, she’s openly contemptuous of Bond, “You’re a sexist, misogynist dinosaur,” as Bond is direct about his distaste for her as nothing more than “an accountant.” M matches Bond in smug, with a dash of anger – smug-anger? smanger? It sets up a contentious dynamic that would play right into the Daniel Craig era.

And there’s Q, the same old weapons expert we’ve grown to love – Desmond Llewelyn (a fixture since the 2nd Bond film, FROM RUSSIA WITH LOVE, and would be till his death after 1999’s THE WORLD IS NOT ENOUGH). His role is pure comic relief, and we realize this whole bit about showing Bond new gadgets has become almost a satire within each Bond film. 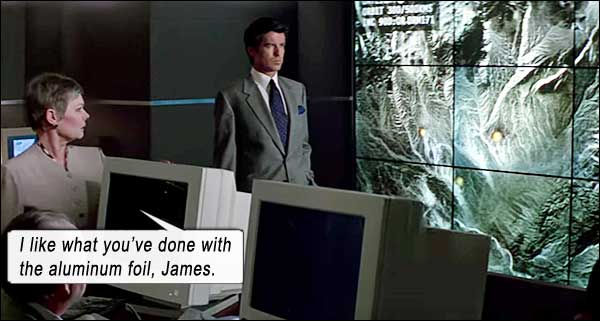 And the Bond Girl in this 17th EON Production Bond film – Izabella Scorupco as Natalya. She’s a computer programmer – because she’s a girl. Think I’m joking? Computers were coming into their own as plot drivers in movies, but note the attitude toward sitting and typing in 1995 – a task usually reserved for secretaries, a job usually reserved for women since time immemorial – all the Russian computer techs are women and doughy guys, and effete Alan Cumming is the head computer nerd. Real Men were still doing the punching and shooting. There is a moment where this disparity of effort comes across: Natalya must hack Goldeneye, and Bond gives her a look that says, “Wait – you’re actually going to sit there and TYPE while I do the real work of punching and shooting?!” It lasts for just a second – but it’s there, giving away the inborn misogyny of the filmmakers (writers Jeffery Caine and Bruce Feirstein and director Martin Campbell). There’s also another message in Bond’s look: that of a man unversed in computers (again – because they’re girly things).

To be fair, the women are given their due in fighting skills – Onatopp, it seems, takes an equal amount of sensual pleasure in violent killing as raunchy fucking, and her signature move is wrapping her thighs around a man and crushing the breath from him. And when Bond gives Natalya a gun, asking if she knows how to use it, she quickly demonstrates how proficient she is. So, Ladies – we got your back (as long as it’s pearbottom).

Joe Don Baker’s first Bond appearance was in THE LIVING DAYLIGHTS as an American ex-communicated general who supported the Confederates; here he plays agent Wade, a more regular Ugly American, loud and obnoxious, Bond’s disrespectful sidekick (“Hey, Jimbo!”), who turns up wherever he’s needed so that Bond isn’t stranded. And Robbie Coltrane is Russian mafia, more for comedy than plot.

GOLDENEYE loses steam when 006 turns up back from the dead, as a British traitor, and tries to kill Bond and Natalya. This first murder attempt, where they are left in a helicopter with missiles headed for them, yet with the EJECT button within reach… was beyond laughable for a supposedly canny traitorous double-oh agent to have set up. Was the movie pulling our legs? So by the 5th attempt on Bond’s and Natalya’s lives, we’ve checked out, figuring that 006 must harbor some love-that-cannot-be-spoken for 007 for all his half-hearted efforts in terminating him.

But it’s not all his fault – at one point, 006 sees Bond on a monitor and clearly says to his men, “Kill him.” Easy enough directive, right? Wrong. So the stormtrooper-trained baddies all machine-gun Bond’s general direction, hitting nothing but air, then when Bond steps out with his hands up, they point their guns at him as if that’s a threat. Idiots, you were just shooting at him enough to turn him into confetti, and now that he’s standing right in front of you, you STOP? They take Bond back to 006 – who proceeds to question Bond on why he won’t die. The first thing he should’ve shouted at his idiot soldiers: “Why did you morons bring him back here?! I SPECIFICALLY TOLD YOU TO KILL HIM!”

Movie devolves to TV’s THE A-TEAM when Bond chases Ourumov through Russian streets in a tank. Yes, I said TANK. It’s the coolest scene in the movie, with Bond driving a Russian T-55 tank blithely through buildings and landmarks (the amount of collateral damage! and probable death! But – good guy, so it’s okay) – yet every police car that impacts the tank and is turned over, crushed, or pushed off bridges, we see the occupants exit the cars in quick cutaways, for the PG-13 rubdown.

What about all those trained soldiers that run directly INTO the line of fire? Well, they fall down with no blood or brains spattering everywhere, as would be the case with the high caliber weapons they are being killed with.

Inexplicable interlude in the Caribbean, where Bond and Natalya seem to be spending a casual honeymoon. Skip– 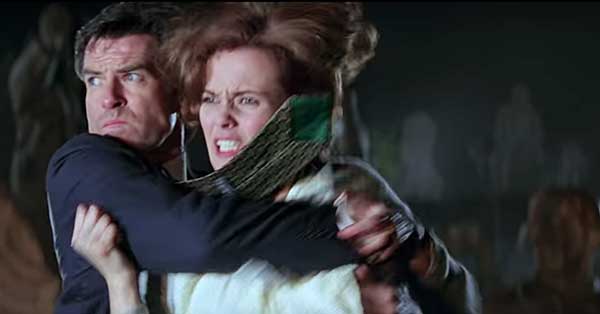 More could have been made of the competitiveness between 006 and 007. I imagined 006 was the veteran, having earned his license to kill earlier than Bond. The script plays them as old friends, with Bond BETWAYED. 006 sneers that he “was always better,” which means he has the inferiority complex. A climax above the dish of a radio antenna proves him wrong. However this outcome might have been more poignant had 007 always thought he was the inferior one and comes to realize, without fanfare, that in besting 006 he was, in fact, “always better” – the better agent, the better man, the better smug.

Timothy Dalton went back to the Ian Fleming 007 novels to inspire his take on Bond, but Pierce just looked to Roger Moore – and turned up the smug. Moore was 58 years old when his last Bond was released (A VIEW TO A KILL, 1985), and just didn’t have the smug-stamina (smugina? staminug?) to compete against a new generation of bad guys and badder girls. The franchise needed the younger Pierce to inject its smug into those bad people.

Except for the opening stunts, which are organic to the story, each outlandish action sequence is predicated on stupid things being done or neglected or coincidentally falling into place in the preceding action sequence, which means negating one small coincidence, or just having one of the 50,000 stray bullets hit its mark would put an end to this whole beargarden. The biggest recurring mistake is that no one will get smart and shoot Bond in the head point-blank, over the course of about 63 opportunities to do so. Seriously, you almost start rooting for the bad guys, the number of times this super secret agent finds himself in these embarrassing situations. If he was half the spy his legend makes him out to be, he wouldn’t wind up captured or in the crosshairs in the first place, and the story wouldn’t need the pathological procrastination and breathtaking bad aim.

The grandest, stupidest plot convenience of all must surely be Boris’s subconscious habit of clicking a pen three times while twirling it in his fingers, while he does his feminine computer hacking. Well, it’s a good thing Q just happened to give Bond an explosive pen that is armed when you click it three times. So, yeh… CONVENIENT. I mean, what are the odds?

About the same as someone shooting Bond in the head point-blank.

Gunbarrel Sequence: Up to this point, all the opening gunbarrel sequences have shown the rifling inside the gunbarrel as a static shot, but with GOLDENEYE (and all Brosnan’s films) the rifling would show reflections as the gunbarrel tracked its target! Compare the difference: Connery’s first go in the sights (THUNDERBALL) and Brosnan’s GOLDENEYE.