View to a Hammock.

Casey Affleck (Ben’s bro) stars in this controlled, sober, slightly disturbing thriller. From a novel by Dennis Lehane, Ben Affleck makes gravy in his directorial debut, about a redneck daughter’s kidnapping on the mean streets of Boston. And how his sleepwalking brother saves the day. 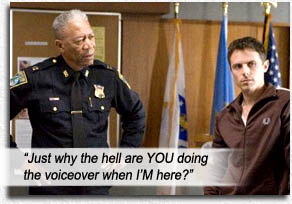 Surrounded by intrigue and Ed Harris as a detective and Morgan Freeman as the head cop (all doing that ker-ray-zee Boston accent), Casey slouches his way through the role of Patrick Kenzie, a small-time private dick, called in by the aunt of the kidnapped girl, who believes that neophytes Patrick, and his private dick-lover, Angie (Michelle Monaghan) would bring a more personalized approach to the investigation than the callous police.

They do – and get in way over their heads, their own personal life impacted by the moral decisions they must make.

Genetics is amazing: we can really see Ben in Casey; his career was kicked into high gear by the OCEAN’S ELEVEN franchise, where he honed his Hammock-on-a-Sunday-afternoon style. As soon as he shouts, we’re listening to Ben… to remain his own man, he should stay in that hammock. Not to say he’s so soporific he can’t rise to Action Man when called upon, as when surrounded by rednecks in a bar and mans up in front of his woman to get them out of there, to hit the hammock another day with all limbs intact.

After a gruesome scene involving another kidnapped child, the discovery of the redneck daughter is anti-climactic, for the kidnappers were not placing her in danger, but rather trying to save her from a life of trailer-trashiness, as exhibited by her single mother (played with lowlife brio by Amy Ryan), whose every move screams Easy After Two Vodkas.