Where the wave finally broke and rolled back…

I’m really in the way as a person. The myth has taken over.
— Hunter S. Thompson.

He was the rock star of writers. So it is fitting he graced the cover of Rolling Stone Magazine when he died. Hunter S. Thompson (1937-2005), the pill-popping, alcoholic, gun-toting, womanizing, self-proclaimed doctor of Gonzo Journalism. 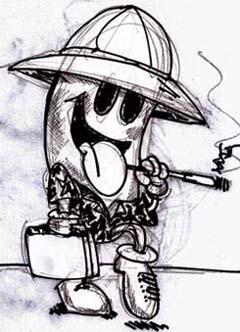 The Dr. of Gonzo Cukism 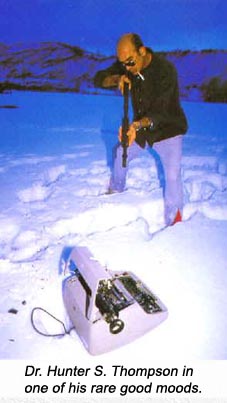 GONZO is co-produced, written and directed by Alex Gibney (from the words of Hunter S. Thompson). The documentary covers the life and times of Thompson, from his early days in the festering hippie-pit of Haight-Ashbury, San Francisco; riding with Hell’s Angels for his book of the same name; on the campaign trail with Richard Satan’s Vagina Nixon; his campaign for position of Sheriff of Aspen (one of his platforms to “change the name of Aspen to Fat City, so that all the sharks wouldn’t keep making money off the name Aspen”); his later days at home in Owl Farm, Woody Creek, Colorado, a playhouse for rock stars and villains; features audio recordings of Thompson in conversation with his lawyer Oscar Acosta, Johnny Depp reading from Thompson’s writings, and excerpts from the films WHERE THE BUFFALO ROAM (1980, with Bill Murray as Thompson) and FEAR AND LOATHING IN LAS VEGAS (1998, with Depp as Thompson).

GONZO seems chock full of grand content, but is one of those hybrid animals that will please some, displease others, and leave yet others completely confused as to what all the fuss is about. For newbies to the Thompson mythos (for those who climbed onboard after Depp’s witch doctor portrayal of Thompson in Terry Gilliam’s FEAR AND LOATHING), this documentary is an informative wealth of gonzo. For those who knew him merely through being the brunt of his vitriolic pen, I presume their reaction would be ambivalence; but for those true fans of Hunter’s cage-rattling journalism and jabberwocky élan, this doc is merely an adequate coverage of the myth of the man, rather than the man himself.

I HATE “dramatic recreations.” Depp reading/narrating Hunter’s own words is great; our third eye feels the wind in our ears as Hunter takes his motorbike for a demon ride out to The Edge along a midnight coast highway… But while Depp reads, we don’t want to see some asshole in blurry motorbike footage PRETENDING TO BE THOMPSON.

And when we hear audio of Thompson – again with the reenactment dramatizations! It cheapens this supposedly reverent film.

What Would Hunter Stockton Thompson Do?

He’d shoot the dramatic recreation assholes, that’s what he’d do!

There is footage of Hunter himself being interviewed or just playing patticake with the camera, philosophizing, writing, on TV shows, relaxing with whores and whiskey. It’s all good. But not enough.

Who better to reveal the mind of a mad emperor warrior than the mad emperor warrior himself? Even so, though his written words clacked into place with such vicious beauty, the man himself was never as illuminative as we would have liked him to be. An aura grows around all artists until perceptions become reality. Thompson knew this, hence his quote above about his myth taking over.

A child of the San Fran counter-culture of the late 60s, influenced by Ken Kesey and F. Scott Fitzgerald, he was there when the Hell’s Angels were young (Hell’s Angels: The Strange and Terrible Saga of the Outlaw Motorcycle Gangs, 1966); he was there at the zenith of the drug culture’s search for definition (Fear and Loathing in Las Vegas: A Savage Journey to the Heart of the American Dream, 1972; during this roman à clef, having to invent his alter ego Raoul Duke, in order to expound on his travails without legal repercussions); he was there when Satan’s Vagina Nixon was elected to his second term (Fear and Loathing: On the Campaign Trail ’72, 1973); he was there during the duplicitous Reagan reign (Generation of Swine: Tales of Shame and Degradation in the ’80s, 1988); he was there when Clinton rose to the throne (Better Than Sex: Confessions of a Political Junkie, 1994)… and after the attacks on the World Trade Center in September 2001, he correctly identified that the fear and loathing he spoke of almost satirically would become the engine that the low politicians would use to drive their dirty agendas.

In Fear and Loathing in Las Vegas, he writes what comes to be known as the Wave Speech. In its entirety, it brings a nostalgic tear…

The “wave” speech.
From Fear and Loathing in Las Vegas (end of Chapter 8): 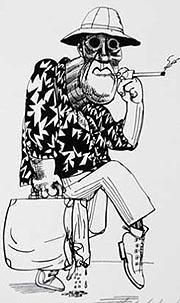 Strange memories on this nervous night in Las Vegas. Five years later? Six? It seems like a lifetime, or at least a Main Era – the kind of peak that never comes again. San Francisco in the middle sixties was a very special time and place to be a part of. Maybe it meant something. Maybe not, in the long run…but no explanation, no mix of words or music or memories can touch that sense of knowing that you were there and alive in that corner of time and the world. Whatever it meant…

…There was madness in any direction, at any hour. If not across the Bay, then up the Golden Gate or down 101 to Los Altos or La Honda… You could strike sparks anywhere. There was a fantastic universal sense that whatever we were doing was right, that we were winning…

And that, I think, was the handle – that sense of inevitable victory over the forces of Old and Evil. Not in any mean or military sense; we didn’t need that. Our energy would simply prevail. There was no point in fighting – on our side or theirs. We had all the momentum; we were riding the crest of a high and beautiful wave…

So now, less than five years later, you can go up on a steep hill in Las Vegas and look West, and with the right kind of eyes you can almost see the high-water mark – that place where the wave finally broke and rolled back.”

As a journalist in the obfuscating world of politics, Thompson was a lighthouse amongst a press corp of sputtering candles. He wasn’t just a “journalist” – he was a true Writer. Employed by Rolling Stone for only a year to cover the Nixon campaign, and on “special assignments” most other times, he didn’t need to create long-term relationships with the pimps and whores whom he covered with ferocious veracity, and thus had the freedom to actually “write” rather than just report. This was back when journalism was still being practiced as a revelatory art; with people like Woodward and Bernstein shining a light on the Nixon administration. But today, with the bleating ideologues and rampant ignorance and aversion to facts that infuses “journalism” or the reportage of “news,” it is rare to find anyone with such raw honesty. We are subjected to supposedly honest pundits hedging like schoolgirls when asked about idiots like Sarah Palin or demonstrable felons like Dick Cheney, never coming right out and saying, “She is not qualified to be president,” or “He should be indicted for war crimes.” The pundit/reporter who comes closest to Thompson’s unbridled power is Keith Olbermann, whose castigations of both Democratic and Republican administrations is poetic brimstone.

GONZO heavily covers George McGovern’s 1972 presidential bid, focusing on his running mate – the literally brain-fried Thomas Eagleton – as a huge part of his downfall to Nixon being sworn in for a second term. Thompson supported McGovern fanatically, as a matter of urgent common sense:

“McGovern made some stupid mistakes, but in context, they seem almost frivolous compared to the things Richard Nixon does every day of his life on purpose, as a matter of policy and a perfect expression of everything he stands for. Jesus! Where will it end? How low do you have to stoop in this country to be president?”

Is it any wonder Thompson looked around at the futility of good men and ended his life at his home in 2005? GONZO covers Thompson’s funeral, with his requested Gonzo monument – the two-thumbed fist statue – looming over the proceedings.

His writings were the high water mark of truthful reportage; with his death, the wave finally broke and rolled back.