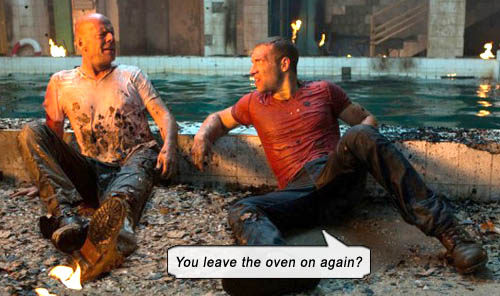 Double the McClane, Triple the Explosions, One Wisecrack Too Many.

A GOOD DAY TO DIE HARD starts with a drum solo– I mean, car chase. Car chases are, after all, the drum solos of movies.

To make it more interesting than other drum solos out there today, director John Moore (padawan to John Woo, judging by the amount of mayhem) makes it as outlandish and annoying as possible. To make matters worse, our hero John McClane – the curmudgeon cop who always finds himself in the wrong place at the wrong time and somehow saves the day with his intrusion – is now actually sticking his nose in where it is not needed.

It’s not a good day for DIE HARD.

The dynamic in DIE HARD movies has always been McClane (Bruce Willis) having to save the day when others cannot or will not. He is a Hero because he has the choice not to be. Here, he is a pain in the ass.

McClane travels to Russia to aid his estranged son Jack (Kai Courtney) during some kind of imprisonment. He runs into Jack in the midst of an escape attempt from bad guys, firstly delaying Jack so that his extraction by the CIA is aborted, then inserting himself sideways into the action by stealing a truck and tailing the car chase, destroying innumerable vehicles and sustaining millions in property damage, while endangering hundreds of lives.

McClane discovers Jack (who calls McClane ‘John’ purposefully, to accentuate their father-son rift) works for the CIA, so he knows his way around outlandish drum solos and professional Russian assassins who can’t aim. Still McClane dogs Jack’s heels: after crashing his truck, he steals a car from an innocent Russian citizen. McClane steps into the busy street to try to commandeer a car. When someone runs him over, he has the audacity to whine, “Are you fucking kidding me?” When the driver indignantly exits his car shouting Russian obscenities at McClane – rightfully so – McClane lays him out while wisecracking, “Do you think I understand a word you’re saying?” – then steals his car!

I’ve got to echo McClane’s words here, “Are you fucking kidding me?”

The filmmakers seem to be pushing the limits of our arena love for the McClane character: Do they think that on the strength of his previous outings we’ll give him a pass for being such a bluntskull in a country that is entirely out of his jurisdiction as a New York cop, for being such an Ugly American? His presence is deleterious to the CIA operation, and he’s only getting his son out of a situation that he himself caused.

In this bombastic actioner, where the dialogue is almost inaudible under the overbearing soundtrack, hardly five minutes go by before another Pretty Orange Explosion or a helicopter gunship shooting down a skyscraper, or McClane and Jack falling out of a building, shooting automatic weapons that never run out of ammunition, crashing through giant windows, running across rooftops, diving behind cover over broken glass, dodging explosive shrapnel or being buried under jagged concrete. To make it totally realistic, McClane gets a cut above his eye and Jack gets some blood on his shirt.

Between the explosions and the shouting, there’s a plot about nukes (involving Sebastian Koch and Yuliya Snigir), and an ongoing butting of heads between father McClane and son McClane. And that’s another script demerit: To make the father-son conflict work, screenwriter Skip Woods (who has some serious daddy issues) has to make McClane the Elder seem like an out of touch dunce. Now, when we first see Willis onscreen, he indeed looks “old,” but this is John McClane, New York cop and scourge of terrorists. He knows the biz! Why then is he constantly pooh-poohing Jack’s CIA status, and so combative about CIA protocols when he should be supporting his son’s breakneck mission? (He does in the end, but on his own cowboy terms.) Is McClane in fact like MY jealous father, who couldn’t make a living in the entertainment industry so decides to pooh-pooh all his son’s efforts and successes in it? Could the mighty John McClane be that ignorant and mouse-minded? Or is he just written that way by the ignorant and mouse-minded?

In one poignant moment, McClane apologizes to Jack for “fucking up his day,” then admits that he still had fun “running around” with him. In the McClane idiom, dodging assassins’ bullets has to count for father-son time. Then more Russians who can’t aim continue to shoot at them. Near the finale (consisting of big explosions and bigger explosions), Bruce Willis gets down to his characteristic Sweaty T-Shirt! And yup – it’s the same one he’s been wearing since DIE HARD (1986). NOW he’s John McClane!

DIE HARD aficionados will recall the first two movies in the series were R-rated, and did not hold back on colorful language. GOOD DAY is also R-rated, and wastes its rating on a hot chick who has one millisecond of screentime to unzip her leather outfit before they cut away (oh, such a “sizzling” trailer!), and on swearing which goes unnoticed due to the horn section trying to beat our brains in.