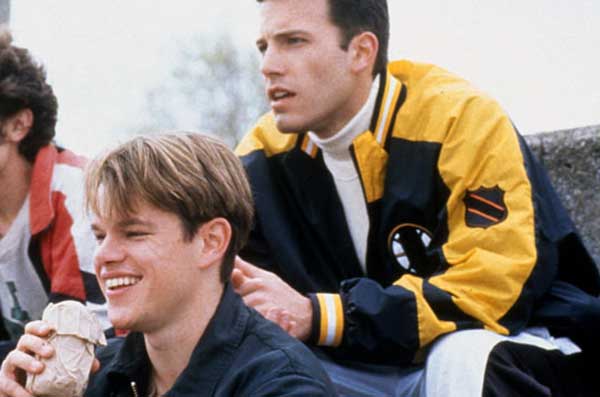 All hail the *intelligent* screenplay!

GOOD WILL HUNTING pairs “Bahston” boys Matt Damon and Ben Affleck in their first, and arguably most powerful, bromance to date (excepting maybe their turns as marauding angels in Kevin Smith’s DOGMA); written by Damon and Affleck, who deserve every inch of their little gold man (Best Screenplay 1998), a driving story of a disturbed young mathematical genius trying to find his niche in a world that unwittingly ostracizes him for his beautiful mind.

Matt Damon is Will Hunting, a brawling teen by day (with his informal gang Ben Affleck, Casey Affleck and Cole Hauser) and a janitor at a college by night; he is also an autodidactic savant with photographic retention skills and math aptitude to embarrass a rocket scientist. He is “discovered” by physicist Professor Lambeau (Stellan Skarsgård) who tries to nudge him on a respectable path by bailing him out of jail on the provision that Hunting will help the Professor solve perplexing mathematics problems and also see a therapist.

The math problems are a breeze for Hunting. The therapists are a stickier matter, as they all run screaming from his presence as he pinpoints their insecurities before they can pinpoint his – until he meets Sean Maguire (Robin Williams, unshaven like a bearcub), who brings all his DEAD POET’S philosophic skills to bear on the fast-talking, uncooperative scrapper. 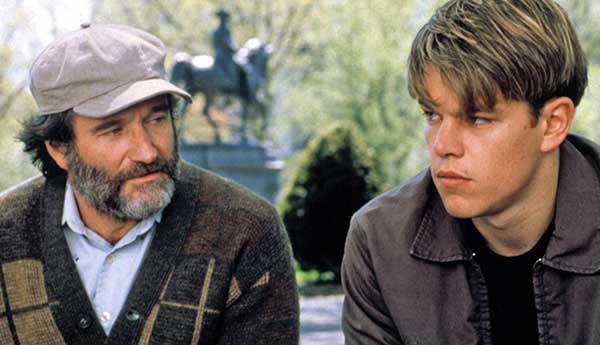 Minnie Driver is Skylar, the Harvard student who falls for Hunting, but whom he ends up pushing away neurotically, in an argument-out-of-nowhere scene that escalates out of nowhere, and is written so well, I’m sure they lifted the argument from a hidden camera in my bedroom.

When Hunting’s neurosis is unlocked by Maguire at the end, the revelation is so simple that we marvel at how easy it is to actually connect with someone, and yet how hard it is to find that connection.

The script benefits from being written by two “unknowns” who load it with verve and vitality, realism and dynamism, while still displaying a sound mechanical knowledge of “Hollywood” screenplay construction. Director and pal Kevin Smith aided Affleck and Damon in securing a deal where they had a large amount of control over their story, and director Gus Van Sant would let it play out unobtrusively and intelligently.

The Professor and Maguire are at odds on how to handle Hunting – push him into society or let him find it at his own pace; what could have become a clichéd pissing contest in a passé Hollywood writer’s hands remains a revelatory argument of ethics between two men who are battling their own regrets and just want the best for their surrogate son. If we thought we’d seen the best of Robin Williams in DEAD POET’S SOCIETY or AWAKENINGS (as opposed to his worst in NINE MONTHS or FATHER’S DAY), he embraces this sober psychiatrist’s role like the bearcub embracing his face; and it took a couple of novices to put words in his mouth that would melt like butter and ring like the bells of Notre Dame. (He would deservedly walk away with a little gold man of his own for Best Supporting Actor.)

The best aspect of the script is that it truly captures the contempt and separation that a virtuoso feels for people who cannot grasp the art or discipline that he finds so awkwardly simple. Hunting describes his aptitude for equations with an insightful analogy: “Beethoven looked at a piano and it just made sense to him; he could just play. I look at a piano, I see a bunch of keys, three pedals and a box of wood – but Beethoven, Mozart, they saw it, they could ‘just play.’ I couldn’t paint you a picture, I probably couldn’t hit the ball out of Fenway, and I can’t play the piano. But when it came to stuff like that [mathematics], I could always ‘just play’.”

Isn’t this the way of humanity, how each of us can perceive different things as complete “phrases”? Whereas I am mortified even changing a car tire, a friend of mine can see how the engine comes apart and is put back together, as a whole phrase, not just a series of unrelated parts. It’s all about seeing the thing as a whole, whether you’re building a skyscraper or dealing derivatives; a sculptor seeing the figure in the clay or a writer seeing the throughline in the screenplay. We concur, Matt Damon! We concur! 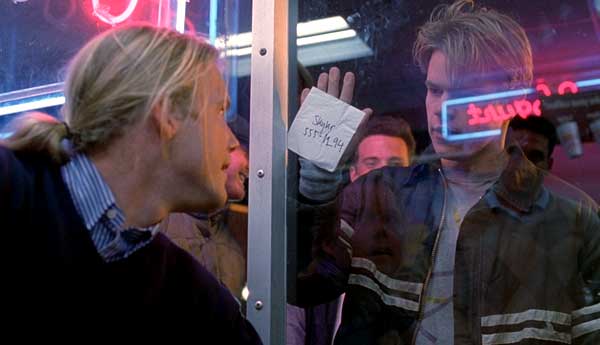 Hunting’s contempt and isolation is driven home when he screams at the Professor, “Do you know how easy this stuff is for me?” as the Professor tragically tries to explain the difference between himself and Hunting (i.e. one had to break his back to attain his knowledge and position, while one is simply there already intellectually – while maybe five people on Earth can tell the difference between them). Such a sad speech, Professor lamenting that he ever met Hunting, who is throwing it all away – and we see in Hunting’s eyes that the depth of the Professor’s sadness is not even registering, because he could always “just play,” and could not conceive of someone who couldn’t.

Hunting is offered jobs dealing with superstring theory, advanced algorithms, heavy duty CIA stuff, which he isn’t interested in, at one point raging into a tirade that connects all the political corruption in the world to the personal level, “…America is only over there to install a government who would sell them oil at a good price…”

Of course, the “troubled character” has to find his redemption and it is done subtly, with every payoff hitting elegantly: Hunting’s best friend Chuckie (Affleck) laments Hunting is still hauling bricks with him, and hopes for the day he can arrive to pick up Hunting for work and Hunting is not there, “…and you’re just gone, no goodbyes, no nothing”; Maguire tells Hunting of how he met his wife by giving up a classic baseball game, “I told my friends, ‘I’m going to see about a girl’.”

When these moments hit, the performances sell them; they are not forced and create magnificent screen moments for Williams, Affleck and Damon.

We wish Affleck and Damon could once again write something half as good as this masterpiece of cerebral mayhem. Though they’ve parlayed their grand win into continued success through the years, nothing they’ve done individually or together yet matches the raw (dare we call it “indie”) flavor-blast of GOOD WILL HUNTING. Like Costner, Welles and Lucas, they seem to have peaked at the head of their careers. It’s ironic that these two young guys (Affleck and Damon), now renowned for their sex symbol status, shot themselves into the A-List by writing and starring in a dialogue-driven mindfest!