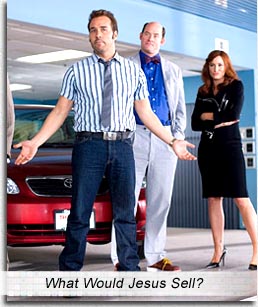 Slick, smarmy and sweaty-balled, THE GOODS is the bastard child of USED CARS and GLENGARRY GLEN ROSS.

Don “The Goods” Ready (Jeremy Piven) is a freelance super-salesman (his business card simply says, “Don Ready. I move cars, Motherfucker”) who is called in with his prevaricating posse to “sell the metal” when it is suntanning on the car lot.

Don Ready is such a smooth talker, he can rationalize why he should be allowed to smoke on a plane into a Quest for American Freedoms. Which he does – and gets to bra down stewardess Kristen Schaal in the process. (If only Jeremy Piven had these The Goods back in 1993, they’d never have thrown him off that roof in JUDGMENT DAY.)

Don is contracted in desperation by Selleck’s (James Brolin) Motors to move 200 cars over July 4 weekend to avoid losing the lot to a competitor (Alan Thicke, with hair still bigger than Daniel Boone’s coonskin cap).

So begins a vulgar, smack-talkin’, smooth-sellin’, car-ballin’ frenzy with big laughs on left-turn jokes motoring by with the speed and sex of a blonde in a red ‘Vette. The gags are so slick and numerous that the naff subplots of Ready falling in love and craving offspring were quite unnecessary. Oh well, that’s the American mainstream movie system selling itself to you like a car you don’t need.

Ving Rhames is black dynamite as a womanizer who has never “made lehve”; Ken Jeong is the Korean salesman specifically here for Pearl Harbor; Charles Napier is the crusty old salesman constantly referencing his days of thunder in “the REAL war”; THE DAILY SHOW alumni Rob Riggle and Ed Helms play a ten-year-old in a man’s body and a man who acts like a ten-year-old respectively – Rob loves drawing dinosaurs and Ed’s greatest love is his boy-band, nay, man-band; Jordano Spiro is the unnecessary love interest for Don Ready, supposedly intelligent and cynical over snatch-grabbers like Don Ready yet dumb enough to fall for Don Ready; Craig Robinson is a DJ who equates taking requests as taking shit from Whitey; and Kathryn Hahn, with her perverse predation of Rob’s boy-man, is as vulgar and funny as Madeline Kahn was to an earlier generation.