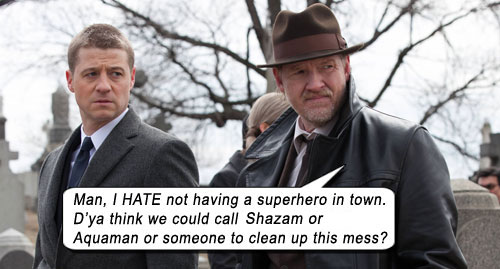 And that’s the Damoclean ambiguity hanging over the bat-eared head of this television series. We all “know” this city of sin; we all “know” who turns up to clean everyone’s clock; we all “know” this spunk-filled ‘burg is holding its breath for a dark savior – but we’re never going to meet him!

The question becomes: Can GOTHAM’s producers sustain interest in a series that will never attain its vigilante future? Well, SMALLVILLE managed (although Clark was always displaying his super powers, just not wearing spandex). Will GOTHAM give the young Bruce Wayne interesting “telegraphing” scenes, such as him standing atop Wayne Manor, not to – as the grownups think – jump in despair after his parents’ murders, but “to conquer fear”?

The Pilot episode opens with the murder of young Bruce Wayne’s billionaire parents, structured like a CSI investigation tracking the killer. Through this device we are introduced to all the players instilled in our bloodstreams. In this respect, one can accuse GOTHAM of a certain arrogance – the same arrogance displayed by makers of Jesus movies or Titanic movies: they “know” that we “know,” so they tease us with each well-known character telegraphing a trait that we know will only be fully realized when Gotham’s Avenger appears in a– NO! Batman is not coming! Get that out of your head!

At the eye of the storm is pre-teen David Mazouz as Bruce Wayne aka The Batman (–will you cut that out?!), a willful, somber and tragic figure, overseen by strict, feisty butler Alfred (Sean Pertwee, EQUILIBRIUM).

The detectives investigating The Wayne murders are grizzled veteran Harvey Bullock (Donal Logue, SONS OF ANARCHY) and green ex-soldier James Gordon (Ben McKenzie, SOUTHLAND), both pulling feature film performances in this gritty, realistic drama that is definitely using Christopher Nolan’s DARK KNIGHT trilogy as a template. McKenzie (who was actually Batman’s voice in the video BATMAN: YEAR ONE) looks like a young Russell Crowe, and plays it just as cool, grim and stoic. It is he who must bear the burden of starhood (in place of That Guy) and in this first episode, he does a grand job of shouldering that responsibility.

The detectives clash constantly with each other (conflict creates interest, as LETHAL WEAPON taught us), are led astray by false clues, and come across other characters we know too well: Edward Nygma (Cory Michael Smith), Oswald Cobblepot (Robin Taylor), Carmine Falcone (John Doman, THE WIRE) and Selina Kyle (Camren Bicondova). Jada Pinkett-Smith (HAWTHORNE) is crime underboss Fish Mooney, and bland blond Erin Richards is Gordon’s fiancé Barbara. All retweaked to jumble them into this storyline. A young girl opens a door, “What’s your name?” She answers, “Ivy.” As in Uma? We see her tending a plant later… 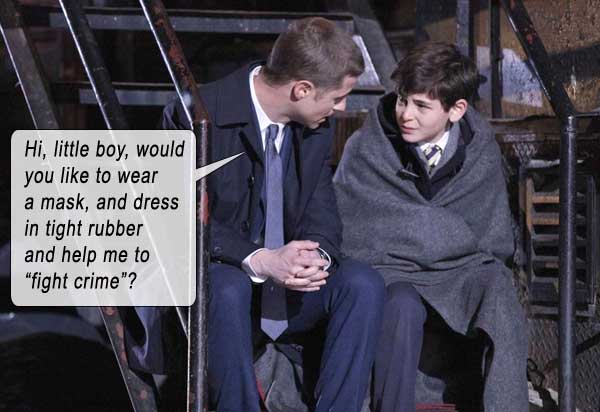 Gone are the days when good and bad were discerned by the color of a hat, and it is commendable that GOTHAM continually intertwines the fine threads between crims and cops; morally ambiguous allegiances makes no one truly clean, not even Gordon, even though he is painted as the only straight arrow. Of course, this ambiguity is built into GOTHAM’S Main Character That We Will Never See.

After Gordon is hung by his feet awaiting death from Fish’s henchmen, Bullock saves him by knowing the henchmen – until he is also hung by his feet. They are both saved by underworld boss Carmine Falcone. Falcone reveals he knew Bruce’s father well, “There was respect, friendship even.” Falcone may own the police department, but that doesn’t mean he wants chaos in the city that he “loves” – “You can’t have organized crime without law and order.” Then he demands that Gordon rub out Cobblepot for snitching on him, to prove he’s “with the program.”

The trailer presents us with the concept: “Before Penguin, Before Riddler, Before Catwoman, Before Batman – there was Gotham.” It’s a fine tease, asking us to try to imagine how seedy and corrupt a city must be to spawn such radicals. This then is the story of that city, and it has started with a batarang to the forehead.

We can hear Danny Elfman’s music throbbing at our temples: a dark knight is coming like wrath unleashed to untangle this mess– (Will you cut that out?! Go to lunch! Will you go to lunch?!)

Cop dramas are a proven commodity, and GOTHAM has actually retweaked a superhero tale into a cop drama. If it can retain its high-budget elan, moral ambiguity, and keep its well-known comicbook denizens from becoming cartoonish, I’d soothsay that this series will be reasonably successful, even without, uh, That Guy.