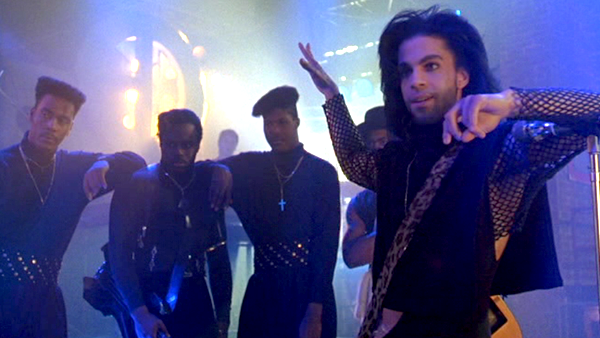 From what we can tell in this disjointed, surreal, badly-constructed sequel to PURPLE RAIN (1984), The Kid (Prince) is part-owner of a nightclub, for which his co-owner Morris (Morris Day) is trying to squeeze him out and acquire full ownership. Plunged romantically into the business/musical conflict between the two men is enigmatic young poet Aura (Ingrid Chavez), who might just be an angel…

Director Kevin Smith once said you would not be wrong in mistaking PURPLE RAIN as written and directed by Prince – because it just exuded his ethos, his style, his strut, his story… it is HIM all over. But it was merely serendipity that writer William Blinn and director/co-writer Albert Magnoli captured Prince’s essence in that dambuster. Though we can be sure Prince’s firestorm charisma and breathtaking talent fanned its flames. But he was not at the helm. Film was not his “language” at the time. Music was. Now, Prince directs GRAFFITI BRIDGE (after co-directing 1986’s UNDER THE CHERRY MOON), and it can be said that film is still not Prince’s primary language.

Prince develops GRAFFITI BRIDGE like an idea constantly slipping through his fingers. Scenes are staged so poorly, especially in the musical arena which is his forte, that we are hard pressed to acknowledge him as the genius we know him to be after witnessing such filmic confusion.

I don’t understand how a professional musician like Prince can think that we are buying these opening scenes of Morris Day’s band storming his club stage and performing a song to upstage him. It would take a novella-sized stinkpad to sum up everything wrong with this scene, from the act of replacing The Kid’s instruments into the PA with Morris’s instruments, to the mix, to the mics that no one is anywhere near, to the crowd’s implausible reactions, to the fact that Morris drives Prince’s crowd out to a party at his place – when it would behoove him to have the crowd stay and buy drinks at the venue! Is the man who wrote this guffwolla the same man who wrote the album Purple Rain?

And how do we even comprehend Morris accusing The Kid’s new “spiritual noise” of driving out customers, whilst The Kid’s customers are there jeering Morris about the accusation? Not that The Kid’s music is any different stylistically to any of the other artists’ music! On and on the stupidity grows, reaching new peaks when Aura is invited to Morris’ club and The Kid’s hangers-on go breathlessly running to him to tell him to come and look at the new girl Morris has on his arm; and that she should be on The Kid’s arm instead. Upon which The Kid goes and stands in the doorway of Morris’ club to watch Morris put the moves on Aura, until she is dragged out by Morris, right past The Kid, and they exchange a – meaningful glance? drunken cockeye? fateful spirit? – who knows? I mean, are these people in the 5th grade? Is the man who wrote this pigswill, the same man who penned the Controversy album?

The exact same PURPLE RAIN beats are followed (well, at least Prince learned something about story construction): no one likes his music, and he is in danger of losing his job unless he can create something people love; exactly as in PURPLE, people eventually like his music even though it remains stylistically exactly the same. But some angel was killed as a sacrifice to stop the war between two dance gangs and so… uh, everything’s gonna be alright!

The people are caricatures, the tropes are unsubtle, the poetic platitudes are mind-numbing, especially when we realize that with Prince at the helm, all these insufferable religious overtones are his doing. When he shares a poetic interlude with Aura, he claims she belongs to him. She denies it, saying she belongs to… and points up to the sky. That’s all fine and dandy, whore, if you can explain what you were doing drunk in the back of Morris’ caddy three scenes ago.

Prince always had a problem squaring his circle on religion and sex. Now *I* love Prince for his burgeoning sexuality, but where did he Gett Off inserting religion into the lust? This movie seems all the more juvenile for its confusing sexual mores and disparagement of women. Both Morris and The Kid have no understanding of how to be suave and cool around women, even though both pretend a sophistication that they never exhibit on film. Which is almost unbelievable, because we’re dealing with two ACTUAL SUAVE AND COOL guys who can wet panties on men and women with the arch of an eyebrow! 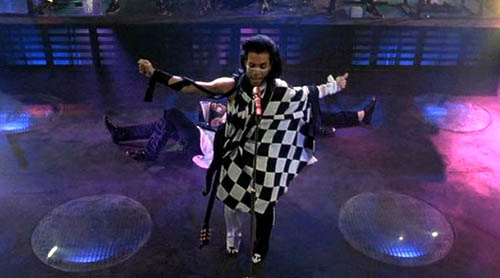 The Artist Formerly Known as Tablecloth.

But then, overarching any ignominious filmic indiscretion – there is Prince’s music. In that department, Prince is still king. All the movie’s songs are written by Prince and farmed out to be performed by himself, Morris Day, George Clinton, or Mavis Staples. We must consider that this “film” is merely a vehicle to deliver that unbounded aural ecstasy to the ears of the world. Pulsing with sensual heat, livid with tribal intensity, Prince’s music has graduated from the funk/rock of Purple Rain to a new level of thumpa-whumpa groove. Gone is his Purple Rain band, The Revolution, replaced by The New Power Generation, a more funky bunch, hydraulic piston beatdown, carving the Minneapolis sound and style of a generation.

We first meet the NPG performing their namesake tune New Power Generation, Prince’s voice almost lost amongst the heavy tribal wall of chorus. Standout track is the ominous Thieves In The Temple, which features the Thieves music video as part and parcel of the movie itself, its innovative dance sequences feeling not in the least out of place in this surreal fantasy. Which means that even if Prince doesn’t quite have a handle on helming feature films, his directorial prowess for music video art remains exceptional.