Back when overacting was the ONLY acting, before D.W. Griffiths, before KING KONG, almost before electricity (literally – this film was so far back in the mists of time that Thomas Edison was an indirect executive producer – yes, THAT Edison, the one who collects the money on your electric bills), THE GREAT TRAIN ROBBERY (1903) stands as a pioneering work of film art by director Edwin S. Porter. 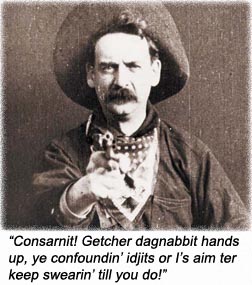 A quartet of bandits force a station master at gunpoint to flag down a train. (The shot of the train through the station window is a revelation of the ingenuity used to create these primitive special effects.) Boarding the train, the bandits rob the mail car (the mail man showing us that magnificent overacting first-hand), climb to the engine and force it to stop, then rob the passengers, shoot a guy (who overacts his dying scene to his heart’s content), and make off with the loot by driving the engine away from the carriages. The filmmaking, the topic and the execution are breathtaking! It’s Tarantino in diapers!

The sheriff is summoned from his Bacchanalian party involving women with dresses down to their ankles and lots of sensual square dancing. In a jump cut, we see the bandits being pursued on horseback by the sheriff’s posse. Gunfire lights up the screen as one of the bandits is shot dead off his horse. The three remaining bandits are ambushed and shot dead as they count their loot. A final shot shows a cowboy shooting directly at the camera.

Standing on the shoulders of the imaginative filmmaker Georges Méliès (A TRIP TO THE MOON, 1902), Porter illustrates the potential that movies could achieve, by traipsing so far outside the filmmaking box that TRAIN ROBBERY would become (according to Flashback: A Brief History of Film) the “single most famous American movie until it was displaced 12 years later by D.W. Griffiths’ THE BIRTH OF A NATION.”

Keep in mind this 10-minute movie is from an era when most “moving pictures” were 30 to 90 seconds long – because projectors couldn’t handle anything longer – with the film topics being mundane, everyday things like surf breaking on the sand, vaudeville acts, or a man kissing his wife. Now here comes Porter with a storyline, nay, a kinetic ACTION storyline, rife with murder, robbery, chase scenes, and even hot sex (if you count the dancing ladies with skirts down to their ankles – what sluts!); here comes a real steam engine, rather than a painted matte; here come process shots and hand-tinted color (exploding the lock-box is tinted red, the smoke from each gunshot is tinted orange), here come actors not just moving from stage left to stage right, but towards and away from the camera (the extended dance sequence is a precursor to SEVEN BRIDES FOR SEVEN BROTHERS, FLASHDANCE, SATURDAY NIGHT FEVER and any other dance movie you’d care to mention – with your grandmothers playing the sluts); here were scenes shot atop a moving train, when most directors were having heart attacks just grasping that their stationary cameras were somehow making these pictures “move” on the screen. (And the dummy that the bandit throws off the train still looks more real than the dummy that jumped off the dam for Harrison Ford in THE FUGITIVE.)

A silent movie with not one title card – it tells the story completely visually – buoyed only by its epic score (not the usual honkytonk piano or melodramatic blathering associated with silent films), sounding a little like an ancient precursor to Danny Elfman. Interestingly, there are no cutaways or closeups – not even any medium shots – all the scenes are master shots (long shots) with stationary cameras. It would take D.W. Griffiths to further enhance the art of film with those devices we now take for granted…

Not having discovered Method yet, all the dead or unconscious people invariably move when someone comes near them.

In a time when audiences were not yet used to seeing pictures on a screen move; in a time when people would flinch when anything came towards the camera (even though it was not 3D per se), can we modernaires truly comprehend the absolutely terrifying effect the final cowboy shooting at the screen would have evinced from a 1900’s crowd? Every time I see the opening of MAGNUM FORCE, with the magnum pointing at us and then firing, my chest still hitches a little. Magnify that a thousandfold – heart attacks in the aisles!

Justice is coming to Tombstone… via Edwin Porter.
The opening scenes of TOMBSTONE (1993) – those black and white scratched-film scenes over Robert Mitchum’s voiceover – feature many scenes from THE GREAT TRAIN ROBBERY, including the last shot of the cowboy shooting at the camera.

See the full ten-minute movie below.