The Most Tedious Story Ever Told.

Oh God! THE GREATEST STORY EVER TOLD is so far up its own arse that Satan called the filmmakers and thanked them for turning so many people off Christianity.

While choirs of angels provide the soundtrack, God speaks through Jesus Christ, his only begotten son whom he sent to Earth to take away the sins of the world. Having failed that task, it now falls to Max von Sydow to play Jesus, because The Power Of Christ Compels Him. 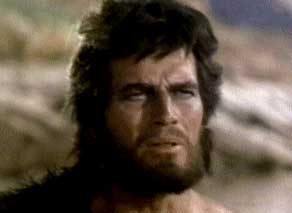 Jesus wanders about the Middle East – very, very slowly – sowing the seeds that would create unending religious war for two millennia, while platitudes spring forth from his cherubim lips; love thy neighbor, fisher of men, consider the lily – all of which sound suspiciously homosexual. Which is okay – if he would just come out of the closet. Instead, he gathers twelve -ahem- “disciples” who dog his footsteps and were probably the first alcoholics to vent the aphorism, “Have you heard the news? He is Risen,” without any irony.

GREATEST STORY is director George Stevens’s rejoinder to Nicholas Ray’s KING OF KINGS (1961). It was the age of the Jesus movie, so no one found anything remotely weird about this movie that didn’t have a cogent plot. For example, Jesus visits John the Baptist (Charlton Heston) in a river to be baptized. No evidence is given as to why John wants it the other way round, why Jesus is appearing now or what his purpose is. Crash cut to Jesus climbing a mountain, meeting an unidentified bum who promises Jesus all the kingdoms of the Earth if he would but bow down before him (oh, it’s General Zod!). There’s a cheat going on here though, because we all know the backstory (from being sensually whipped into hearing it at unholy Sunday Mass), so we are meant to be impressed that Jesus has turned down kingdoms that could have actually been provided. But in this movie there is no evidence on whether Zod can actually deliver what he promises, so Jesus might just be rebuffing an old bum. And where’s the fortitude in that? The writers are taking it for granted we’ve all been whipped by the same priests.

“Let him among you who is without sin cast the first stone!” You’ve read the story, you know this is the debut of Mary Magdalene, the whore. This Jesus line always gets me, because it speaks to the hypocrisy of humanity. And I love whores.

Movie continues meandering, lifting exact passages from -snigger- gospel, while those angels keep choiring. Someone says it’s easier for a camel to go through the eye of a needle than a smurf to enter the kingdom of heaven, and no one pipes up and sez, “Hey, are you gonna explain that, or are we gonna have to kill people for the next 2,000 years on how to interpret it?” I’m guessing the latter. 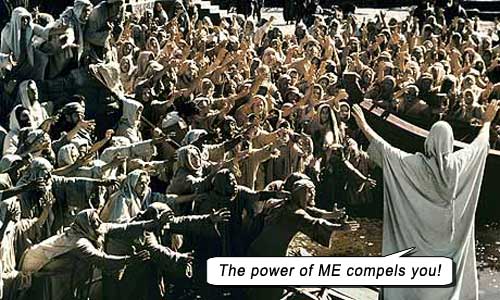 Monty Python Award for the funniest scene must go to the three cured guys who run through the crowds after Jesus heals them, yelling his praises while the Hallelujah Chorus yells the praises of Handel. They reach the high walls of the city, with Roman soldiers manning the ramparts above, and scream to the soldiers, “A man was dead but now he lives!” “I was crippled, and now I walk!” “I was blind, and now I see!” Hilarious not just because it reminds us of THE LIFE OF BRIAN (“Lord, I am affected by a bald patch!”) but because I’m wondering what the soldiers musta been thinking – “Why’re you telling US? We’re the lowest cogs in the empire, just gate guards. We don’t care. And we’ve got no stake in reporting this unverified gossip to anyone above us in rank, let alone spreading the news like it’s going to get us comfy chairs.”

When Jesus reanimates Lazarus (seemingly to impress a coupla chicks who won’t stop yammering at him), how come no one runs screaming that Lazarus is now a zombie? Isn’t it your own mythology that denotes a body reanimated after death is termed a “zombie”? Later, Jesus himself becomes a zombie when he “rises from the dead.” I mean, these are your own rules, right? Stop me if I’m wrong. And isn’t it your own mythology that states zombies eat humans? What then does this mean, “Take, eat; this is my body. Drink, this is my blood.”

The Roman authorities fear Jesus’s promotion of civil harmony, so use modern Roman diplomacy to undermine his message: crucifixion. It was the social media of its day. Like every Jesus movie, writers James Lee Barrett, George Stevens and God try to imply the Roman authorities were more worried about their political futures than the “holy” or “spiritual” ramifications of Jesus’s presence, but – like every Jesus movie – they heartily fail to convey this, each character ultimately falling under the delusion that if someone SAYS he’s The Messiah then he probably IS. 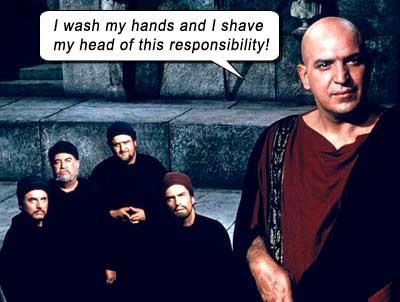 Performances are exceptional; cinematography is sweeping, we feel the sand in our sandals and the sun on our backs. This is truly an epic. And the messages – whether from a Messiah or a very naughty boy – are there for all to hear. And, as Python said, the messages were great then and always will be. But no one’s listening. Not the Jews, not the Catholics, and especially not the christians.

GREATEST STORY is loaded brim to barrel bottom with stars, every single B-role an A-List star or a That Guy. Heston opens a new cheese factory in Jerusalem with his Stentorian invocations to “Repent!” (when centurions dive on him waist deep in his river, they’re trying to capture him, and he’s busy dunking them all trying to baptize them,  yelling “Repent!”); Judas is a spy, so of course he’s THE MAN FROM U.N.C.L.E. (David McCallum); there’s Victor Buono (who wishes he was Frank Thring), Mark Lenard (Spock’s dad), Corporal Klinger from M.A.S.H (Jamie Farr); Kojak sentences Jesus (Telly Savalas as Pilate, who invented exercising on a floormat); The Duke repents at the foot of the cross (John Wayne as a centurion – of course, the ancient version of a military guy, “Surely this pilgrim was the Son of Gahd!”); Cornelius from PLANET OF THE APES (Roddy Mcdowall) is a disciple of Ape Law; Shelley Winters is cured by The Exorcist (although he couldn’t stop the Poseidon going over); Pat Boone (lovin’ his role as Angel at the Tomb!); Sidney Poitier helps Max von Sydow carry the cross (oh, I get it! Make the black man carry the white man’s burden!); a host of other familiar faces, Van Heflin, Jose Ferrer as Herod, Richard Conte, Angela Lansbury, Sal Mineo, Martin Landau – and there’s Professor from GILLIGAN’S ISLAND – This movie has everyone!

THE GREATEST STORY EVER TOLD succeeds as an epic movie about a famous personality. Where it fails is where every Jesus movie fails – it thinks it is relating the story of a man who succeeded. And everyone takes it for granted – filmmakers, audiences, characters within the story – that Jesus did succeed. I guess he did. Isn’t it great how there’s no more sin in the world because Jesus took it all upon himself  and “died for our sins”?