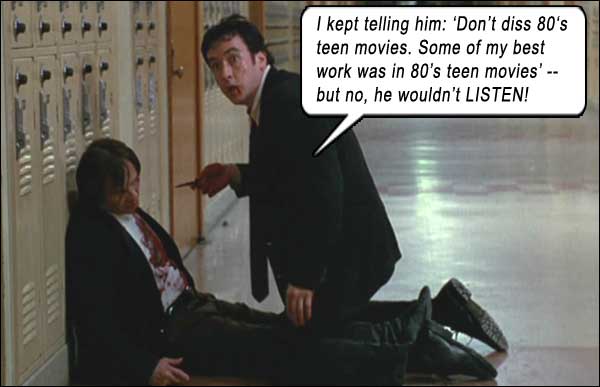 It’s the terror of knowing what this world is about
Watching some good friends screaming, “Let me out!”
— Queen/David Bowie, “Under Pressure.”

One could suppose GROSSE POINTE BLANK was a precursor/inspiration for THE SOPRANOS – and one could be whacked for it.

When we attend our high school reunions, we’d all like to be able to say, “I’m a professional killer.” And have the actual accumulated technical knowledge and combat experience to back it up. That’s why this black comedy is so damn cool.

John Cusack is unassuming, introspective, man-in-black Martin Blank – hitman. We meet him on a Job, where we learn his Zeroth Law: “It’s not me!” – his constant denial to marks who erroneously believe he has something personal against them; making it clear he is just Doing His Job. There’s the crux of GROSSE POINTE BLANK and the reason why even his “redemption” is not truly that, but merely a man grown tired of his profession and wanting to move on. 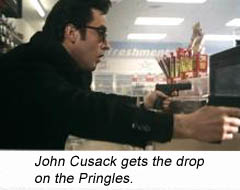 A beautiful irony of his renunciation of the killing business is that he delivers it while systematically gunning down all the assassins sent to kill him, while he finds himself protecting the mark that he was sent to kill.

Cusack’s overacting sister Joan is his secretary, who tells him of his ten-year high school reunion at Grosse Pointe, Detroit, which also happens to be the location of his next hit. Why not kill two birds…? Well, literally.

Minnie Driver is Blank’s high school flame, Debi. What are the odds that even if we’re professional killers, the chick whom we haven’t seen in ten years is still single, smokin’ and celibate when we get back to sweep her off her feet with our accumulated technical knowledge and combat experience?

That’s gonna happen. In Martin Blank’s world, it does! Why then is he so unhappy? Cue Alan Arkin, as Blank’s psychiatrist, eternally bemoaning his incorrigible patient, “Sigh… Don’t kill anybody for a few days. See what it feels like.”

At Grosse Pointe, Blank must balance his rekindled love interest with his whack job, while taking an old school chum into his confidence (Jeremy Piven), while the NSA tail him (Hank Azaria), and the Russian mob (Benny Urquidez), and a veteran assassin (Dan Aykroyd) bent on starting a union for assassins and either signing up Blank or whacking him for declining membership.

Anyone blame Blank for wanting out? While they keep pulling him back in.

In the pantheon of what we term “violent” movies, or even “movies about violence,” GROSSE POINTE BLANK is an anomaly. There are gun battles and violent fights, yes, but the violence is impersonal, almost clinical, and very clean, not gory; in some cases, comedic, whenever Cusack confronts Aykroyd.

Directed by George Armitage (who also directed a movie called HIT MAN in 1972), what separates this hitman movie from all those with the hard rock soundtracks and hero angles and carotids spraying walls is its Fantastic Voyage into the brain of the hitman. And not via a bullet either. Cusack co-wrote the screenplay, which explains quite feasibly how an Army-trained youth with a “certain moral flexibility” could be loaned out to the CIA and then find himself a “government spook.”

As Debi weeps, having to confront this reality and denying it with every fiber of her social inculcation, he explains “…the idea of governments and nations is all public relations theory at this point.” Beautiful! Encapsulating modern geopolitics in one sentence. 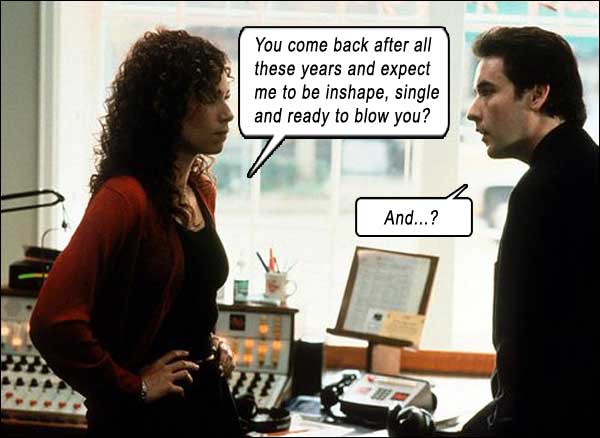 While Debi’s Small Town Mentality tries to constantly veer the conversation downward to a manageable dunderhead level (“I don’t wanna know about theories! Explain the dead people! Who do you kill?”), he continues to expound on amorality, ideology, nihilism, and how his world is bigger than her societal inculcation can digest. Which she proves by asking how he “never learned it was wrong. That there are certain things you don’t do in a civilized society.” He counters, “What civilizations are we talking about?”

Burn! From the ancient Aztecs to Rome to Amerika, humans have always been murderous barbarians. Or at least Republicans. Same thing. The Aztecs had their human sacrifice pyramids, Rome had its Circus Maximus, Amerika has Guantanamo Bay.

“You’re a psychopath!”
“No, a psychopath kills for no reason. I kill for money! Cops shoot demonstrators – that’s indiscriminate. I don’t do that!”

Whipcrack dialogue, dark hilarity, beautiful nihilism… GROSSE POINTE BLANK is the unique archetype by which all other hitman movies should be measured. Unless you wanna get whacked.