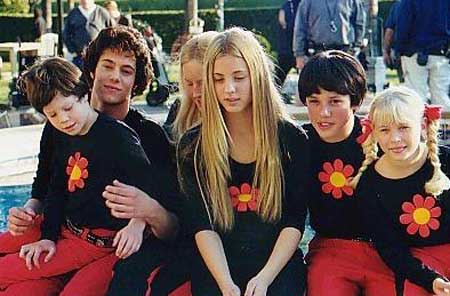 Listen… to what the flower people say…

When far out is not all the way.

So… did Greg ever do it with Marcia?…

In GROWING UP BRADY, the original Greg Brady (Barry Williams) answers that most-asked question of his career.

Made-for-TV movies are usually tiresome, badly-made, factually unhinged and annoying. And so is GROWING UP BRADY. But there’s something about it that draws us in, compelling us to keep watching, just like the original saccharine trainwreck THE BRADY BUNCH (1969-1974)…

FAILED! He let us down, boys! He was our final hope that that barely-legal, far out chick Marcia did not go to waste all those decades ago; he was our avatar, who might have vicariously brought us skin-close to that groovy thigh-high skirt and blonde waterfall tresses – and he blew it!

After all those school rumors of Greg “doing it” with not only Marcia, but Mrs. Brady as well (!), Williams is either exhibiting embarrassing candor in admitting defeat, or protecting the sensibilities of his beloved fellow stars.

From its opening scenes, showing real life Barry Williams taking a cab to a studio lot, Williams and director Richard A. Lolla, know what is on everyone’s mind (as shown by Williams being asked That Question many times by strangers just on his casual journey to the studio) – and they deliver, setting our tongues lolling pruriently at regular intervals. We men especially appreciate, Mr. Lolla, all those pubis shots of Marcia getting into a pool with Greg… 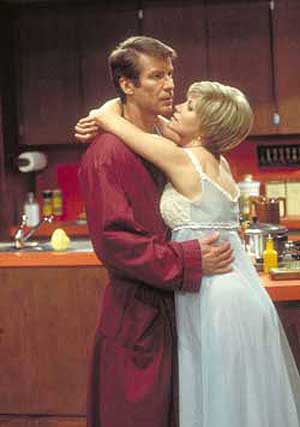 Amazingly, this 100-minute biopic finds time to also cover other aspects of the Brady phenomenon, such as Robert Reed’s (aka patriarch Mike Brady) dissatisfaction with the whole enterprise, from its lowbrow slapstick ethos to his character’s motivations. Reed (Daniel Hugh Kelly), a graduate of the Royal Academy of Dramatic Arts, who left a respectable acting career, is shown constantly at loggerheads with producer-writer-creator Sherwood Schwartz (Michael Tucker), over performing “this GILLIGAN’S ISLAND crap.” Nonetheless, he loved “his” six kids and treated them like his own family, giving fatherly advice and protecting them from the industry. He advises Greg about “acting” as a craft, and laments, “It will be very hard for people to take me seriously after THE BRADY BUNCH.”

Reed’s homosexuality (which was publicly revealed only after his death) made him highly uncomfortable making out with his onscreen wife, Carol (Rebeccah Bush, playing a very authentic-looking Florence Henderson). The cast and crew would become aware of Reed’s orientation during the BRADY stint, but it was never discussed; it was a different time. Movie does not cover his tragic death from cancer (which was linked to his HIV-positive status, because – sensationalism), but is dedicated to him: In Memory of Robert Reed 1932-1992.

The cast inhabit their roles well, so become more visually authentic as the movie progresses, with young Bobby Brady (Scott Lookinland) played by the son of Mike Lookinland, the original Bobby. Mike does a cameo as a cameraman (his actual day job) during the funniest scene in the movie, where Greg and Marcia are meant to behave like brother and sister onscreen, yet interact like urgent lovers unintentionally. (I wonder if this ever happened, and how it was played, because this scene is ostentatiously played for broad laughs.

Kaitlin Cullum is Eve Plumb (middle sister Jan), Ricky Ullman is Christopher Knight (middle brother Peter) and Carly Schroeder is Susan Olsen (youngest sibling Cindy). Whenever the kids are on the phone to one another, their headshots become separated by blue squares – homage to Schwartz’s innovative series opening credits. This cast resembles the Bradys much more than the cast of THE BRADY BUNCH MOVIE (1995) – except for Christine Taylor’s dead-on Marcia!

It wasn’t just Greg and Marcia – there was also Jan and Peter, Jan having the crush that Peter would only “wake” to later. And even Cindy and Bobby tried it on, to be like the grownups! Unintentionally, these six poor kids were damaged by the network: only being around their TV siblings, and being so busy therefore not growing close to any other kids their age, and living through the adventures that filmmaking brings, they were all hormonally funneled toward one another. That’s the most tragic aspect of this love story gone awry.

After being snubbed by McCormick one night, Williams decides to go for broke and ask Henderson out on a date: “suddenly, I looked at my TV mom differently…” Amazingly, she said yes. Again, contra to schoolyard rumor, it was only one date to a fancy restaurant (with every patron recognizing them as they entered, Williams 15 years old, escorting a woman at least twice his age). Afterwards, he gives her a surprise peck on the lips goodnight, before she warns him off gently. And that is that. 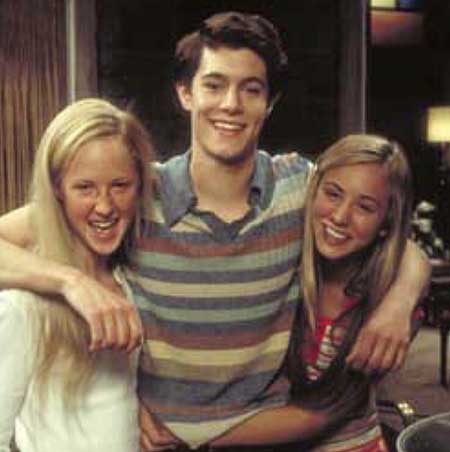 Hendrix said, “…Cos if my baby don’t love me no more, I know her sister will.”

Movie burdens the Brady kids with a manager, Eddie Fontaine (Mark Kassen), who may be fictional or a composite character, who fills their heads with ideas that rankle Schwartz. It is Eddie who gets them a recording contract and puts out The Brady Kids albums, then takes them on the road (even though none of them were really song-and-dance performers and had to work hard at it), touting “the beginning of a Brady Kid empire.” As Williams narrates, “People filling your head with that – you begin to believe it.” It gets to the point where Williams demands of Schwartz that each of their episodes include a musical number to promote their albums and tours. Irksome. And urk as well, if you know their swaying-hip song-and-dance numbers that make you feel dirty…

It is Eddie who calls Williams to tell him of the demise of that fledgling empire: the crushing reality of cancellation of Season 6.

I still can’t figure if GROWING UP BRADY is a well-made TV movie, or if it just flicked our Marcia nerve sensually enough to have us believe it is quality filmmaking.

Movie is bookended by real Barry Williams, who braces himself for another That Question, and is surprised when asked, “Whatever happened to Tiger?” Well, movie explains that too – the Brady dog was killed accidentally after Season 1; when his replacement for Season 2 proved uncooperative, Tiger was simply written out. Doggy style.