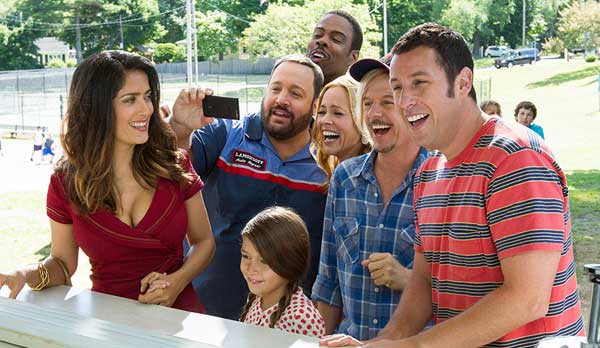 Kevin James takes a photo of Salma Hayek’s ass, the only ass onscreen worth taking a photo of.

Would you like a little movie to go with your pee jokes?

The four friends from the last movie (played by Sandler, Chris Rock, Kevin James and David Spade) have inexplicably decided to all reside in the same small town they grew up in, after having left it to pursue their careers. In the last movie, they all rendezvoused here to pay homage to their dead high school coach; now, there’s zero reason why they are living here pursuing lives as layabouts and wieners, as they meander through a script (by Fred Wolf, Sandler and Tim Herlihy) as unrealistic as it is unfunny. About one hour into GROWN UPS 2, we give up all hope this dog-queef of a movie will come anywhere near a story, and go do something more productive, like rubbing the lotion on its skin or it gets the hose again.

There is a scene of unbelievable ignorance, which sums up how this movie reached its audience: Maria Bello and Kevin James show their small son math flashcards, like 8+6, to which the son answers “38” or some such idiocy. They PRAISE him. On it goes with the flashcards, every answer wrong from this idiot child, yet receiving PRAISE not correction, because they “don’t want to destroy his confidence.” Audience, you do realize that kid is YOU? Never learning the difference between quality and stupidity, the stage set to grow up an Adam Sandler fan; a Venn diagram overlapping Republicans as far away from facts as possible.

Sandler himself plays a normal guy, and I am thankful for this small mercy, as I quite like his Everyman demeanor, but Kevin James quickly cancels that out with his fat-based tryhard pratfalls.

As with the last movie, there is ONE SINGLE MOMENT that achieves any kind of empathy or resonance with normal human beings. Sandler reaches a last straw seeing his son bullied, so in order to show him that a bully needs to be stood up to, he takes on his own bully from ages past – Steve Austin. As they face off, Austin, who “has a son in Afghanistan” realizes “we’d do anything for our sons,” and whispers to Sandler that he would take a dive. It is so touching, I swear I almost cried.

Then Kevin James does something fucking stupid.