This movie should be spanked on its botty and sent to bed with no supper. 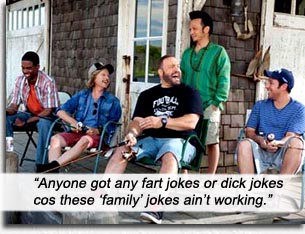 Written by Adam Sandler and longtime collaborator Fred Wolf, directed by longtime Sandler director, Dennis Dugan, GROWN UPS stars Sandler, Chris Rock, Kevin James, David Spade and tiresome tool Rob Schneider. Now I ask you: with the wealth of filmmaking experience in the room, why is this movie about as smart as a 12-year-old boy?

Five friends reunite for the funeral of their school coach and spend the weekend trying to be funny; between the ad-libs and the unfunny script, nostalgia is a bitch.

GROWN UPS has but one “moment” – that magical point in even some of the worst films where story, acting and emotion all comes together and bites us on the humanity bone: before taking a winning shot in the climactic basketball game, Lenny (Sandler) takes a look at his childhood rival, Dickie (Colin Quinn) and at Dickie’s trailer trash wife; in a slow motion moment, Lenny sees how desperately Dickie wants to win this meaningless game and assesses in that split-second how Dickie’s life might have turned out differently had he won a pivotal game against Lenny as a child. It’s a touching moment, as Lenny realizes how Dickie’s life was stuck on the low road, while Lenny went on to a successful career and a hot wife (Salma Hayek). Lenny decides to throw the game, to let Dickie “feel what it was like to win for a change.”

This moment would have read more emotionally had the movie been made by someone who understood movie structure. The miniscule foreshadowing of this moment was shunted aside by pee jokes, tit jokes, boring family activities and Kevin James substituting fatman-dancing for comedy.

Maria Bello plays Kevin James’s wife and is the absolute hottest thing on four decades. Even though 20-year-olds try to monopolize the perve angles (especially plastic blond Madison Riley), pretending to show off their bodies like they enjoy sex or something, you know that Bello is the Real Deal who would never object to a postman ringing twice with a manly back door delivery.

On that same tack, my, but that Maya Rudolph is one ugly woman! She plays Chris Rock’s wife, and she may be a wonderful person, a talented comedienne and more financially successful than I am, but GOD DYAM if she doesn’t have a face to sink an oil tanker. I’m just putting it out there, for all those people who are thinking it but too pc to say it. And she’s pregnant! Who was the half-blind guy who tripped over in the dark and accidentally spat DNA into that swamp thing? Eurph!

The only gag in GROWN UPS that actually works is the scene where the five friends watch Madison Riley bend over her car engine in short shorts, all agreeing that they shouldn’t be staring together, but taking shifts: the tree, the house, the lake, her ass – until they all end up staring at the tree together, no one on ass duty.

Then again – considering how many of them make rumps of themselves, they’re ALL on ass duty.