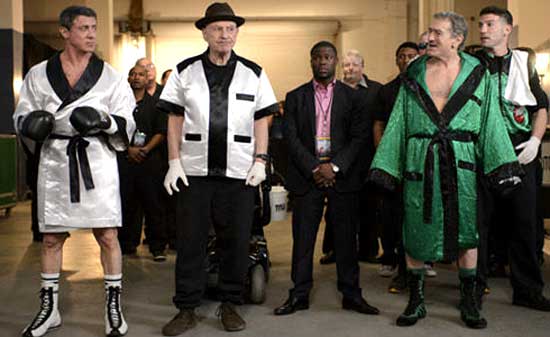 “Where’s the Ladies Room? I gotta siddown and take a wicked piss.”

It’s Rocky versus Raging Bull in a battle to the retirement community. It’s old versus older in a rampage to the replaced hip…

Sylvester Stallone and Robert De Niro square off as old – and I do mean old – boxing rivals who ended their careers unbeaten, except by each other – once each! Now, thirty years later, their paths cross and they decide through their Alzheimer’s and Arthritis and dementia that it’s time for one last GRUDGE MATCH.

Henry “Razor” Sharp (Stallone) has lost his fortune and is tired, cynical, and trying to forget boxing by not even having a TV where he may accidentally see some of it (his poverty level is somewhere between ROCKY and ROCKY V). Meanwhile, Billy “The Kid” Mc Donnen (De Niro) runs a successful car dealership and is happy-go-lucky about boxing, bitches and boning. He’d love a rematch due to some pathological need to “fight Razor at his best.”

Kevin Hart is promoter Dante Slate Jr, son of their original promoter, who sees an opportunity to make money with these boxers through a video game for the 30th anniversary of their last match. Alan Arkin is Razor’s acerbic old buddy and begrudging trainer. Kim Basinger is involved with both men, simply to create screenwriter connections for the audience to roll their eyes to. (It gives Razor motivation to re-punch The Kid when we discover Kid slept with Razor’s girl back in the day. And who’s the girl? Basinger, of course. She hasn’t moved away or is married and not interested in either of them, or is old or crippled or dead; no, she’s still smokin’ hot, single, and wetter-than-ready to dive into Razor’s ‘roided embrace again.)

Jon Bernthal is Kid’s estranged son, who provides some semblance of redemption arc when unrepentant Kid has to repent about not being there for him blah blah…

During the videogame voiceover session and motion-capture, both Razor’s and The Kid’s hatred for each other escalates into plans for a real life bout, which Dante dubs “Grudgement Day.” And all training montage breaks loose.

GRUDGE MATCH would not even exist were it not for the legacy of its stars. The movie is predicated on our abiding love of, and nostalgic reminiscence of, ROCKY (1976) and RAGING BULL (1980). A million eye-winks, a million references, a million underhanded jabs at our rose-colored memories of unbound youth and our biceps being toyt and our abs being washboard. Do the Under-30s have any emotion at all linked with those old punch-fest properties? Hey, Under-30s, FYI: Stallone and De Niro played BOXERS in those movies, fictional Rocky Balboa and real life Jake La Motta, and the filmmakers (director Peter Segal and writers Tim Kelleher and Rodney Rothman) are banking on us being well-accustomed to those icons for the movie to pull off its audacious plot. Without this knowledge, GRUDGE MATCH ceases to be a satire and becomes two sexagenarians with sagging titties girl-slapping each other.

Funniest sendup is Razor (Stallone) just about to punch a side of beef hanging with its dead brothers and Arkin yelling at him, “Hey whoa, whoa! We’re just here to buy lunch! You don’t have to punch everything!”

We also see The Kid performing a standup routine at his dealership. A nod to Jake La Motta’s comedy aspirations. 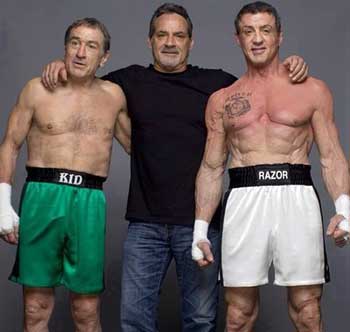 There are quite a few age-ist laughs (re. Stallone, De Niro, Arkin), as well as short-ist laughs (re. Kevin Hart), and, of course, boxer-ist laughs re. the overarching Rocky-Raging  connection (drinking eggs for breakfast, dragging a truck with rope, soaking hands in horse piss…uh), with a running gag of the two boxers always ending up on YouTube during their promotional appearances due to their penchant for actually getting into scuffles with each other.

But it must be admitted, both men are in terrific shape: Stallone has nothing to prove, his whipcord body speaks volumes in his recent body of work; and we see De Niro has held it together as well. At 67 and 70 respectively, I’d wager both these guys have tighter titties than Basinger…

It’s unfortunate that we fall out of the movie in its opening scenes, where we see supposedly vintage footage of Razor and The Kid in bouts from the 80s. They’ve CGI’d Stallone’s and De Niro’s young faces onto young boxer bodies and it is the absolute worst CGI you will see in cinema today. It’s 2013 guys: use better computers, spend more rendering time or buy some new apps. When they did this to Stewart and McKellen in X-MEN 2, it was subtle; when they did it to Bridges in TRON LEGACY, it was kinda creepy; when they did it to CAPTAIN AMERICA, it was getting pretty darn good – but here, it’s like computers have not been invented yet, and we might as well go back to pagers and grunge music.

Technology in a GRUDGE MATCH with reality. Reality wins.