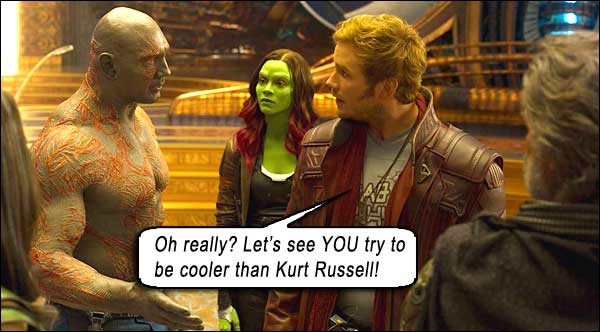 Badness and Sadness on the Superhero Superhighway.

It’s like that rock star yell: “Are you having a good time?” And despite the mistakes, the bad harmonies, the hot sweat, the elbows in your groin, you scream back, “YEAH!” Because the energy of the performance and the sincerity of your heroes make the journey worthwhile.

GUARDIANS OF THE GALAXY VOL.2 captures that same spirit of eager fire and innocent fun it broke over us so brilliantly in its predecessor. This sequel might be some kind of masterpiece, but we hardly notice, as we ogle at the bombastic spectacle and vibrant colors, sassy characters and outlandish acrobatics, as the Guardians once again save the galaxy from a malignant evil.

All the principals reprise their roles from the 2014 original: Chris Pratt returns as Peter Quill (aka Star Lord), the affable Earth native with the ambiguously galactic birthright; Zoe Saldana is green-skinned Gamora, rebel daughter of Thanos; Dave Bautista is Drax, the mauve-muscled alien with no social filters; Bradley Cooper is the voice of Rocket, the raccoon-shaped weapons expert, and Vin Diesel gets his voice pitched-up for 10 lines as Baby Groot the tree creature.

And speaking of rock and roll, movie opens in 1980, as a musclecar with the top down cruises a sunny country road, the strains of Looking Glass’s Brandy wafting up to us, as the camera closes in on the couple in the car – a cool ‘70’s chick singing along to the radio, and a young, long-haired driver flashing a roguish smile we know so well — the hell?!–

It’s KURT RUSSELL! In his THIRTIES!

A few years have passed since effects mavens tried to de-age Patrick Stewart and Ian McKellen in X-MEN 3 (who wound up looking like sex dolls), or Jeff Bridges in TRON: LEGACY (who wound up looking creepy). But Kurt’s youth doesn’t look one bit like CGI – this looks REAL! (Apparently it only took a tiny bit of makeup and minimal CGI to pull off this effect. Oh, Kurt, you ageless demi-god!) Put a pin in Young Russell for now…

After killing a giant monster for a race of gold-skinned people called Sovereign (led by Elizabeth Debicki), the Guardians receive Gamora’s estranged sister Nebula (smokin’ Karen Gillan) as payment – then must flee for their lives when Rocket steals from the Sovereign the very articles they delivered. Thus, the Guardians retain their breakneck ethos of being mercenaries and thieves. And bickering family. (The “family” theme is sometimes pushed rather uncomfortably, but is made up for by all the more powerful themes handled more subtly.) While Rocket argues with Peter Quill over who is the better pilot as they dodge the Sovereign fleet, Nebula and Gamora argue about wanting to kill each other. Then a massive blast destroys the pursuing Sovereign fleet with one swipe, and we see it’s Kurt Russell – old – coming outa the sun like Han Solo, sky-surfing on the outside of his ship! (Oh, Kurt, you lovable badass!) 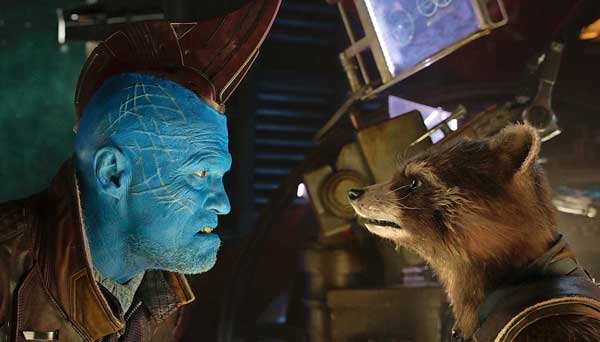 When the blue squid’s crest is up, he’ll mate with anything– sorry, I’m thinking of Dr. Zoidberg.

The Guardians confront this demi-rogue after crash-landing. Kurt is Ego, a Celestial, one of the Old Gods. (The Guardians visited Knowhere in Vol. 1, which was the moon-sized severed head of a Celestial.) And Ego claims to be – Peter Quill’s father! (Which explains how Quill was able to hold an Infinity Stone in his hand without disintegrating.)

While Rocket fixes Quill’s busted ship (named the Milano, yes, after Alyssa), Ego transports Quill, Gamora and Drax to a planet named Ego. The embodiment of his will, where the strains of George Harrison’s My Sweet Lord only add to the LSD swirl of the sinfully toxicolorful planet. And there Ego explains how and why he got biblical with Quill’s mother.

And Brandy comes floating back on the wind… The lyrics seem to point the way to this very film. Even just a snippet tells the story of Quill’s mother and Ego: “He came on a summer’s day / Bringing gifts from far away / But he made it clear he couldn’t stay / No harbor was his home…” Ego tells Quill he truly loved Quill’s mother, “She knew all the words to all the songs on the radio.” (Director Kevin Smith cites this as proof that someone wrote that line from personal experience. Yes, ladies, these are the things a man falls in love with!)

But there is something sinister about Ego and his narcissistic agenda, that Quill refuses to see, due to being enamored with finding his true blood, and playing catch with a ball of energy…

In the event of grown men weeping like babies, fast forward to Action Posedown.

And that’s where this movie kicks us in the weeping nerve time and again. Somehow, writer-director James Gunn hits home run after home run with each seemingly shallow, boisterous character. He underpins every emotional scene with a classic rock soundtrack that transports us directly to Full Weep.

Quill lamented he never knew his real father, had no one to play catch with, and here, on a distant world, he finds his inner child.

Michael Rooker returns as blue-skinned Ravager Yondu, who took in Peter Quill as a boy and showed him the ways of the Colorful Pirate, now shunned by the Ravager community (including Sylvester Stallone as Ravager Stakar); on the periphery of the storyline, he would become its focal point for its message of heart over head. Victim of a mutiny, he and Rocket end up as prisoners sharing a cell, and in a heated exchange that seems to tip into serious hurtful insults, we are as shocked as they are when we discover the core of their pain, and realize they share similar pasts (slavery) and deal with it the same way (isolation). Thus, Yondu – a certified baddie in the first film – graduates to badass, as he and Rocket (with Baby Groot tagging along, in a tiny spacesuit) stride out of the cell in Hero Redemption Slomo, his whistling arrow tearing through the mutineers, over Jay and The Americans’ Come A Little Bit Closer.

Nebula and Gamora forge an uneasy sisterly alliance against their father, after a badass battle of Girls Gone Spacewild, while literal-minded Drax will find a few moments of empathy with an empath, Mantis (Pom Klementieff), Ego’s concubine. And even Quill and Gamora eventually admit there IS an “unspoken thing” between them. 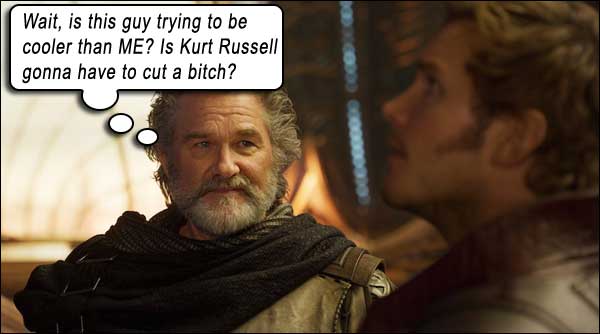 I wanted to like this movie less, because it felt like many segments were coasting (Rocket setting off explosive booby traps on Ravagers), and some of the effects were threatening to get overdone (Ego’s visual 3D PowerPoint presentation of his time on Earth), but then another heavy emotive sequence would stealthily wrap us in its embrace. It’s a wondrous feat of storytelling, Movie Maniacs; while we are distracted by the shattering explosions and carefree comedy and taser-faced dialogue, each character becomes whole. And in the grand battle finale, just as the CGI threatens to become TRANSFORMERS eye-mutilating, Gunn plays a trump card that shatters our Weeping Nerves…

To avoid spoilers, and for those who know, it’s all in this one line: “He may have been your father, boy, but he warn’t your daddy.”

With his audience wracked in sweet sorrow, Gunn draws the circle complete, as the tale of Peter Quill’s father comes-around-goes-around to its unexpected, tearful resolution, underscored with Cat Stevens’ immortal Father and Son. (Is there anybody in the world who does NOT weep when they hear this song?) James Gunn rests his case, yeronner. An elbow to the groin would bring no less tears…