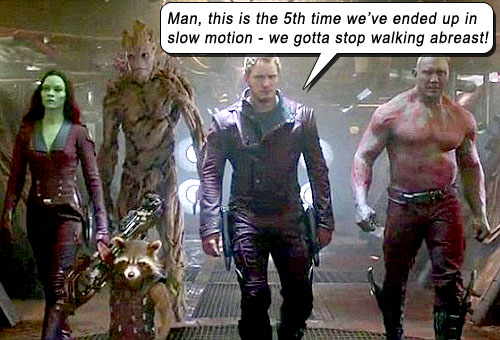 He’s committed to the ridiculous in a way that is sublime.
— Joss Whedon on James Gunn helming GUARDIANS OF THE GALAXY.

It’s hip, it’s modern, it’s retro. It’s colorful and calamitous. It’s THE GUARDIANS OF THE GALAXY!– The Who of the What now?

Marvel Studios throws the dice and comes up Ee-Oh-Eleven with an unknown property. Well, not unknown any more. The Guardians of the Galaxy comic series (first published Jan 1969) was never in the marketing league of Spider-Man, Iron Man or even Wolverine, and we gape in senseless wonder at the chutzpah of the far-seeing (and obviously connected) individuals who carved a new super-verse out of whole cloth. Ending in triumph, as GUARDIANS (according to Wiki) is the highest-grossing superhero film of 2014. 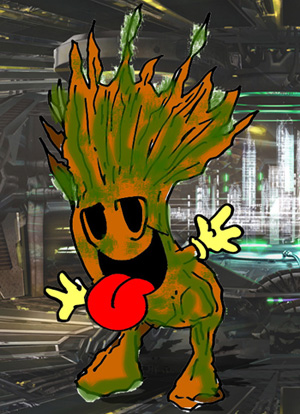 Earthling Peter Quill (Chris Pratt, THE LEGO MOVIE, body-buffed and Han Solo-ed to the max) is a space pirate who steals a mystical Orb that seemingly everyone in the universe chases him to retrieve. He acquires the Orb in a manner much like our pal Indy in that film starring Han Solo. Movie’s unique tone smacks us in the face with its breezy insouciance and nostalgic soundtrack, as Quill pops a cassette tape into a Walkman and dances through the caves to his goal, accompanied by Redbone’s Come And Get Your Love.

You’d be hard-pressed to find a more crucial opening sequence for a superhero movie, and one better-played. They’ve actually got Quill disco dancing through the opening – talk about walking a fine line – I mean, Tobey danced and look what happened. With Quill swishing his hips they establish immediately This ain’t Iron Man, This ain’t Wolverine, hell, This is hardly even Marvel, as the movie’s roguish sense of humor launches us to a headspace far removed from those iconic super-swaggerers. We can hardly even believe this is the doughy guy from PARKS AND RECREATION, as Quill is devil-may-care funny, canny, unlawful and a lovable lump all rolled into one. And he wants to be called Star Lord… uh, scratch the “canny” bit. His Valley Girl idiom overlaps the techno farscape, as his first lines to his ambushers include, “Dude, chill out!”

Through misadventures aplenty, Quill joins forces with a group of warriors, all with one thing on their minds – killing each other for the sake of cash. And that’s the dynamic that sets the Guardians apart from other “superheroes” – they’re super anti-heroes. Not one of these protagonists is altruistic, not one would consider battling evil for goodness sake; through this pulsating, laser-throbbing bambalam, they are committed to being the outlaws we meet them as, and are unintentionally thrown together to Save The Galaxy only because, as Quill emphatically declares, “I’m one of the idiots who lives in it!”

Zoe Saldana (AVATAR) is Gamora the flying turtle, who is friend to children– sorry, thinking of GAMERA… Gamora, the green-skinned assassin pitted against Quill to steal the Orb. His abs make her join him. Her green groin makes him save her; as STAR TREK and LOST IN SPACE taught us, human males harbor an inordinate lubricité toward green-skinned bitches.

Dave Bautista (aka Batista, six-time WWE world champion) is red-hued Drax, simple in mind, decorated in body, an escaped prisoner harboring a vendetta against Gamora and her power-mad father for killing his family.

Rocket the raccoon-like-creature (voiced by Bradley Cooper, AMERICAN HUSTLE), is a CGI fur-splosion that isn’t really a raccoon but made to resemble one by his genetic creators. This diminutive weapons expert is a common thief, along with his sidekick Groot, a CGI tree-being voiced by Vin Diesel. Groot repeats only one line, and though he is saying many things, the manifestation of his speech to our human ears always sounds like, “I am Groot!” He is the comic relief that only his impetuous pal can understand (think: a better-written Chewbacca); paired with the biggest loudmouth he is the quietest and most introspective, feeding off his own leaves at times (is that kinda like eating your own hair?); he is the beating heart of this thrill ride. 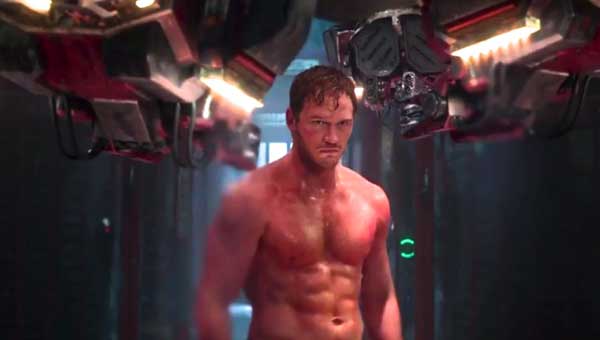 “Stop looking at his abs and SHOOT him!”

For all their bravado and fisticuffs gusto, all these outlaw anti-heroes are damaged in some way. Their partnership allows them to reconcile those scars, as when Quill starts the healing with his pep talk: “You know what I see when I look at us? Losers! …Uh, by that, I mean people who have lost something…”

Space invader Yondu is a blue-skinned alien who adopted Quill as a tragic boy. Played by Michael Rooker in probably the most commanding, badass role of his career, his weapon of choice a psychically controlled lethal arrow, Yondu also wants the Orb. And to show Green Arrow who’s da boss.

Thanos’s Torgo is Ronan the Accuser (Lee Pace, Legolas’s father in THE HOBBIT). He orates Shakespearean, carries a deadly thunder-mallet, and is way more terrifying than most villains because he doesn’t just kill you, he accuses you first.

Djimon Housou is bounty hunter Korath, mighty wearer of painful contact lenses. There’s Glenn Close as leader of some planet, John C. Reilly as her bottom bitch; there’s Benicio Del Toro in an ominous cameo as The Collector, Peter Serafinowicz (the concierge in COUPLES RETREAT) as a pilot in a poignant death-struggle, and there’s Stan Lee as “Xandarian Ladies’ Man.”

All these characters whizbang through this kinetic storyline deftly, with powerful and poignant payoffs to their participation. Written by Nicole Perlman (THOR) and James Gunn (SUPER), and directed by Gunn, GUARDIANS is heavy on dark comedy, with explosive production values, excellent direction and thrilling action scenes; people narrowly escape from explosions, walk in slow motion towards the camera, save their loved ones as they learn sacrifice, discover how to work as a team, are inundated with 80s pop culture references and jive to Bowie’s Moonage Daydream and Blue Swede’s Hooked On a Feeling…

GUARDIANS OF THE GALAXY is an unexpected lightning strike that needs to be captured in that mythical bottle, or its bedazzlement will be lost to the galactic slipstream… As Groot might say, paraphrasing Roy Scheider in JAWS, “I am Groot!”

Uh, that means, “They’re going to need a bigger bottle.”

POFFY redbones GUARDIANS OF THE GALAXY: 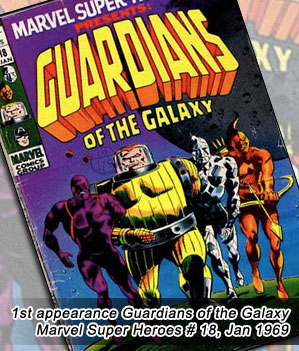 Dice Casting.
Without audiences realizing it (because it was done so well and pulled off successfully) GUARDIANS is one of the most daring “counter-intuitively” cast movies in years. Most cited is Michael Keaton as BATMAN. Likewise, even Chris Pratt never thought he’d score the lead here, yet not only does he score it and do a great job, there’s another actor in the cast whom we would think might have automatically been offered the lead role for his higher recognition, veteran status and wetter-panties chest – Bradley Cooper. Instead, Cooper is relegated to merely the voice of an animated character – even though Pratt is more well-versed in animated characters, playing the lead in THE LEGO MOVIE!

Vin Diesel, renowned action star is relegated to the voice of Groot, while the starring role that we would automatically bequeath on the muscle-bound Diesel is filled by a lesser known muscle-hound, Dave Bautista as Drax. For the same Cooper-related reasons, we would think that these roles would be reversed, but the filmmakers saw things differently.