Still Racist After All These Years… 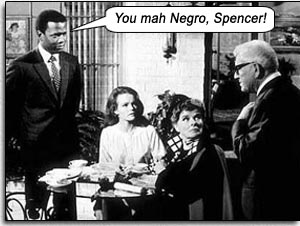 GUESS WHO’S COMING TO DINNER is meant to be a hammer against racism. Unfortunately, it only illustrates the filmmakers’ racism without them even realizing it. In one line of dialogue, the film put its foot in its big whitey mouth:

Joanna, the enabled white girl, says, “It never occurred to me that I would fall in love with a Negro.”

Did she just say that? Oh no, she di’nt! That was this movie’s version of, “I have a black friend.”

We can’t fault her for “negro,” as that was the terminology of the day; we’re angling on her attitude and phrasing – the amazement in her statement, as if interracial feelings are “unnatural”; as if she was brought up to fall in love with the “right” race and somehow went all liberal and fell in love with a “forbidden” species. (As ignorant as Republican mannequin-faced moron, Rick Santorum in 2009, equating homosexuality to gateway drugs, as if a man loving another man would lead to men marrying dogs.)

The movie does not collapse for her ignorance, but we are now aware that no matter how “noble” the intentions of the filmmakers, their hearts still pump slaver blood.

GUESS WHO’S COMING TO DINNER is well made and Tracy and Poitier are compelling, imbued with grace, humor and intelligence. Movie is meant to showcase the younger generation as open-minded enough to consider mixed marriages (of course, that generation are now picking up Social Security). The irony is that the supposed bigots (the Draytons, painted as mildly unaccepting at first) and the supposed reverse-racists (John’s black parents) – are NOT. The biggest bigot is the person who represented what the filmmakers thought of themselves (tolerant, intelligent, hip) – Joanna!

And the filmmakers keep proving my point: In portraying Poitier as an accomplished doctor, writer William Rose and director Stanley Kramer think they can now get away with stereotyping Isabel Sanford, the Draytons’ black maid, Tillie, straight from a Shirley Temple movie or GONE WITH THE WIND, widening her eyes and exclaiming such “negro-isms” as, “Yassuh, Missy! Dem white folks sho’ be!” or “I don’ unnerstand nothin’ no mo’!” Yes, that’s exactly how African-Americans talk!

Of course, the filmmakers counteract their racism by having a secret weapon in Poitier, whose dynamo presence and ferocious animal energy more than made up for their latent bigotry. The Black Brando. Poitier’s Dr. Prentice doesn’t just speak, he spanks us with his whipcord dialogue, telling his disapproving dad, “Not until your whole generation has laid down and died will the dead weight of you be off our backs!” When his dad reminds him that if he married a white girl “in 16 states, you’d be criminals,” he retorts, “You think of yourself as a colored man. I think of myself as a man!” Statements like these make the movie the dambuster it is.

Matt Drayton admonishes his overactor priest friend (Cecil Kelloway) that the young couple have, “boxed me into a corner!” which they have, “threatening” marriage by leaving for Switzerland that night and marrying when they get there. Drayton maintains he will not act irresponsibly. He feels that Dr. Prentice, a traveler, mover and shaker in his 30s, may just be mismatched with his 23-year-old hourglass-shaped, fiery-haired, arm-candy daughter.

Not being an adult during this movie’s release, I have no visceral understanding of the impact it would have had on society. The priest says melodramatically, “The youth ARE this country. They’ll change this stinking world,” and Drayton replies, “Sure, maybe in 50 years – but not in your lifetime!”

He was wrong, in a good sense: Obama’s election came 41 years after this film’s release.

The filmmakers’ naïveté bleeds through again, as the priest claims “colored marriages last longer because of the extra effort required” – which is demonstrably untrue, even for those days.

But then – that is the point that everyone is missing: this young couple is MARRYING after only 10 days. As ridiculous an institution as marriage is, it should not be undertaken so frivolously by those who supposedly take it seriously; they’re chaining their ankles to the state without even having slept together (brave for its day to bring up this point). The movie would have wrapped more satisfactorily had all the parents just said, “No, you idiots shouldn’t get married NOT because of your races, but because NO ONE should get married after 10 days. Move in together first, give it a few months and get back to us – then we’ll give you our blessing or advice.”

In the film’s final minutes, “Spencer Tracy the man” shines through. All pretense of movie character Drayton seems lost as Tracy goes Tracy for the last time onscreen (he would die just days after wrapping this movie) and gives a monumental, minutes-long monologue that sums up the whole movie and half the Earth: he addresses everyone’s fears (“100 million people in this country will be shocked, offended and appalled at the two of you”) and concerns (“There is absolutely nothing that your son feels for my daughter that I didn’t feel for my Christina”). He mentions race only as an academic point, not a personal gripe. He leans toward preachy (“feel sorry for those people for their prejudices and bigotry and blind hatred”), dives headlong into maudlin (“two wonderful people who happen to fall in love and have a pigmentation problem”), and eventually skews the focus away from race by accusing his wife of being clouded by romance for the couple and not seeing all the angles – then concluding the young couple should be married “as long as they’re in love.” Uh, if that’s not clouded by romance himself…

And then they have dinner. Prepared by their black servant.