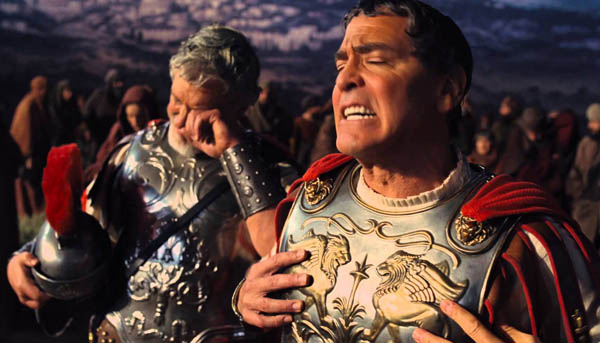 Would that it were so sequitur.

Maybe the fault is mine. Maybe I just don’t “get” the Coen Brothers’ vision of the world’s randomness and disjointedness, but here’s another of their writer-director efforts where I just can’t see the point, unless it’s to make George Clooney look like a lovable buffoon again. Or to watch Channing Tatum dance. In both instances, the crotches of our pants suffer intolerable cruelty.

HAIL, CAESAR! seems to be aiming at THE BIG LEBOWSKI but steps off the bus somewhere at BURN AFTER READING.

Set in the 1950s, HAIL, CAESAR! follows one flustered day in the life of movie producer Eddie Mannix (Josh Brolin), as he attempts to keep Capital Studios humming with forward momentum, amidst meeting with religious leaders who all disagree on the essence of The Christ, oversees a big budget musical (featuring Channing Tatum) about sailors lamenting they’re not going to see a dame for months, arranges an unwed female star to adopt her own baby to avoid scandal (Scarlett Johansson), drops off ransom money for the kidnapping of the studio’s prime star (George Clooney), replaces a serious actor with a rodeo cowboy (Alden Ehrenreich) to the chagrin of that film’s director (Ralph Fiennes), and fends off interviews with twin harpie reporters (Tilda Swinton as both Thacker sisters).

The misrepresentative trailer pushes the Baird Whitlock (Clooney) kidnapping angle, because he’s the most recognizable face, but the film is actually about Eddie Mannix, and the kidnapping is one small thing he must deal with in a day brimming with Hollywood dramedy.

Movie is a hodge-podge of intertwining throughlines that create entertaining vignettes, but when we pull back to examine the grand picture, we are lost amongst plot threads that don’t connect in any satisfying manner. For example, the Whitlock kidnapping is carried out by a cabal of communist writers (headed by Max Baker), seeking ransom (that they consider payback) because they are sick of big studios taking their work, not crediting them and not paying them appropriately. Eddie Mannix pays the ransom. And the bag of money promptly falls into the sea accidentally and is lost. The writers watch it sink with a sigh. End of thread. Viewers say Wha–?

Further, Whitlock suffers Stockholm Syndrome, in which he ends up siding with his kidnappers on communistic principles, espousing those views excitedly to Eddie Mannix upon his return, who divests Whitlock of his red leanings simply by slapping him across the face many times. Any further developments on infiltration subplots or, at the very least, comedic insubordination, is simply nixed when Whitlock walks out the door, apparently cured of communism by slapping. Viewers say Whaaa–?

Cowboy Hobie Doyle (Ehrenreich) is rumored to be sweet on a young dancer. They are seen together in public by the gossip columnist Thacker – then Hobie leaves the restaurant alone, following the kidnapper’s ransom and – young dancer just disappears from the film, her plot thread dropped. By now, we’re wondering whether the script consultant was ever consulted at all. 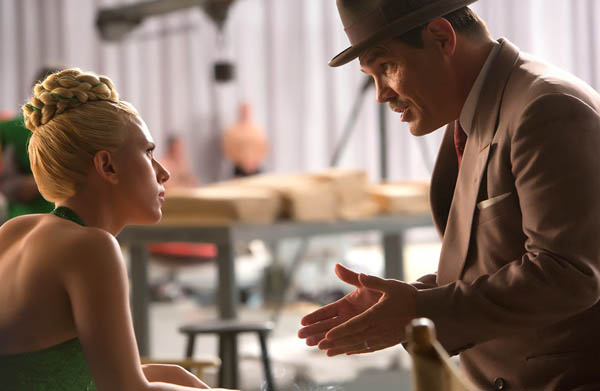 But all these plot threads are red herrings. No character develops past their comedic introduction. Because all their threads run through Eddie Mannix, who has the only arc, as he wrestles with the decision to continue in the capricious movie business that he apparently loves, or accept a job offer by Lockheed with better pay, hours and security. The Lockheed rep, practically begging for Eddie’s “fixer” skills in their company, inadvertently insults Eddie when he calls the film industry “make-believe,” portending Eddie’s ultimate decision… As if he didn’t have enough to worry about, the filmmakers seem to have written this “moral struggle” into Eddie’s character to add at least one dimension to this pretty shallow dark comedy.

Cameos: Christopher Lambert as a playboy director who is married; Jonah Hill as a fall guy with strong arms who is bonded; Frances McDormand as a chain-smoking editor who shouldn’t wear scarves; Clancy Brown as a centurion at the foot of the crucifix.

HAIL, CAESAR! refers to the film Whitlock is in the midst of making, about his centurion character meeting The Christ. (A funny point that Clooney is never out of his centurion garb the whole movie.) It’s BEN-HUR meets THE ROBE. And as he has been empowered to do in all his past partnerships with the Coens, Clooney gets to overact to his heart’s content, which he embraces with an ex-communicated nun’s fervor.

Narrated by the familiar voice of Dumbledore (Michael Gambon), HAIL, CAESAR! is brimming with meta references; we are constantly being made aware of the edges of the movie frame, with actors breaking character, equipment showing, slates, daily rushes, director asides (“Squint against the grandeur!”), and director Fiennes trying to demonstrate to American cowboy Ehrenreich how to speak (“Would that it were so simple”) in a hilarious depiction of the disparity between American drawlers and English Actors with verbal skills.

If you are old enough to remember the Hollywood studio system of the 40s and 50s, this roman a clef might hold some resonance for you, as I’m sure all these vignettes depict people who once were giants in the film industry. But most people old enough to remember “that Hollywood” are suffering from the dementia “that Hollywood” gave them, and the rest of the viewing public didn’t know there’d be a test or we would have studied.

Would that it were so simple.

In the end, Eddie decides to skip the more lucrative, sensible, steady – boring – job offer, and continue to manage the non-sequitur crises of his day with a spring in his step. It is, after all, only make-believe. And that’s entertainment. And entertaining.