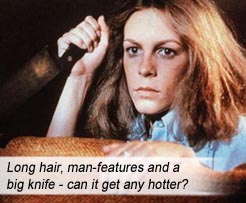 Arguably the first Senseless Knife-Kill flick; arguably the first “serial murder” movie mislabeled as “horror”; arguably the only movie to ever use a Captain Kirk mask to scare people. Intentionally rather than accidentally.HALLOWEEN is historical; like FRIDAY THE 13TH and a handful of seminal horror movies that spawned an unstoppable tide of sequels, it has entered into world consciousness. Unlike FRIDAY THE 13TH and many of those other seminal horror “classics,” HALLOWEEN is actually a reasonably good movie.

After all, John Carpenter writes and directs. And HALLOWEEN features two actual actors in its leading roles: Donald Pleasance, who intimidated everyone with his experience and British accent, and Jamie Lee Curtis, in her feature film debut, disguising her striking man-features with a luscious mop of brown locks and displaying a conviction and commitment to her pear-shaped bellbottoms that outshone all her idiotic teen co-stars.

HALLOWEEN has nothing to do with the American-celebrated night of October 31st, Hallows Eve; it’s just a nice night to kill teenagers having sex.

15 years ago, young Michael Myers in a clown mask knifed his sister and was sent to a mental institution, where he was treated by psychiatrist, Dr. Loomis (Pleasence). An adult now, Myers escapes, with Loomis hot on his trail, tracking him to the tree-lined suburb of Haddonfield, Illinois, his old home.

In the script, Myers was known only as The Shape, as Steadicams portrayed his Point-Of-View, Carpenter not allowing us many clear views of the psychopath whom Loomis describes as “pure evil” – which is a simple way of getting out of any real character motivation. It’s the movie version of “Because I said so.” So Myers can kill anyone at any time for any reason – because he’s Pure Evil, see? The stoic flesh-colored mask he wears is actually a spraypainted Captain Kirk mask – ahh, now that’s Pure Evil.

Myers stalks Lori (Curtis) for no reason (maybe cos he’s “Pure Evil”), until Halloween night when he starts killing teens in his hometown for no reason. Even Lori’s ultimate Running and Screaming relationship with Myers only comes about because he kills her bad actor teen friends across the road and she investigates in her pear bellbottoms.

In the late 70s, in theaters across the nation, HALLOWEEN’s iconic, chilling music guaranteed girlfriends would be grabbing their dates in the dark, instead of the other way round, and I’m sure the jump-scares gave teen boys valid reason to spill sodas over their date’s bra-less blouses. And offer to wash them back at his place…

Kids, have you learned nothing from this movie? Teen sex could get you killed. (Of course, the Puritans who run America needed an even stronger wrongful message that “sex causes death,” so they invented AIDS.)

Ironically, the man who was the inspiration for Dr. Evil saves the day, Ernst Stavro Blofeld.