Madness in great ones must not unwatch’d go.
— Shakespeare, Hamlet, Act III, Scene I.

It’s blasphemous and filthy and irreverent. And hilarious. 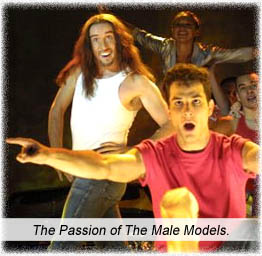 HAMLET 2 is GREASE slipping on the banana peel of JESUS CHRIST SUPERSTAR; a ripping satire on “inspirational teacher” films of all stripes, from DANGEROUS MINDS to DEAD POET’S SOCIETY.

Steve Coogan (one of the most underrated comedians in film today) is Dana Marschz, high school drama teacher and wannabe thespian, who takes his art quite seriously – “To act is to live” – but finds his career spiraling down a drain of bit parts and herpes commercials.

He lives with wife, Brie (Catherine Keener), and their roommate, Gary (David Arquette, in an obtuse role where Gary’s only purpose is to steal Dana’s wife and give Dana the second act rock bottom moment, “I lost my job! My wife left me!”).

With this ragtag band of first-time actors, Dana doggedly starts rejuvenating and resurrecting the school’s drama department, through the adversity of the drama budget being cancelled, his wife leaving him, and writing and producing his masterwork, HAMLET 2, a sequel to The Bard’s immortal play. Dana’s bizarre reimagining of HAMLET serves as a catharsis for his father issues.

The most foreboding gangsta in Dana’s class, Octavio (Joseph Julian Soria), turns out to be a powerful young actor with a searing sexuality, to Dana’s surprise and ours (the audience). This is the first of many clichés to be tipped on its head, with hilarious results: When Octavio’s father (Marco Rodriguez) forbids Octavio to take part in Dana’s play, it is not because he is that father trope who doesn’t want his son doing anything creative – it is because he does not want Shakespeare’s play sullied with a sequel! Whereas Dana thought Octavio’s father would be a poor, ignorant Mexican who needed educating, he meets a rich author who gives him salient reasons why HAMLET 2 is a ridiculous idea!

Dana actually meets the real Elisabeth Shue (as herself), sick of acting and working as a nurse. Being an inspiration of Dana’s, Shue enters the fold as his Muse. Amy Poehler kills again in a small role, as a lawyer willing to sue anyone who gets in Dana’s way of staging his magnum opus…

Hamlet (who is played by the dynamic Octavio) uses a time machine to go back and save everyone from dying, somehow hooking up with Jesus (played by Dana) along the way.

Play opens with the song, Raped in the Face, a favorite line of Dana’s on how Life is treating him most of the time. Then the boppy blasphemy of the title song, Rock Me, Sexy Jesus, where just the sight of Coogan as dancing Jesus in tight blue jeans and white wife-beater is enough to turn any Catholic Hindu… with numerous references to Jesus’s tight Teen Mod Bod: “but he’s got a swimmer’s bod like nobody do…” and “the guy’s got lats that make me feel gay.”

Coogan never says a word during this GREASE-like song and dance number, yet the moonwalking on water and The Crane as he “kicks Satan’s ass” is priceless.

When Hamlet tells Laertes of his time-travel plan, Rand (playing Laertes) utters the closest thing to a Shakespeare line, in an over-enunciated delivery that bears forbidden fruit covered in goat cheese: “Your madness must not unwatched go!”

Written by Andrew Fleming and Pam Brady (of SOUTH PARK) and directed by Fleming, HAMLET 2 hits some poignant thematic notes in Dana’s final act, with everyone being saved (Gertrude, Laertes, Ophelia) and Jesus advising Hamlet on forgiving his father, as Jesus must forgive his.

By the time the real Albuquerque Gay Men’s Choir is performing Elton John’s Someone Saved My Life Tonight, we’re choking up in a powerful climax, where Hamlet gets the chance to say “Father, I forgive you!” to a ghostly image; and Jesus descending from the rafters on a cable, Dana tragically lamenting, “Father, I forgive you… I forgive you.”

Though this be madness, yet there is method in’t. And this madness must not unwatched go…