Upping the Ante on Anti-Heroes.

Faster than a speeding bullet! More powerful than a locomotive! Able to leap tall buildings in a single bound! Look! Up in the sky! It’s a bird! It’s a plane!… It’s a drunk. 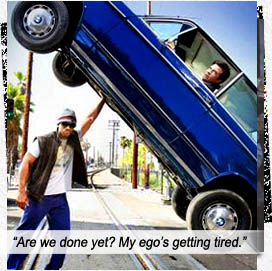 Mr. Fourth-of-July-Blockbuster (Will Smith) is HANCOCK (named after the epithet for signatures), endowed with all the powers of SUPERMAN, sans the gay Mardi Gras jockstrap. Fighting for Truth and Justice with a massive puss on his face (perfected since his deployment of it in I, ROBOT, 2004).

But HANCOCK is a “superhero movie” only on its surface. Deeper, where emotions are torn from desires and sorrow abides like ravenous bile, HANCOCK is a misunderstood gem. Written by TV writers Vincent Ngo and Vince Gilligan, and directed by Peter Berg (THE KINGDOM, 2007), HANCOCK is an insidiously brilliant take on the pitfalls of superherodom.

All humor stems from tragedy and HANCOCK is a Greek tragedy for the comicbook generation, using the superhero idiom as a launching pad for its exploration of isolation and the cavernous ache of loneliness.

The tragic figure is introduced as comic – movie opens with a hungover Hancock foiling a bank robbery by planting a getaway car on the spike of the Capitol Records building in Los Angeles, after some of the best flying and destruction scenes ever staged in CG technology, and some of the most banal repartee since the last Rob Schneider fart-fest disguised as a movie: “If you don’t stop shooting at me, I’m gonna put your head up his ass.”

We learn that Hancock is “the only one of his kind”; once a regular human, one day waking in a hospital with a fractured skull, no memories of his past – and super powers. With a tragic lament, “What kind of bastard must I have been for nobody to have claimed me?” In his pocket, two tickets to the movie FRANKENSTEIN. That was eighty years ago… now he walks the lonely Earth, ageless, directionless, with no one to relate to, who can comprehend the ramifications of his powers or immortality.

Smith plays Hancock’s melancholy note-perfect, in one of the best performances of his career. He never takes the self-pity so far that we dislike Hancock, yet his plight is permanently etched into his demeanor. How can he forget for one second his alienation amongst the throng?

Yes, it’s funny at first: a superhero in our midst would be super cool, but modern Los Angeles vilifies Hancock at every turn for the wholesale destruction that accompanies his heroic deeds (“Maybe he should go save people in New York!”); flying drunk with a bottle of wine; hurling a beached whale back to sea that hits a yacht; putting out a fire, then pushing in front of kids for an ice cream to cool down while half-naked; destroying property insouciantly during landings and takeoffs (this is the first superhero movie to take into account the physics involved in lifting off with such speed in opposition to the Earth’s gravity, i.e. the pavement would rupture with the great mass required to achieve that escape velocity). The satire works because we are so inculcated with superhero lore – yet we don’t see Hancock’s tragedy for the same reason: our inculcation erroneously informs us the dark aspects of a superhero’s life can’t get any worse than the Death-Of-Parents or some X-Factor-Creating-Implausible-Powers. We never consider it through the hero’s eyes.

All superheroes are alienated (from SUPERMAN to SPIDER-MAN and all the X’s in between – only few comicbook episodes getting it right), but movies only pretend empathy, and we only feel the alienation of the extraordinary beings through the prism of the ordinary ones.

With HANCOCK, the movie-makers plant themselves square in his stinky shoes and ask “How would *I* feel?” You can’t die, yet you can’t really “live.” You are basically moral, so you prevent some evildoing, yet whenever you act, there is puling over the damage rather than thanks for the deed. But that is the price of super deeds – not pretty or cheap, but monumental repercussions. So you drink. You remain disheveled, you disregard all manners and protocol – why care? No one can harm you. If you care for no one and no one cares for you, they can’t even get to you through someone else. You are too exhausted to examine what it all means or why you are at the center of it. Can anyone blame you for the puss on your face? Smith is all over this character like stank on his beanie.

A plot emerges when Hancock saves the life of a publicist stuck on a railway crossing, Ray Embrey (Jason Bateman, as dry as a Bond martini), in another excellent physics-based scene where a train smashes dead into Hancock with all the trailing carriages derailing. While most onlookers condemn Hancock for not “flying straight up” instead of dumping Ray upside down on another car, Ray is so thankful, he offers to PR Hancock’s image.

“Don’t come in too hot; don’t come in too boozy…Tell the cops they’re doing a good job.” Ray suggests jail time – a totally laughable proposition for this man who can fly and stop bullets, yet which would serve as a gesture he is sincere in improving his social persona; and maybe the public would miss him enough to appreciate what they had…

When Hancock meets Ray’s wife, Mary (Charlize Theron), something sparks and the two engage in Meaningful Looks in every scene – we soon discover… Mary is a superhero too! Hold your Roald Dahl-horses: this is not a “twist,” this is the Greek tragedy kicking in.

Mary explains: both she and Hancock are the last of “angels, gods, now they call us superheroes” and The Rules Sez if they pair up, they do the HIGHLANDER and become mortal. For 3000 years their kind walked the Earth, diminishing as they coupled and died. (I’ll refrain from the obvious gag about women killing you slowly once you commit.) Now she and Hancock have run into each other again and must make a life-decision… (Was it HER clocked him on the noggin eight decades ago?)

When Hancock is in jail, you’d think the other inmates would think twice before threatening a man who can hurl a whale; lucky for us, they don’t and we actually get to see one man’s head up another man’s ass!

The public miss Hancock soon enough and he is summoned from jail to foil a hostage situation, arriving in a blast of Superman fanfare, clean-shaven, in brand spanking homo superhero duds (courtesy of Ray), looking like Wolverine. Hancock’s makeover a success, the movie skews from slapstick towards its dramatic climax.

Many complain over The Villain (Eddie Marsan) being vapid. True. He is only a plot tool to spur Hancock into making a fateful decision on his immortal beloved. When Hancock is shot during a robbery and hospitalized to save his life, he realizes he has been around Mary too long – Mortality was bearing down on him – and The Villain is not the focus in the final scenes, it is whether Hancock will choose life or death. To die, having loved only a few hours in recent memory, or to live loveless forever.

No matter the decision, he loses. And this, faithful superhero fan who walked into the wrong movie, is the complex funny intriguing tragic conundrum of HANCOCK.