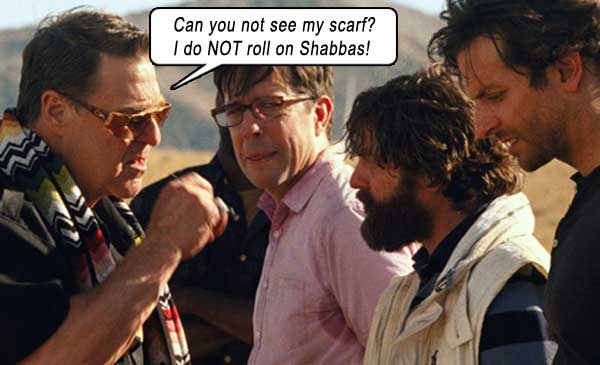 Sexpot, Dork and Clueless on another wild ride, with Evil Sprite in tow. Except this time, the evil sprite, Mr. Chow, is inadvertently the leading man! And the least likely of the “Wolf Pack” – man-child Alan – finds his arc of redemption!

The Wolf Pack – sexpot Phil (Bradley Cooper), dork Stu (Ed Helms) and clueless Alan (Zach Galifianakis), along with Wolf Pack-adjacent member, Doug (Justin Bartha) – are thankfully not dragged through the same “day-after-bender” situation, as they were in THE HANGOVER PART 2, but rather find themselves pawns caught in a game between two underworld sociopaths. In Vegas. Stu: “Someone needs to burn this place to the ground…”

One of the sociopaths is the squiggly Mr. Chow (Ken Jeong, who appeared as a B-gangster in the first HANGOVER film, then as a jagged plot disintegrator in PART 2; here, driving the plot and involved in all its twists); the other is bellicose kingpin Marshall (John Goodman, from whom Chow stole 11 million in gold, and who may keel over at any moment from ingesting 11 million in hamburgers).

While transporting Alan to a therapy center, the Wolf Pack is accosted by Marshall’s men and brought before Marshall, who orders them to find Mr. Chow (having just escaped from a maximum security prison, SHAWSHANK style), to retrieve his gold bars. Marshall holds Doug as collateral, effectively excluding Justin Bartha from the body of the script again, relegating him to damsel-in-distress once more. But it doesn’t matter in the least, because while the “action” plot revolves around Chow, the “redemption” subplot seeks to make a man of Alan. That’s why there seems to be nothing at stake in holding Doug. The same goes for Mike Epps, reprising his role as Black Doug, Marshall’s henchman, so when Marshall shoots him offhandedly, it makes not one ripple in our sentiments, or in the pool that Black Doug falls into.

Ken Jeong proves he can hold the camera’s gaze compellingly with a devious, deranged performance as Chow, a perfect mix of venom and pathos, playing the other characters like the bitches he terms them: killing his fighting chickens that he feeds only cocaine… and chicken, conning the Wolf Pack into stealing even more of Marshall’s money, partying like Caligula and killing like a hitman. It’s a powerful jumping off point for leading man roles.

And Galifianakis imbues his Alan with an aggressive innocence/ignorance that overshadows the seemingly well-adjusted characters of Phil and Stu. He starts the movie in the worst immature, baby-man condition he has ever been in – buying a giraffe and killing it accidentally. Alan’s father (Jeffrey Tambor) dies of a stress-related heart attack over him, and Alan gives a distracted eulogy where he wishes his mom had died instead. Alan’s family request the boys accompany Alan to therapy, and Alan only agrees to go because of Phil, with whom he has an unrequited ambiguously gay/hero worship relationship. Phil, in a throwaway line, calls the situation: “He just needs to lose weight and find a girl.” And it is this last happy accident (in the form of a trailer trash Melissa McCarthy) that prompts Alan to grow into adulthood. 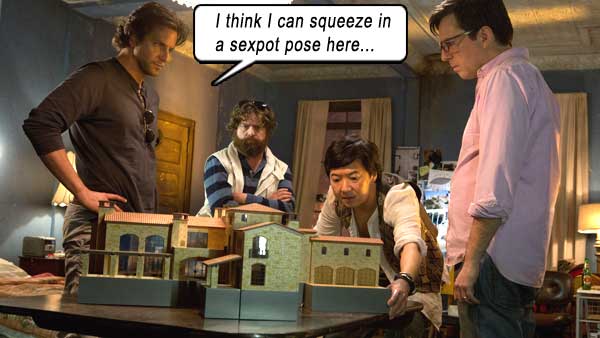 Heather Graham cameos as Jade, the stripper that Stu married in Vegas, raising her little boy, who is… Grant Holmquist – the same little boy who was the main baby that Alan carted around in THE HANGOVER. A touching scene when Alan comes face to face with this boy – a serious young actor with a great screen presence – and a part of Alan’s growth as a man.

Co-written by Todd Phillips (who directed all three) and Craig Mazin (who co-wrote PART 2), it is quite surprising how THE HANGOVER PART 3 sneaks up on us, amongst the shooting and screaming and sharing of lollipops (ooweh!). An original story that gives nods and winks to its predecessors, but as homage, rather than desperation. In keeping with tradition, this movie ends with a wedding – Alan’s! – and a post-credits scene that is the best hangover awakening of the trilogy. And the most amazing thing to me is… why this movie is so maligned. Every third movie in a trilogy does not have to perfunctorily occupy the same headspace as THE GODFATHER PART III.

People on computers in 2015 are losing their minds. The world is coming apart at the social media seams. So many recent movies released to groans and griping – THE HOBBIT, FANTASTIC FOUR 2015, BATMAN V SUPERMAN, AMAZING SPIDER-MAN 2… None of these movies has anything substantially wrong with them, the most vitriol coming from know-nothings who think that typing is tantamount to educated opinion.

As Phil says, “It all ends tonight,” meaning their predicament trying to capture Chow in exchange for Doug, but also in the meta sense that the last remaining member of the Wolf Pack has now been married off – their dynamic will never be the same, even if there is another sequel. But what do you social media twits care? Take a picture of your lunch, follow another meme, and text an emoji in lieu of words. That oughta prove how important your uninformed opinion is…