What happens in Vegas… uhhh, what happened in Vegas?… 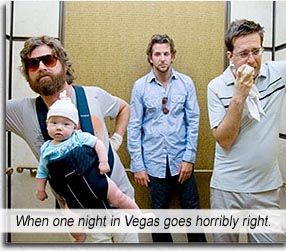 It’s not exactly BACHELOR PARTY (1984), but THE HANGOVER is a raunchy surprising stab at lewd, crude, nude immortality.

Phil (Bradley Cooper), Stu (Ed Helms) and Alan (Zach Galifianakis) are three friends who wake up in a Vegas hotel room the night after throwing their pal (Justin Bartha) a bachelor party. The room looks like it was just visited by Hunter S. Thompson: a couch is still smoking from being on fire, a hen wanders the premises, Stu is missing a tooth, Alan is missing his pants, there is a tiger in the bathroom, a baby in the closet and they can’t find the groom.

THE HANGOVER reeks of two writers (Jon Lucas and Scott Moore) getting hammered one night and trying to talk their way out of getting bitchbeaten by Chinese gangsters. Which is kinda what THE HANGOVER is – one long excuse, wrapped in a rationalization and pinched on the bottom of ludicrous. Todd Phillips (co-writer BORAT) directs this descent into surrealism.

Justin Bartha, who had nothing to do in those Nicolas Cage movies, here finds that even in a movie where he’s got something to do, they can’t find anything for him to do, as he disappears for most of the movie.

Through tiny successive clues – a hospital bracelet, the fact that they’ve got a police car instead of their own car, receipts from various vendors, the name of a wedding chapel – the three friends work their way backwards, revealing their night of debauchery piece by piece. The purposeful story construction wonderfully holds together and never flags, each vignette adding a new comedic element and also another piece to the puzzle.

The friends discover they were victims of the date-rape drug “roofies” – which their doctor calls “Ruphalyn” (upon looking it up, it is called Rohypnol or Flunitrazepam) – which accounts for their lack of memory. 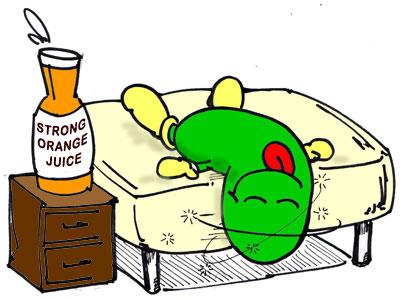 The three friends share such a tight dynamic we feel we’ve seen them before – and we have. The Three Stooges. Bradley Cooper is the smart, nominal leader, obviously the Moe of the bunch (I’ve not seen him in a more funny, more likeable role, proving he’s got the A-List chops to carry a movie), Galifianakis is the Curly, a wacky cuddly pudding bear using every ounce of his over-weight to milk the hilarity, also shooting his star into A-List territory), and the middle one – er, whatsisname? – is whatsisname here– uh, Ed Helms, the redheaded child of the bunch, proxy for literal redhead Larry. And like Larry, Helms does nothing special except bridge the other two. And his feature song (which describes the gang’s antics) is kinda stupid. But he does marry Heather Graham. She’s the stripper who owns the baby in the closet. (And guys, she gets her knox out for mammary purposes.)

Mike Tyson cameos and shows us why he’s still not an actor.

In a laugh out loud movie reference, when they need to buy back the groom from Chinese gangsters (Chinese kingpin played ever so scrotumly by Ken Jeong), Alan convinces them to gamble for the money, so descends to the casino dressed like Rain Man. (To bring it full circle, Justin Bartha did play a retarded guy in GIGLI. Now the world makes sense again!)

Rob Riggle (THE DAILY SHOW) as a taser-happy cop with the best line, as he calls for a “volunteer” from our friends, “Come here, handsome,” and chubby, bearded Alan steps forward – “No, not you fat Jesus! Slide on back there.”

Shot in and around sunny Las Vegas, with its spanky dialogue and breezy, insouciant verve THE HANGOVER exudes a heady excitement and an overall feeling of blissful meaningless fun – we all relate the Vegas skyline to good times; few of us work there, and even if we had bad experiences there, the boundless possibilities of Vegas still stir our blood to boiling.

And thankfully, as the friends drive into Vegas, with perfunctory aerial establishing shot, the source music is NOT Elvis’s obligatory A Little Less Conversation; instead Can’t Tell Me Nothing by Kanye West. Someone alert Nicolas Cage. The Elvis song, awesome and apropos though it is, has become such a cliché, that for this original departure alone, THE HANGOVER can date-rape me any night.