A few nights ago I accidentally watched HANNIBAL on cable. Surfing with the alien, my remote became my god, channeling for high-grade sewage, while I helplessly stood by and made bagels. (Cream cheese, m’dear?) Settling unnervingly on the couch with kippers and chardonnay, I found I had lost my towel. And the movie only made matters worse… Julianne Moore played Jodie Foster, while Anthony Hopkins played a psycho butler. And what’s with the lambs? (My brain hurts…)

The Violence Of The Hams. 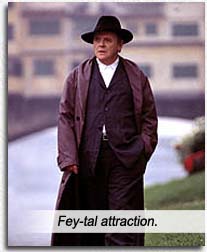 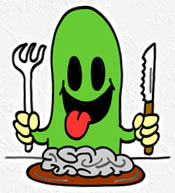 Ridley Scott, the brilliant director who helmed ALIEN, BLADE RUNNER and GLADIATOR, fell asleep during production and let a monkey take over.

Ray Liotta phoned it in. Maybe it was the fact that Lecter was ultimately going to slice open the top of his skull to eat his brain, which prompted Hair & Makeup to neglect giving him a decent hairstyle for this movie. Look up “pointy-headed freak” in the dictionary and there’s a picture of Ray in a production still from HANNIBAL.

Scott Glenn – where are you?

Thomas Harris, author of Hannibal, the followup to his Silence Of The Lambs, perpetrated the same sin that Michael Crichton committed in his Jurassic epoch – wrote the same book with a bigger bank account. Oh, he also put in some crazy unbalanced shit because…. well, because people were expecting him to put in some crazy unbalanced shit. Like the book, from which the movie-makers drew about 50% of their storyline, the film is… predictably gruesome. Evisceration? Coming right up. Biting people’s faces off? – you betcha! Blood spurting from severed arteries as if from a fire hose? Oooo!, sign me up for that!  Whereas director Jonathan Demme’s taut psycho-thriller, THE SILENCE OF THE LAMBS (1991), took us on a seat-gripping psychological foray into the masterfully manipulative mind of Hannibal Lecter, we’ve ended up in FRIDAY THE 13TH: THE HANNIBAL YEARS – a slasher film for the faux-cerebral; Jason quoting Shakespeare.

Jodie – I don’t blame you for not reconsidering, honey! Seeing this revamped version of her character, we realize that gone is the complex fledgling FBI agent we empathized with in SILENCE,to be replaced by a domineering, emasculating cyborg – Clarice Starling has morphed into RIPLEY! (No small blame aimed at this particular director!) – which accounts for Moore’s pants, at least. (Lest we forget, it was Ridley Scott who also embarrassed us with G.I. JANE, 1997.) Granted, the passage of a decade would see changes wrought in any character, but Starling’s “character” is missing in action in this movie, replaced by a stock sheaf of clichés and woman-empowering rhetoric. The film-makers have gone and done what the visionless HIGHLANDER money-grabbers did: compromised everything that came before, by everything that comes after. They even re-wrote the film ending in a vain attempt to draw Jodie out, but she made a correct decision in staying away, as the re-worked film ending is even stupider than the book’s ending.

The Saviors of HANNIBAL: the eponymous anti-hero himself, the droll, dread Anthony Hopkins (Violent Ham No.1) and that delectable chameleon of cinematic cheesedom, Gary Oldman (Violent Ham No.2), playing Mason Verger, a disfigured previous victim of Hannibal’s. Even with substandard directorial cohesion, weak dialog and Julianne Moore, some actors just can’t be stultified; any words in the mouth of the artisan Oldman turn to sweet, sweet, insane love-juice, whilst Hopkins savors each syllable like his now-infamous Chianti, deploying weight and depth by merely inflecting his voice, as other actors need to achieve these same standards of craft by screaming, shooting or taking off their clothes; as some insecure directors need to achieve this same level of impact by spending $40 million on computer-generated effects which waste everyone’s time and are irrelevant to the storyline, George.

The film completely ignored Mason Verger’s penchant for drinking the tears of children that he taunted into weeping. Even Eric Cartman went further than Ridley Scott, licking the tears of misery from Scott Tenorman’s face after he tricked him into eating his parents in a chili con-carnival.

In the book, Lecter and Starling sit down to a luxurious supping on detective Krendler’s brain, not simply one piece fed to Krendler. Though that was the best scene in the movie by far, it wasn’t nearly enough to make me vomit more than once.

Rather than regarding Hannibal Lecter as the psychopathic murdering swine that society would be apt to regard him as, were he to really exist, the movie LEANS on the viewing audience to regard him as the ‘hero’ (‘anti-hero’ is merely a euphemism to assuage your consciences).

At film’s end (again, in a wayward departure from the book), Lecter cuts off his OWN hand rather than Starling’s, to escape the “arm” of the law (couldn’t… resist). So we are shown that, though Hannibal is a calculating, psychopathic, pan-sexual, cannibalistic butcher, he still has a heart of gold when it comes to his unrequited lady love – well, ain’t that precious?

After all the hype surrounding the “long-awaited” sequel – who was waiting? I, and many other sensible people like me, were hoping that there wouldn’t be a sullying of the somberness of SILENCE with a stenchified sequel – the throaty-voiced hype, as always, far outweighed the quality of the belated, bloated product.

In a more concise interpretation of the above discourse: Eat me!