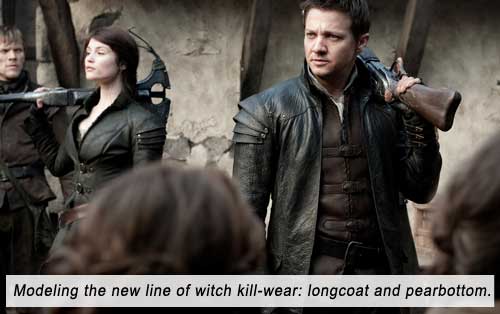 Once upon a time, there was an action man and his hottie sister, and they were called Hansel and Gretel. Abandoned in the forest at a young age, they stumbled upon a witch’s cottage, killed the witch who was trying to eat them, and grew up to be an Avenger and a Bond Girl.

Jeremy Renner (THE AVENGERS) and Gemma Arterton (QUANTUM OF SOLACE) are the eponymous heroes, not innocent babes as remembered by tradition, as Hansel’s first lines tell us: “One: never walk into a house made of candy, and two: If you’re gonna kill a witch, set her ass on fire,” with Gretel’s first words delivered while holding a gun to a man’s head, “Let the girl go, or I’m gonna blow your sheriff’s brains all over these fuckin’ hillbillies!”

HANSEL AND GRETEL: WITCH HUNTERS is a campy, cheesy, guilty pleasure, guns-and-sorcery actioner, self-aware to a fault of all the tropes it is satirizing and paying homage to. Excellent production values, an R-rating, and creative fight choreography only aid the rewritten storyline that The Brothers Grimm would have been proud to have documented and called their own.

In the grand tradition of ABRAHAM LINCOLN VAMPIRE HUNTER, this fast-paced movie plays loosely with traditional storyline (which was a German folk tale tabulated by the Grimms in 1812). Immune to witch spells, Hansel and Gretel become renowned witch bounty hunters throughout medieval Europe. Called upon to investigate a spate of kidnappings in a small town, they uncover a much darker purpose behind the child abductions: a witch’s coven on the “blood moon” (a lunar eclipse) that will render the witches invulnerable. We see milk bottles with drawings of missing children tied around them. It’s the little things…

The movie seems unbound by strictures: forget your expectations from a movie of this stripe – expect the unexpected. Do not become attached to the likeable B-characters – some of them are suddenly snatched from us gruesomely; do not expect the obvious romances to clack neatly into place – and remain happily ever after; do not expect sanitization for kiddie audiences – there is bloody gore and swearing and nudity and pearbottom leather. Maybe it’s the fact that the production boasts almost a complete European cast, and is written and directed by a European – someone from the arcane climes of where this diabolical tale supposedly took place – Norwegian Tommy Wirkola (DEAD SNOW, 2009), with a Euro sensibility that somehow outflanks the American MPAA. 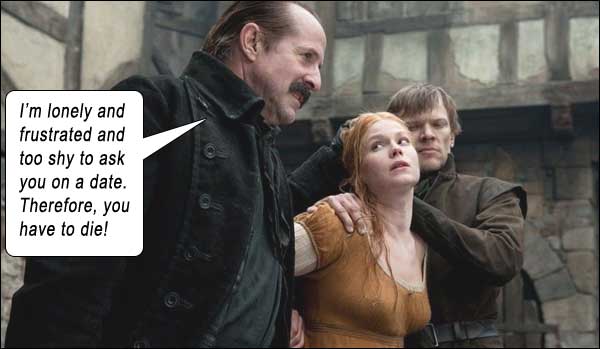 Peter Stormare is the irascible town sheriff Berringer; Famke Janssen, hissing like a raptor, is powerful head witch Muriel; Thomas Mann is Ben, a fussing fanboy of the legendary Hansel and Gretel – an anachronism to be sure, but a recognizable trope that adds another fun element that sets this movie apart; and Pihla Viitala is the accused witch that the siblings save from the sheriff’s pyre (they “prove” she is not a witch because her skin and teeth are flawless and their witch lore has taught them to look for decay in real witches); personally, I would have spared her for her flaming sunrise hair and the bottom as ripe as pear.

Set in a Germanic age when crossbows were the weapon of choice and firearms were just coming into their own, the siblings yet own some tasty custom weaponry, some of it stolen from VAN HELSING. (Although that Hugh Jackman vehicle is this movie’s closest cousin, HELSING couldn’t find that sweet spot between drama, comedy, cheese and special effects.) The witches fly on twigs, broomsticks, branches, anything that suffices for a stick between their legs (like all women, am I right?). Though I am against “magic” per se (because in movies it always seems to have no rules or limitations), writer-director Wirkola has given these witches powers that don’t seem too outlandish, and employs such kineticism in the magic-battle scenes that we do not question loopholes. Yet we still wonder why Muriel, in the climactic battle, does not use her unlimited magic and resorts to good old-fashioned Marquis of Queensbury fisticuffs against Hansel and Gretel. Those paying attention will counter that H&G are immune to witch spells. Correct, but Muriel has control of the environment around her, from making the ground rip open to teleportation. Yet she cannot escape a good left hook from Gretel.

Derek Mears and Robin Atkin Downes operate a towering man-mountain called Edward, a troll that “helps witches.” We wonder then, why he saves Gretel from the sheriff – in the most remarkably satisfying and gory way. We will find out soon enough, when Muriel relates the tale of Hansel and Gretel Unbound, and though it is not as gruesome as the original (abandonment, cannibalism, murder), it is just as illogical, and holds original and entertaining twists.

HANSEL AND GRETEL: WITCH HUNTERS steps away from the dull conventions of American filmmaking, but not too far that we do not recognize it. A nice European flavor for a dark European tale of attempted child murder. If only more stultified American filmmakers would follow these unbound conventions, we’d all live happily ever after. 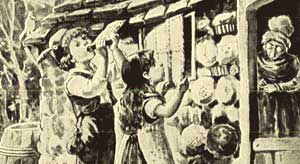