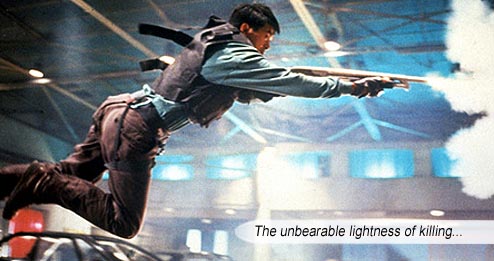 Chow Yun-Fat is Inspector “Tequila” Yuen. He’s a cop who’s been in hot water so long, he’s HARD BOILED. Or maybe it’s cos his face is egg-shaped.

Before he moved to America and became Ang Lee without the gravitas, John Woo directed HARD BOILED, the last of his Chinese gangster flicks and the pinnacle of what made John Woo John Woo; an homage to samurai, cops, westerns, and Pretty Orange Explosions. He also co-writes (with Barry Wong and Gordon Chan) and makes a cameo as a club-owner called Mr. Woo (ha!).

HARD BOILED’s first scene, the teahouse shootout, is like an explosion in a fireworks factory. Staging gun battles like this is Woo’s forte, and there are probably way too many gun battles like this in this film alone – bullets and blood and mayhem and Chinese stuntmen overacting. Tequila’s partner is killed in this fracas. So Tequila is also out for payback. His methods remind us of one Mr. Callahan from San Francisco.

A complex, touching story is interwoven with Tequila’s, that of young undercover cop Tony (Tony Leung Chiu Wai) in Silverman’s gang, who must betray his old boss to serve Silverman. Both decisions are wrong and his head would explode in ethical overload if it weren’t for being able to bitch to Tequila like a high maintenance girlfriend when they’re both trapped in a hospital basement full of – what else? – illegal guns.

The action scenes are staged with the frenetic creativity that has come to define Woo, and some of the standoffs are magnificent. We can see the samurai influences – except with guns instead of katanas – in the scene where the hardest of Silverman’s cop-killers, who is against the killing of innocent hospital patients, confronts Tony with hospital patients between them. Both the killer and Tony lower their weapons, eyes locked on each other while the patients scurry for cover. Then the gunfight continues.

But a note to Chinese stuntmen: it would look a lot more authentic if you would stop flailing around like salmon being electrocuted when you’re being shot. Just die. And remember how the stars of the movie dodge bullets: duck and roll in slow motion – even if you’re ducking and rolling in slow motion across the line of fire.

There is a stupid scene in the hospital where babies are being taken out of the nursery by hand when they could easily be wheeled out in their little cots; then another stupid scene where Tequila and his girlfriend (Teresa Mo) are putting cotton in all the babies’ ears to block the shootout noise.

The payoff for this idiotic scene is an iconic scene – Tequila with a babe in arms, shooting his way out of the hospital; emulated ten years later by Clive Owen in SHOOT ‘EM UP (2002).

Every time I chide John Woo, it pertains to his post-Chinese period, where he simultaneously glossied and sullied his style with overwrought Hollywood glambusters like BROKEN ARROW, FACE/OFF and MISSION IMPOSSIBLE II; merely copycatting American bombast rather than honing his own raw thunder. HARD BOILED’s insane body count and outlandish action may be an indication that Woo was chomping at the bit to BE Americanized all along.