A man picks up the wrong underage girl to molest. Oh, he gets screwed all right – but not in the way he planned…

No matter the vox populi, this seemingly thoughtless aphorism is genetic reality. In a biological ecosystem where ‘molecular information’ has encoded itself into organisms for the sole purpose of replicating itself (via genes), the aphorism describes nothing less than the reason for our very existence. If our ancestors (and all other life forms in the food chain that we depend on for existence) did not leap at the chance to breed at whatever age Nature denoted breeding ripeness, none of us would be here.

(To the idiots out there: I’m not advocating raping thirteen-year-olds. We live in a society of laws (created by mad, bad and dangerous people), so in the interests of passing on your genes, self-preservation against incarceration is the order of the day, ergo, tap only those whom the state says you can tap.)

In a world society where puny human “laws” (pertaining to alcohol, marijuana, abortion, prostitution, pedophilia, et al) vary in every single country and state, morphing with every sociological pendulum swing, the “illegal” and “unsavory” premise of HARD CANDY will one day be moot, but the actual tale of this attempted statutory rape misadventure will remain a compelling mind-bender.

30-something photographer Jeff (Patrick Wilson) flirts online with 14-year-old Hayley (Ellen Page), eventually meeting her in a public place and taking her back to his home. He seems like an unassuming fella who isn’t really after anything but friendship (which we know is patent horseshit), one of his “innocent” lines, “Well, I have to wait 4 years for you…” His walls are graced with frames of underage photographic models, which he insists he has never bedded, “It’s all professional.”

And Hayley has the “mature” act down, seemingly not even realizing she is flirting as she draws Jeff in with her ostensible innocence. Performances are uncomfortably good.

She makes screwdrivers for both of them on the pretense that she shouldn’t accept a drink made by a stranger. And Jeff passes out – SHE rufied HIM! He awakens tied to a chair. Suddenly her little girl act is no more, as she accuses him of being a pedophile and threatens retribution. And if there’s one thing I know from personal experience, you don’t wanna be tied to a chair while a woman with access to your kitchen knives is vehemently accusing you of being an asshole… 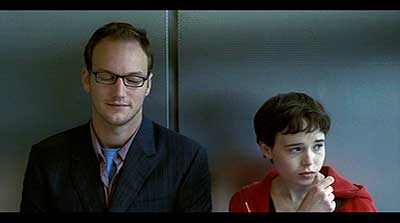 Just like PACIFIC HEIGHTS should only be seen by landlords (to avoid tenants getting crazy ideas), HARD CANDY should only be seen by rapists, not by potential victims. The dilemma: Is it still cricket if a potential rapist is tortured by their potential victim? Of course the politically correct answer is “Yes – kill the bastards!” but isn’t that advocating two wrongs making a right? Or worse still, if the “rapist” is only “suspected” (Jeff did say he had to “wait four years” and he hadn’t actually done anything sexual to Hayley) is it right for a person to take it upon themselves, on the strength of suspicion, to torture the suspected molester?

Note I have carefully avoided the term “child molester” because society has grown too complacent in muddying the distinction between “child molesters” and “statutory rapists.” It goes back to the “old enough to breed” aphorism: If they’re not old enough to bleed, you’re a child molester, but if they’re old enough to breed, you’re a rapist. And that’s not taking into account the millions of mitigating circumstances that might cancel out those definitions, like young sluts out to prove a point to their absent fathers, trailer trash mothers who set bad examples, or willing chicks who just need good grades.

Two actors, one location, HARD CANDY is a character-driven, classic suspense thriller that relies on kinetic writing (Brian Nelson) and heady direction (David Slade) that strangleholds our attention; I hate using splash-slogans like “edge-of-your-seat” but while I watched HARD CANDY, I suddenly realized where I was – on the edge of my seat!

In the best role of her career thus far, Ellen Page is a chilling devil doll. Her Hayley puts Jeff through horrors that no man should be subjected to, even suspected statutory rapists, because – much like the killers of abortion doctors who claim they are preserving life by taking life – mutilating or torturing somebody makes the torturer no better than the victim. That’s no way to curb aberrant behavior, and is often cause for recidivism. And creates another criminal in the process – the torturer.

So what IS the method of curbing aberrant behavior? Many answers, none of which you’ll find here or in the movie. While HARD CANDY makes no judgments about either player during its development, it resolves just short of brave by taking the side of the poor widdle girl. A European movie might have resolved more ambiguously; not so, gutless American pc culture.

Now you gotta stop looking at me askew. I’m not the pope who protects his flock of pedophile priests and pays off parents to keep their mouths shut; I’m not the congressman advocating against homosexual pedophilia caught hooking up on rentboy.com; I’m not the female school teacher who escaped prosecution because I was so blond. For a society that supposedly frowns on criminal lewdness, you sure let a lot of deviants get away with a lot of child-fucking. I guess deep down inside, you’re pretty certain that if they’re old enough to bleed, they’re old enough to breed…