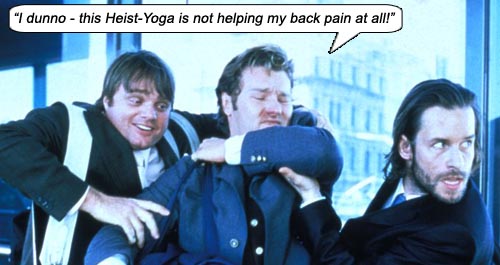 At long last, an Australian crime actioner with all the guts and grit of any British or American film of this genre.

THE HARD WORD is brutally raw and raunchy, pulsing with a truly Aussie spirit and a DownUnda cheekiness. There is much subtext of honor among thieves, mateship and family – nothing we haven’t seen before in American gangster movies – but with a CROCODILE DUNDEE accent.

In Sydney, the three Twentyman brothers, intellectual Dale (Guy Pearce, the brains of the group, and oilier than Aragorn in all three RINGS movies), amiable Mal (Damien Richardson) and volatile Shane (Joel Edgerton) are released from prison on the same day. What do they do as soon as they are free? Have lunch at Bondi Beach. Then rob an armored car – at the behest of their lawyer/heist manager, Frank (Robert Taylor). Then they fence the loot to two crooked cops.

We meet Carol (nasally scrumptious Rachel Griffiths) after the heist, Dale’s devilishly libertine woman, who has been making time with Frank while Dale was doing time. Dale “knows” this, but “doesn’t know” it. Whatever the case, he’s blissfully unthinking of it as he loudly slams her clams in a back room after the heist.

Double-cross: Frank and the crooked cops land the Twentyman brothers back in jail again – for that very heist.

But he needs the Twentyman brothers to pull it off.

Wondrously, he gets them out of jail again; more wondrously, they agree to do the job – on the proviso it is their last; and most wondrous of all, Guy Pearce remains oilier than a drip pan at a NASCAR convention.

The Twentymans’ code is: No Outside Help and No One Gets Hurt; of course, Frank brings in outside help, and everyone gets hurt. One of the outsiders, a dyslexic, impulsive thug named Tarzan (Dorian Nkono) goes ape, and the Twentymans, with bagsful of colorful Aussie cash, end up on the run from crooked Frank and the crookeder cops.

Written and directed by Scott Roberts, driven by David Thrussell‘s sassy soundtrack, story moves sharply from the botched Melbourne Cup heist, to an unexpected chemistry between Mal and a ditzy woman (Kate Atkinson) whose car the gang boosts, to a surprising, explosive confrontation between Dale, Carol and Frank after double-crosses galore. And the heart-tugging hook of THE HARD WORD is that all through their adventures, the bond between the Twentymans remains endearingly solid as brothers, businessmen and thieves.

Makes me proud to be Australian and a criminal. (Isn’t that the same thing?)

The Word.
The Hard Word is the pull; Aussie slang for going for the gold with a chick; “putting the hard word on her” – put out or get out, put up or shut up. In the context of this movie, Frank puts the Hard Word on the Twentyman brothers – he has them over a barrel with his crooked connections to the law, so forces them to pull the heists or he’ll keep them in jail.