Laffing it up lamely, while the world bleeds shamely…

In HAROLD AND KUMAR ESCAPE FROM GUANTANAMO BAY, Harold (John Cho) and Kumar (Kal Penn), are mistaken for “terrorists” on a plane to Amsterdam, and are thrown into Guantanamo Bay prison facility, without any trial, legal counsel or investigation. Just the way the criminal Bush Klan like it. Whereas the first of this series, HAROLD AND KUMAR GO TO WHITE CASTLE, was a frat-boy farce with a little brain behind it, GUANTANAMO BAY retains that same farcical nature, but deals with a topic that should not be laughed at in this moment in history. I guess I’m saying “too soon.” 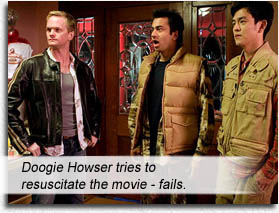 Plot relies on Amerikan jingoism and the actual terrorized mentality that imbues the average Amerikan redneck. The usually hilarious Rob Corddry interrogates Harold and Kumar, though in the context of this film, he comes off as criminally unfunny, due to reflecting the stupefying closemindedness and ignorance of the Bush administration. Another character actually accuses him, “It’s people like you who make the world think Americans are stupid.” And in glamorizing comedically a “person like this” HAROLD AND KUMAR do themselves a disservice.

Harold and Kumar promptly escape GITMO and go on the lam, trying to catch up to a subplot with Kumar’s ex-girlfriend (luscious Danneel Harris).

When they run into George W. Murderer Bush at his cabin (James Adomian, who seems to revel in the role, from THE LATE LATE SHOW WITH CRAIG FERGUSON to MIND OF MENCIA), I laughed even less than I had already been not laughing.

For this is no laughing matter. Even as HAROLD AND KUMAR ESCAPE FROM GUANTANAMO BAY satirizes that bastion of Amerikan hypocrisy and gutlessness, people are still being held there through the machinations of the previous Amerikan administration of lowlife maniacs who pretended they were “spreading democracy” through torture.

Even as an impersonator, W. makes me bilious. To laugh at Bush as an imbecile is one thing; to understand exactly what a DANGEROUS imbecile he was and is, should give us all pause. We should not be satirizing his foolishness and venal idiocy that has caused the ruination and loss of over 2 million lives. This is not ancient history – apart from those he killed on the basis of his WMD lie, the lives he has adversely affected are being lived out NOW, by people who would joyously see him dead, in a mental home, or tortured till his red mongoloid neck turned a whiter shade of jail.

There are admittedly a few high points amidst the morass of lowbrow: the bottomless pool party – read as “bottomless” girls, not bottomless drinks; and Neil Patrick Harris (the once and forever Doogie Howser) reprising his role as the drug-absorbent, brothel-mongering Neil Patrick Harris, who hallucinates unicorns and gets his kicks butt-branding whores.

I commended the last movie for showing how smart Kumar and Harold really were; in this movie, they are portrayed more like the losers that society believes stoners are. Ultimately, when Kumar scores his love, it is the American lowbrow trope of “underachiever-gets-the-girl.”

Okay, forget the crap movie. There is a fantastic irony surrounding this film and its star, unfolding in the real world even as I write: Guantanamo Bay in 2009 is slated for closure by the newly minted Obama administration. And Kal Penn, a likeable guy when he’s not acting the retard, puts his acting career on hold in 2009 – to join the Obama Administration, as associate director at the Office of Public Liaison!

He also had to kill off his doctor character on the TV show, HOUSE, to move to Washington and be a real life government official.

Kal Penn has found the perfect cure for his acting career: stop.