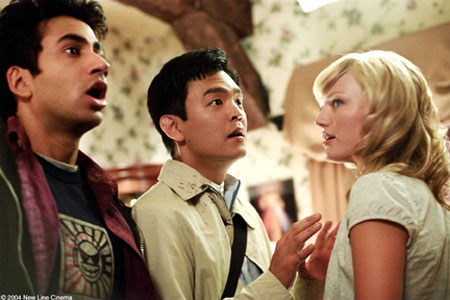 If those were D’s you’d be home by now…

HAROLD AND KUMAR GO TO WHITE CASTLE is the stoner film just waiting to exhale after Cheech and Chong retired their bong with STILL SMOKIN (1988).

Starring John Cho as Harold Lee (AMERICAN PIE 2) and Kal Penn as Kumar Patel (VAN WILDER), WHITE CASTLE is a road movie following two roommate slackers who crave White Castle sliders after a long day and a long toke. (Never heard of White Castle before this film; it’s a Midwestern burger chain, sometimes credited as the first fast food chain in the U.S.(!), and their tiny square burgers are nicknamed sliders, which is a term that can be used for any small burger.)

Writers Jon Hurwitz and Hayden Schlossberg and director Danny Leiner (DUDE, WHERE’S MY CAR?) are not simply shoving these guys into easily-identifiable tropes. They’ve even made them non-white, which reflects the real demographic of American youth (unless you ask anyone from the hooded South or Mitt Romney). Speaking of rednecks, each sidestep in Harold and Kumar’s quest is another hilarious dig at tropes: Christopher Meloni (Chris Keller in OZ) is a pustulating hillbilly tow-truck driver, who tows their car to his cabin in the woods and entreats them to “Go inside, make yourselves at home, get something to drink, fuck my wife, whatever you want…” Inside, Malin Ackerman awaits, tiny titties aglow…

Then there is the stiff satire against racism (long before the riots in Ferguson MI in 2014): Harold is thrown into a cell, where a black man (Gary Anthony Williams) tells Harold he’s in there “for being black.” Later, the cops pile on Williams for “trying to escape” while he sits peaceably in his cell, they beat him for “resisting arrest” while he’s spread-eagle against the wall, and accuse him of “having a deadly weapon” – his book (On Civil Disobedience). It’s extremely funny – and then we arrive in the present at Ferguson, where the all-white police force is shooting and killing African-Americans and given leave-with-pay as punishment by the all-white authorities – and it ain’t funny no more. Of course, that’s not HAROLD AND KUMAR’s fault – it’s actually amazing that they hit the racist nail so squarely on the head; it only proves this kind of covert racism has never truly been quashed, only less reported.

HAROLD AND KUMAR seems like one of those SNL skits expanded into a full length movie, but apparently, it’s fully original. It’s modern, hip, and the easy grace of its stars sells the rank absurdity of the script: riding a cheetah, hang-gliding to safety, the dream sequence showing Kumar’s relationship arc with an anthropomorphized bag of weed… and stoned-out-of-gourd Neil Patrick Harris as badboy-emeritus Neil Patrick Harris playing an ultra-outré version of extreme-Doogie Neil Patrick Harris.