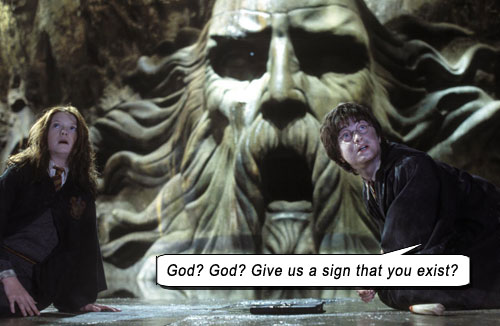 The sequel to HARRY POTTER AND THE SORCERER’S STONE, HARRY POTTER AND THE CHAMBER OF SECRETS, continues the richly-layered story of young wizard Harry Potter and his friends in their second year at Hogwarts, the school for enunciating British kids. A monster awaits in a chamber of secrets and only Harry can defeat it using numerous deus ex machinae.

At his step-parents’ home in London, we catch up with Harry (Daniel Radcliffe) meeting the bastard son of Gollum and Yoda EPISODE II – Dobby (voiced by Toby Jones), a self-flagellating, sado-masochist house elf, who warns him not to go back to Hogwarts. Harry is determined to find a way back though, and Dobby, for some reason, frames Harry with some mischief that, in any sane person’s house, would guarantee Harry would be kicked out of the house and back to boarding school. I’m missing the boat on the motivations of Harry’s step-parents; instead of getting rid of this boy they hate with a vengeance, they exile him to his room. Though how can mere bars on a window stop a magical person from escaping?

Ron Weasley (Rupert Grint) and his ginger bros break Harry out in a flying car– Stop right there – a thousand questions: Is the CAR flying? Or is it their WILL that is making the car fly? Why bother steering? It’s got no ailerons, stabilizers, rudders; does it run on gas?–

The overpopulated Weasley clan is introduced to Harry and they all teleport via green flame to Diegone Alley. Though instructed to speak clearly for the chant, Harry, who up to this point has spoken like an English professor on Branagh Juice, decides to pronounce it “dia-gon-ally” and gets transported diagonally into someone’s arsehole, we presume. No matter, for in this wretched place he meets Hermione (Emma Watson) – and the film at last becomes watchable.

What? Yes, I’ve noticed she’s grown, but I’m not looking there. Glorious. That aquiline nose, those waterfall locks… She repairs his glasses, “Oculis Repairos” (can you make me feel a little dirtier with those dumb spells, please?); you’d think he’d learn that spell himself, being a glasses-wearer. But maybe that’s his way of cultivating her little wizmuff.

The HARRY POTTER movies are well-made films (this sequel also directed by Chris Columbus), exquisite detail lavished on every scene, with excellent acting and production values. Yet I keep losing interest at regular intervals. Reason: magic. The Potterheads scream in my face, “But LORD OF THE RINGS (this series’ most obvious competition) has magic too!” Yes it does, but wields it in a more sensible manner. Every time the POTTER series uses arbitrary magic with no payoff or purpose, I roll my eyes and go, “Expecto Wankforus!” For example: Why are they changing animals into wine goblets? Is there any point to this at all? Any application in the real world? Any reason for it in the wizarding world? Is there any payoff? Harry breaks his arm and it’s immediately fixed by magic. That’s nice. Why write that it broke in the first place if the fix was so easy? And Dobby can make objects float, teleport, shoot fire out of his fingers – I mean, how does such a powerful creature become a slave in the first place?

When something is called “magical” it means it resembles magic (which is irrational, illogical and follows no laws of physics). It’s almost an insult. So you can’t call a HARRY POTTER film “magical” because it’s not like magic – it IS magic. It is irrational, illogical and follows no laws; the world of Harry Potter is unpredictable in the worst of ways. Any scientist will tell you that if the real world was as devoid of physics laws as this series of movies, everything on Earth would be dead or in a state of chronic chaos.

The main cast all return, with an addition: Kenneth Branagh is new professor Gilderoy Lockhart, comic relief for the sinister Snape (Alan Rickman), and the one shining light in this movie (besides Hermione). In a fantastically cheesy performance, he’s the Defense Against Dark Arts teacher, more involved with his own legend than teaching, five-time winner of the Most Charming Smile award.

We are also introduced to Jason Isaacs as Lucius Malfoy, Draco’s (Tom Felton) dad, as glamorously fey with that long white hair, creating a red herring as the bad guy, but he’s only a bad guy to Dobby, who finger-fries him later anyway. A pointless subplot.

The House of Slytherin (who are regarded as tacit “bad guys” in the school pecking order) built the chamber of secrets, to unleash a horrible monster and purge the school of all who were unworthy to study magic. It’s all very scary until we realize it makes no sense; that the chamber is somewhere under the girl’s bathroom, and that the monster is just a big snake that is easily defeated by Harry because of a magic hat, a magic sword, a magic phoenix and a screenwriter (Steve Kloves) who puts them all together because author J.K. Rowling ran out of ideas. 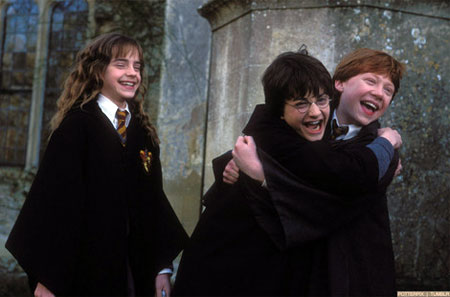 Look at these two idiots hugging EACH OTHER!

With Weasley’s worried face working overtime, he and Harry drink a potion to turn them into two other guys. It’s FACE/OFF for nerdists! The same potion turns Hermione into a cat! Don’t even ask– but are you trying to make me commit statutory master stroking? She says in horror, “Look at my face!” Weasley (in one of his few smiling moments – or should that be ‘leering’) replies, “Look at your tail!” Oooh, I am, I am. You’re already thinking about it, aren’t you, Ronnie?

As the filmmakers stole Dobby from LOTR, now they steal the spider sequence from the same Peter Jackson series. Hundreds of giant spiders surround Ron and Harry –cough, Shelob!– their magic flying car saves them in the nick of plagiarism. (So the car does have a will of its own – or were one of them mind-controlling it? And if it can think for itself as it rescues them, why bother steering and gearing?… Oh, it’s “flight gear” is jammed, so it can’t fly? A physical lever to control a metaphysical action? You lost me at Making It Up As You Go Along…)

And then – Boredom, thy name is Quidditch. One of the balls chases after Harry. It’s obviously “tampered with,” but does the game stop? No. Draco keeps bashing into Harry maliciously in full view of all spectators. But does the game stop? No. Rules like World Championship Wrestling. When Harry breaks his arm, in a school full of magic professors, they let the comic relief Gilderoy fix it.

Christian Coulson is Tom Riddle, who gives us a Bond exposition to pad the film’s climax, and to give Dumbledore’s phoenix time to fly down into the catacombs and drop off a hat to Harry, in which materializes a magic sword to– ah, forget it!… Then smartypants Riddle mouths off that his spirit is in the magic book lying right next to Harry. Geez, Harry, spirit in book, basilisk tooth in hand; how about stabbing the tooth into the book to stop it from yapping and telling everyone how to stop it?

Phoenix drips tears on Harry’s wound. He heals like Wolverine. Magic. Love it. Anything goes.

Hagrid (Robbie Coltrane) arrives back from Azkaban prison. We never even knew he left. As the school cheers him like the star of the show, we are left wondering whose bitch he was.