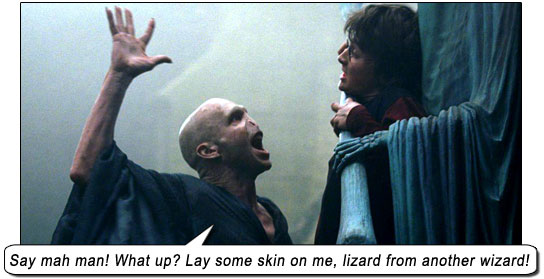 HARRY POTTER AND THE GOBLET OF FIRE continues the disjointed adventure of the world’s most famous boy wizard; not so much a feature film as a laundry list of tasks performed by two-dimensional characters, told with no logic, less motivation and lots and lots of not very special effects. It’s Magic! That’s great! Fuck you!

It surely seems like the most rushed movie in the series so far, as we meet Harry (Daniel Radcliffe), Hermione (Emma Watson, growing more legal with each film), Ron Weasley (Rupert Grint) and the Weasley family teleporting to the Quidditch World Cup via an old boot. No characterizations, no introductions, no logic – no surprise. Already I’m fuming over the pointlessness of an old boot in a field being a teleport device. As if hearing my inner monologue on the Riddikulusness of his world, Harry exclaims he “loves magic,” when they walk into their small tent and find it has an interior as capacious as the storyteller’s lack of imagination…

Did I mention the Quidditch World Cup? A game with no rules apparently has an annual meet! Some guys in Klan hoods called Death Eaters (which sounds ominous – until you think about it) attack the festival, and I wonder how anyone could tell it was an external attack and not simply one of the regular rule-less, lethal activities that takes place in every single Quidditch game ever played.

Off to Hogwarts, where two other schools of weirdoes (Beauxbatons and Durmstrang, arriving in a sunken ship and a Pegasus-drawn chariot respectively) visit for a Triwizard Tournament, a competition that can’t make up its mind on whether to be lethal or pointless, in the end choosing both, with a buttload of stupid thrown in. The competitors are chosen from a goblet of fire that spits out their names. No student under 17 can enter. Of course, that doesn’t matter in the least for 14-year-old Harry, whose name is ejaculated by the goblet, the reason given later as Making It Up As It Goes Along. All the adults in the room are cowed by this magical chalice because that’s how religions roll: even if it’s illogical, irrational or lethal to the youngsters, we’re still going to do it because the magical thing told us to. In a world where a man can talk through flaming coals, and where people follow a hologram bouncing ball to sing the school song, why is everyone so surprised that a floating goblet spat out a name that was never entered into it? It’s Magic – that’s great – fuck you.

Ron (who has pumped himself up to actually look sexier than Radcliffe in real life) has a bromantic tiff with Harry, which is so badly acted, I thought I was watching a HARRY POTTER film directed by Mike Newell. Regular screenwriter Steve Kloves (piggybacking off author J.K. Rowling’s childish storytelling) has given Harry a roving eye in this movie, as he makes eyes (and eyes only) at the plainest chicks on campus; while Hermione’s constant whining seems to indicate she’s met Aunt Flow for the first time. Nonetheless, when some Russian guy asks her out, one would think her faithfulness to her constant male pals up to this point would give her pause but no, she bends over quicker than a nun in heat.

(Interesting to note that in press junkets whenever Emma Watson is asked what it was like to kiss her two familiar male leads, she would pass it off “like kissing her brothers” usually followed by qualifications like “yuk”; while Radcliffe and Grint would describe the experience in more effusive terms, “Quite nice actually…” etc. Need I say: typical. The guys all want to do her, while she has relegated all of them to The Friend Zone.) 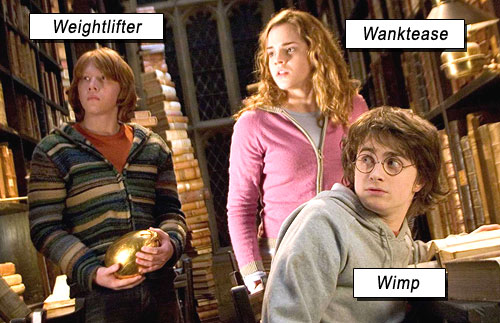 Brendan Gleeson arrives as the new Defense Against the Dark Arts teacher, Alastor “Mad Eye” Moody. This post has become the revolving door role for the HARRY POTTER series: I guess no one really has a good defense against the dark arts.

Hagrid (Robbie Coltrane) finds romance with a tall visitor to the school who looks like a transvestite.

Sirius Black (who used to be Gary Oldman in the last film, here, an irritating hologram of coals) sends a message via owl to Harry… these “magical” people using owls as messengers, almost as technological as the Pony Express. I could show you something really magical – it’s called e-mail.

Robert Pattinson is Cedric Diggory, also chosen by the goblet, older friend to Harry and not yet Team Edward.

First task is to grab a dragon’s egg. They’re schoolkids and they’re being pitted against an animal that can fry them to ash. Has any student received their parents’ written consent for this? It’s like a Quidditch game: no rules, no logic, and no point.

The school dance, and author J.K. Rowling shows us she hasn’t got the first clue on how to write teen romance. First of all, Harry is a dragon slayer – and he can’t get a date?! And as wingman, Ron should be woiking Harry’s spoils until the wheels fall off! Yet both of them mope around like eunuchs, lamenting chicks. All philandering aside, this is the sequence where everything should revolve around the male and female leads (specifically, Harry and Hermione) and their hidden emotions for one another; instead, Hermione acts like an incognizant whore waiting to be deflowered by Dolph Lundgren, while Ron shoots barbs at her like a jealous lover and Harry stoops nearby like a Just Friend.

And I eventually have to admit to myself: I don’t give an owl’s hoot what happens to Harry Potter! I really don’t care about this loser wanker’s fate any more. He is the titular hero of this series and with every passing film, he is emasculated to the point where we stop caring whether he actually owns a wand and whether he ever intends to use it. It is so obvious this tale is written by a girl because Harry is not spending every moment of every day thinking about the inside of Hermione’s thighs. Like the rest of male-kind. Keep on being a Just Friend, Harry. It’s not your fault; you’re just written that way.

Tween girls swoon over Harry’s puerile, pasty chest as he steps naked into a bath. A bath? Yeah, just trying to wash those last vestiges of penis off his body. A ghost girl visits and he modestly tries to cover himself, scared she’ll see his pierced vagina.

Next task: hold your breath for an hour under a lake and look for a mermaid’s McGuffin. Harry is terrified that he can’t hold his breath for an hour. That’s easy: use MAGIC, idiot! Everyone else will. Better still, use a freakin’ scuba suit! But why does he have to be “told” of gilliweed? I’m sure that if friend Neville didn’t mention it in passing, anyone else on campus might have told him a million different methods to breathe underwater. It’s magic that’s great fuck you.

And then the maze, an almost tense sequence where Team Edward and Team Potter must find something-something. Are they going to use their magic telepathic gifts? Is there a pulse beacon? No, they’re going to use the scientific method of Running Around Blindly trying to find it. Where’s the drama? Where’s the effort? Where’s Waldo? Then they’re teleported to a graveyard where Harry meets —

LORD VOLDEMORT! And all Ralph Fiennes Cheese breaks loose! Suddenly the tone changes to something eerie, mature, thrilling. Everything comes together in this graveyard scene and makes absolutely less sense that it was already not making, as Voldemort proves his power over Harry, who cringes like a girl baby. Taking elocution lessons from the Emperor in RETURN OF THE JEDI, Voldemort sneers, “I’m going to kill you, Harry Potter,” with the same insouciance as the Emperor’s, “And now young Skywalker, you will die.” Then he proceeds to do exactly what the Emperor did to young Skywalker – not kill him.

Harry escapes, and later tells Dumbledore, “Professor, at one point in the graveyard, Voldemort’s wand and mine touched!” That’s called docking, I think. Or just “touch-tips.”

GOBLET OF FIRE then ends on a sigh of defeat, as Hermione, Ron and Harry walk away talking about nothing; placing them together here at the end only highlighting the fact that they are farther apart than ever. And we hardly care.