Order off the Menu.

Nothing’s pulling the carriage, Harry. It’s pulling itself, like always…
— Hermione, ORDER OF THE PHOENIX.

HARRY POTTER AND THE ORDER OF THE PHOENIX reminds us of how Jor-El’s warnings to Krypton’s elders went unheeded, and how Krypton paid the price. In PHOENIX, the demon wizard Voldemort is back – but no one believes the people claiming this – Harry Potter and Dumbledore. Even using scientific evidence, Jor-El could not convince Krypton their planet was going to explode; how then do Harry and Dumbledore prove Voldemort’s return with only the amorphous, pointless, rule-less faculty of magic to aid them? I don’t blame the council of old farts for not believing. 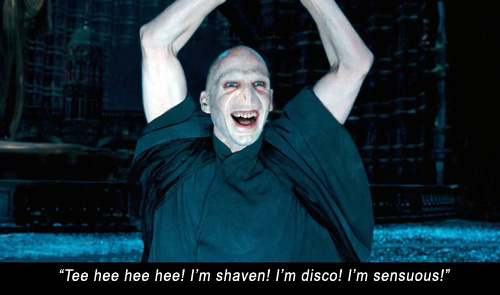 ORDER OF THE PHOENIX exhibits the same problems of disjointedness as its predecessors, not because it omits material from J.K. Rowling’s book of the same name – but because the filmmakers (new screenwriter Michael Goldenberg, and new director David Yates) do not structure their movie as a stand-alone tale. They rely too much on audiences having a priori knowledge of the Harry Potter universe, so the movie just barges along with no thought to setups, exposition, foreshadowing or payoffs.

The two major plot threads in PHOENIX are the return of Voldemort (Ralph Fiennes) to battle Harry Potter (Daniel Radcliffe), and a totalitarian witch (Imelda Staunton) ousting Dumbledore (Michael Gambon) as headmaster and taking over Hogwarts school. When these two plotlines are followed, the story chugs along swimmingly. As soon as movie deviates from these threads for the sake of inserting book material for diehards, it’s like Hermione says, “It’s pulling itself, like always”…

Movie opens very grimly indeed, as Harry and his bullying step-brother Dudley (Harry Melling, replete with goombah gold necklace) are attacked by Dementors. Harry uses magic to deter the beasts and is put on trial for using magic openly. These scenes are dark visually and metaphysically, not least because:

Sky turns from sunny to overcast in mere seconds to reflect the encounter;
A strange woman tells Harry she was sent by Dumbledore to watch over him;
The court of wizards ignores all sanity and reason;
Dumbledore ignores Harry in a disturbing manner, even whilst defending him in court;
Richard Griffiths (Harry’s stepdad) is now so morbidly obese in real life, he looks like he’s gonna die any second – and that’s truly disturbing.

The tone remains pretty dark like this, to the movie’s credit, but it just… meanders sometimes.

At Hogwarts, a new Defense Against the Dark Arts teacher is hired, Dolores Umbridge (Staunton), a Republican absolutist in a vomit pink dress who is institutionally insane. Forget the black-robed special effects, the most terrifying horror of all is the old white woman with the closed mind in the position of power.

With waves of her wand Umbridge battens down on the dress code, on students kissing in public, on the desired distance between them, on a hundred other codes that she posts outside her office. When she punishes Harry by making him write lines, each line he writes is simultaneously inscribed painfully on his hand!

When she tries to arrest Dumbledore to banish him to Azkaban prison, he claps his hands above his head and in a blast of dramatic phoenix-fire, disappears. Which raises the question: How do they apprehend ANYONE to take to Azkaban prison?

Students rebel against Umbridge’s totalitarian regime and gather in a secret room, electing Harry their new magic tutor. Harry (now a true teen, short-cropped hair, voice broken, balls dropped) seems to be the only person at Hogwarts to have achieved anything remotely cinematic – killing the Basilisk, defeating 100 Dementors, etc. – and we gain a perspective on his accomplishments; without him, this motley collection of witches and wizards would be called St. Crispin’s School for the Terminally Mundane. He teaches them that the hardest part of casting spells like “Expeliamus” and “Expecto Patronum” is admitting you’re gay. 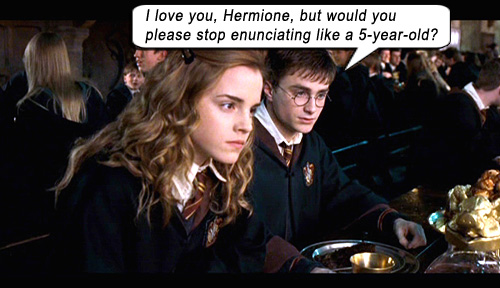 With his newfound masculinity, Harry stupidly makes a move on the Asian-American chick (Katie Leung); “stupidly” because Hermione is still in the wings, being ultra-hot, but mitigating that hotness with her lack of understanding on how to grow into her role as a young adult; I’m saying she’s a terrible actor. Harry’s and Katie’s lips actually touch, but the camera makes it a point to pan up their bodies to ensure Republican parents that their bodies do not.

Evanna Lynch is Luna, a bottle-blond creepy chick who sees dead horses. David Thewlis is back, as is Gary Oldman, both in a secret Order of the Phoenix (mentioned once then forgotten), amassing to do battle with Voldemort. Helena Bonham Carter is a bad witch; in and out of the story for no reason. Emma Thompson has a small cameo as the useless soothsayer. Brendan Gleeson brings his mad eye. And Jason Isaacs as Lucius Malfoy struts around with his hair set on Charlie’s Angel.

It’s lucky that all the stars and B-characters retained their looks and shapes as they aged. None of them turned into fat, ugly people or had limbs replaced or joined a cult and got face tattoos. What are the odds that such a large production could retain so much of its main onscreen cast like this?

Apparently, you can only see those emaciated horse specters “only if you’ve seen death” like Harry and the creepy chick. That’s why Hermione couldn’t see the specter pulling the carriage and thought the carriage was “pulling itself.” Later, all the kids – including Hermione – are fly-riding those horse specters to London. You lost me at Making It Up As You Go Along.

Climax sees massive posedowns between Voldemort and Gary Oldman, Voldemort and Dumbledore, Voldemort and Hansel (he’s so hot right now!) – in the best lightshow a computer can regurgitate, Volde cheesing it up and Dumble matching him pound for pound in Limburger and Swiss. In the end, everything peters out because – magic.