Harry Potter’s getting on to “that age.” At the opening of HARRY POTTER AND THE PRISONER OF AZKABAN, we meet him in bed under the blankets, playing with his wand.

And Hermione is – how shall I say this without sounding as perverse as the rest of you who deny you’re looking? – budding…

And Ron is still a mourning-faced creature.

But you know what this movie needs? More Gary please!

The great Gary Oldman almost stars in HARRY POTTER AND THE PRISONER OF AZKABAN as Sirius Black, a wizard escaped from Azkaban prison, on his way to kill wizard prince Harry Potter (Daniel Radcliffe). “Almost” because the whole movie is spent talking about him or seeing his face on a Wanted poster; and when we do meet him in the bedlam third act, his only meaty interaction with the other characters involves shouting action lines and being a werewolf half the time, so it’s a tragedy for us – and for the movie. We can see he’s been taking “oily” lessons from Guy Pearce, and he hasn’t bathed since he was Beethoven. 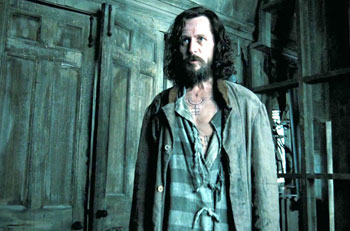 Still, the HARRY POTTER franchise lifts itself slightly with this third installment (following CHAMBER OF SECRETS), helmed by dark lord Alfonso Cuarón (Y TU MAMA TAMBIEN), instead of milky waif Chris Columbus. As the three child stars are older, the rating has moved from G to PG-13, so even as Sirius Black tracks Harry, we are afforded more sinister scares with the ominous specters called Dementors tracking Black.

Also, Lord Voldemort has re-entered the Potter tale, as a menacing presence in the background, whom Black is allegedly courting by killing Harry.

So the film is more mature than its predecessors, yet PRISONER OF AZKABAN retains a confused and contradictory forced tapestry of characters and motivations that I’m sure their demographic are too young to apprehend. Throw in a time-travel denouement and this confounded tale buckles under its own weight. As the emperor said in AMADEUS: Too many notes…

Film once again opens in the home that Harry shares with his unloving step-parents, where Harry is goaded into expanding his annoying aunt into a zeppelin that floats out the window. Thankfully, like the Hulk, her knickers stay on. Harry should apparently be penalized by the Wizard Assemblage Neon Knights of English Royal Society (W.A.N.K.E.R.S for short), but is spared the humiliation, and given special dispensation by the Accidental Magic Reversal Department (yeah, and that one I didn’t make up).

He runs away from home, and is picked up by a magic bus, which seems to be a part of the real traffic environment, yet can alter itself to circumvent the environment, as when it needs to squeeze through traffic. Again, no rules, ergo, no tension. How does inertia keep affecting it when Harry is thrown forward as it brakes hard? Why steer?

Harry is dropped off at an inn where he meets Ron (Rupert Grint) and Hermione (Emma Watson). Is author J.K. Rowling making this up as she goes along? Why are Ron and Hermione at this inn? It’s not like everyone ran away from home and needs a transitory shelter before heading back to Hogwarts. Halfway through the first act and you’ve already lost my emotional investment. Even with chest buds.

On the way to Hogwarts, a Dementor attacks the train. It’s looking for Sirius Black but it’ll kill anyone for being black and nearby. Kinda like cops: we’re looking for criminals, but we’ll use violent force on anybody during business hours.

At Hogwarts, there’s a new Dumbledore (Michael Gambon) because sadly, Richard Harris went to that great wizard party in the sky. Dumble warns the children that Dementors are patrolling the school grounds, on the lookout for Sirius. Does anybody else think Dumbledore exhibited unbounded irresponsibility in allowing Dementors on school grounds; beings that he admits are so incognizant they cannot or will not discern between Sirius and a passing school kid? Someone call Child Services on this senile goat!

David Thewlis commands the best role in this film. As new Professor Lupin of Dark Arts, he doesn’t seem stunt cast – like Branagh in the last film, or Emma Thompson in this film, as eccentric soothsayer Sybil – he seems born to be a wizard, like Alan Rickman (Snape) or Gambon. A well-rounded character that is a boon to Harry, ready with knowledge and a helping hand when needed. And a Patronum, whatever the hell that is.

We can safely say this movie is where all the Expecto Patronum started. Expecto Patronum! Jeez, can you make me feel any dirtier? Lupin also teaches the kids the Riddikulus charm; I’m biting not only my lip but my whole face: a spell that you use when confronted with a terrifying thing, to turn it into something comical. Oh my god, there’s not enough soap in my grocery store to wash off this dirtiness I’m feeling right now…

Hagrid (Robbie Coltrane) introduces his class to a winged eagle-horse called a hippogriff (which is an appropriate name, as hippo means horse in Latin, and griff means that big dumb galoot from BACK TO THE FUTURE II.)

Sybil teaches the kids how to read tea leaves and finds a “grim” in Harry’s cup, wolf-shaped leaves that presage his death. Royt… the fact that he lives through five more films is irrelevant – prophesy is always right, right?

During the Quidditch game, Dementors attack Harry, because again, so dumb they can’t tell a wizard’s elbow from his arsehole. Since Quidditch has no rules anyway, and anyone can do anything at any time for any reason, no one figured the Dementors shouldn’t have been on the field of play – not that they were on the field of play, because there is no defined field of play in Quidditch; and no one could tell they were sucking out Harry’s soul because every Tom, Dick and Draco tries to do that during every Quidditch game anyway. Only when Harry falls off his vaginal broom does Dumbledore stand and gesture, “Arresto momentum!” He didn’t really just say that, did he? By now, I’ve sunk so low in my seat out of embarrassment, it looks empty. Or should I say it looks Evacuo Chairo.

Harry’s broomstick breaks in the fall. Lupin: “I’m sorry to hear about your broomstick. Is there no chance of fixing it?” Harry says no [needle scratch]– Are you kidding me? You’ve just been thigh-humping this broomstick like a personal jetpack against all the laws of physics, Dumbledore just arrestoed your fall from 1000 feet; a supernatural wraith tried to suck out your life essence – and THERE’S NO WAY TO FIX YOUR VAGINA-HUGGING BROOMSTICK? Have you tried Elmer’s Glue and some frickin’ nails?

Harry uses his cloak of invisibility – but if it’s not to spy on Hermione, then I don’t really care.

The twist is that Sirius is not really trying to kill Harry but shout a few action lines and pick up a paycheck. Harry saves Sirius’s life saying Expecto Patronum so many times that *I* almost disappeared in embarrassment. Then a white stag appears and chases away the dark specters. Yay. For no reason. Even when we discover how the white stag appeared, it still has no reason to be a white stag. Unless, of course, there’s a deeper phallic meaning, or a cry for help from Harry over how Rowling is slowly making him too douchey for words…  I love reading all the apologists debating over why a white stag, why a Patronus, why a time loop, why no girls will touch them…

Over and above all the expecto boolshitus adventures, there’s Hermione’s time traveling/shark jumping. Woven into the story like an OCEAN’S TWELVE post-exposition, only the nerds care whether her chrono anomalies jigsaw into the body of the tale; everyone else is just happy to see Hermione in that jumper and those jeans –cough, chestbuds– 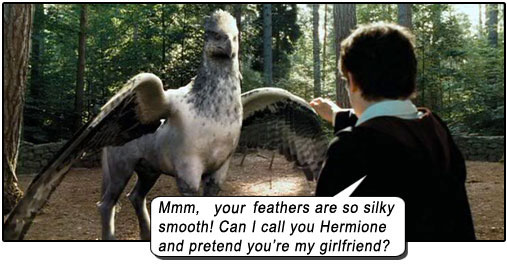 As we’ve already discovered, all these kids are at “that age”; gearing up to be swatted flat with hormonal discharges enough to knock over an elephant. Inevitably the question of “romance” will arise in this episode – in the most surprising, offhanded manner. I think everyone in the world took it for granted Hermione and Harry would be an item. How shocking then, during a traumatic moment, when Hermione instinctively embraces RON WEASLEY instead of Harry! Harry moves up behind Hermione like a third wheel and tries to… uh, uh, spoon her meaningfully, but the moment has been lost and it is forced and embarrassing. It is staged in this way on purpose; to set up Ron’s future relationship with this world’s greatest spinner. In one small move, Harry has been emasculated and excised from the emotional loop. You might think this intimate move is nothing consequential, but a move like this is always consequential. To paraphrase Vincent Vega in PULP FICTION, “We act like it don’t mean somethin’ – and that’s what’s so cool about it – but it always means somethin’!”

This ruins the franchise. Our hearts are just not in it anymore. By 2014, even Rowling would regret not bowing to convention and simply pairing the two leads; at the very least, she might have created sexual tension between them until they were of legal age. Now everything that comes after that hug looks obtuse and pointless. When Harry and Hermione ride that wild, frothing beast from BACK TO THE FUTURE and Harry makes a comment to Hermione, no matter what he says, he’s stuck in the Friend Zone now, never to return, so nothing he says can be taken seriously anymore.

Is this what Sybil actually meant when she predicted the death of Harry Potter in the tea leaves? Is this the hidden meaning behind Harry unable to fix his broom?

Coitus Patronum Interruptus, Harry! Even the Accidental Magic Reversal Department can’t save you from this one…

Dementor me this, Batman!

It astounds me that author J.K. Rowling and the filmmakers of her stories are given such credibility when she and they are obviously borrowing and stealing from myriad sources to flesh out their supernatural beings and magical concepts. The absolute worst case of this plagiarism is the Dementors. Are they seriously trying to pass off that design as original? The Grim Reaper visual (hooded skeleton/ specter, often armed with a scythe) has existed since before medieval times. You can pull up 1,000,000 iterations of this iconic image with one tap of a Google claw: Ring-wraiths, Monty Python’s MEANING OF LIFE, THE FRIGHTENERS, Ingmar Bergman, Blue Oyster Cult, THE SIMPSONS, THE GRIM ADVENTURES OF BILLY AND MANDY, BILL AND TED’S BOGUS JOURNEY, the cultural refs are literally endless…

Yet in her fevered plage, Rowling doesn’t even bother to make these raggedy beings or their interaction with the wizarding world plausible. Who are they employed by? What motivates them to go after Sirius Black? Eventually, blame would be laid at Voldemort’s feet for their quest, but then, why would Hogwarts hire/allow these beings to patrol the school grounds, knowing they are so volatile and dangerous, even without Voldemort’s patronage? Dumbledore merely warns the kids to stay away from them, knowing full well the Dementors actively seek and attack anything living to try to steal their souls. Hogwarts further allows a Quidditch game to be played while these loose cannon Dementors patrol the skies above it! Either the people in the story or the storyteller are stupid as hell. Which is it gonna be, Potterphiles?