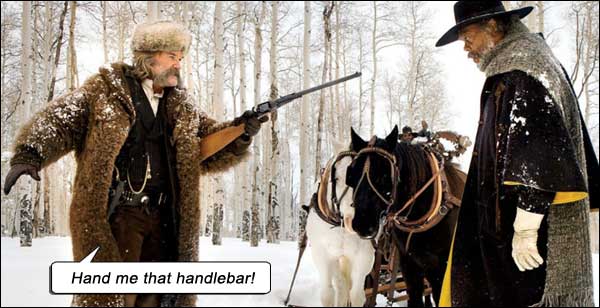 Eight is Enough to fill our hearts with dingus.

Wyoming. Post-Civil War. At a snowbound outpost, eight strangers must survive the stormy night. And each other.

Writer-director Quentin Tarantino‘s THE HATEFUL EIGHT is a slow burn; a firecracker waiting to be ignited in a nunnery. Unlike many of his films, we are not bled with anxiety in the first scenes. It can be said this is Tarantino’s first linear plotline. Or is it? 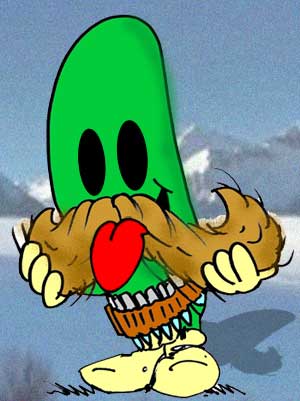 This eighth film by the master of mayhem is styled along the lines of the master of mystery, Agatha Christie’s AND THEN THERE WERE NONE (1945) and TEN LITTLE INDIANS (1965), and, due to the snow and Kurt Russell, holds more than a little resemblance to John Carpenter’s THE THING (1982). Or does it?

Isolated strangers, hidden agendas, mysterious deaths. The Tarantino fan – and the casual Western buff or thriller buff – must wait a good way into the film to discover it is one big ulterior motive waiting to happen. Or is it?– Okay, that’s enough of that. Just asking contrary questions doesn’t create tension, y’know… Or does it?

Opening scene finds bounty hunter John Ruth (Kurt Russell, sporting a mustache that is more mungabush than handlebar) as he dashes through the snow in a stagecoach, headed for the town of Red Rock, racing a storm, with his cuffed bounty, Daisy Domergue (Jennifer Jason Leigh in a primal, dangerous-funny role). Ruth aims to see her hang and collect his $10,000 reward. They are stopped by a stranger in the street sitting on a pile of dead bodies – Major Marquis Warren (Samuel L. Jackson), another bounty hunter who is begrudgingly allowed to share Ruth’s expensive coach. Soon they come upon yet another strandling in the snow, Chris Mannix (Walton Goggins), who claims to be the new Sheriff of Red Rock, in transit to his new post, without a badge or official paperwork yet. John Ruth trusts no one – not while he’s chained to a $10K bounty that others might kill for – yet he lets Mannix aboard on the indisputable logic that “If you want to collect your bounty in Red Rock, I’m the one that’s gotta pay you!” 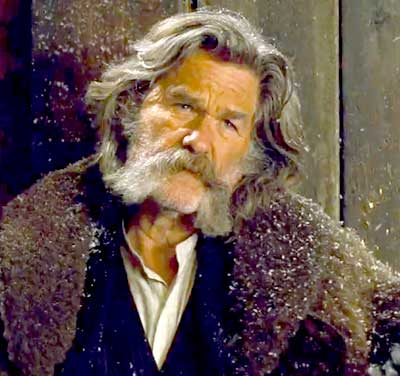 Sam Elliott’s mustache called Kurt’s mustache,
and told it to dial down to a 7.

Forced to stop at a way station called Minnie’s Haberdashery, to let the storm blow over, these four strangers encounter four more stranded strangers in transit: the hangman of Red Rock, Oswaldo Mobray (Tim Roth), a cowpuncher writing his autobiography (Michael Madsen), a Confederate General looking for his son (Bruce Dern), and Bob the caretaker (Demian Bishir), who says he is taking care of the place while Minnie is on vacation.

Even at this point, there is still none of that characteristic Tarantino tension. And the dialogue is not up to par with Tarantino’s usual repartee that keeps us glued to our seats through Nothing Happening (foot massage from PULP FICTION, Superman’s idea of humanity from KILL BILL VOL 2, et al). The strangers are somehow all linked in tenuous ways, and though John Ruth blusters his way around the tavern, eking out everyone’s motivation on the pretense of knowing who his mustache is spending the night with (while getting everyone’s backstory exposited for screenplay purposes), we find ourselves almost anxiety-ridden that there IS no anxiety.

THE HATEFUL EIGHT is told in Six Chapters (starting with Last Stage to Red Rock), and in Chapter Four (Domergue’s Got a Secret), something dark starts to rise like a shadow in a corner. As introduction to this Chapter, we hear Tarantino himself in voiceover – like a storyteller – detailing a plot point that only one character sees (even we the audience did not see it). It’s strange, it breaks filmmaking rules, but we are home! Coming out of nowhere as it does, it disorients us – yet we suddenly feel that Tarantino paranoia embrace us like a lost lover…

Tarantino has become such a force in movies for contravening convention so fearlessly. Only to create new conventions that others adopt in their filmmaking vernacular. Or he uses techniques that have fallen out of favor, like his penchant for cartoonish titles showing character names or information; techniques that have become such staples in hip movies nowadays that a younger viewer might easily mistake Tarantino for copying his own copycats. So though we titter for the voiceover’s obvious invasiveness, it gives the movie Tarantino’s unique stamp. They’ll be copying this raw invasiveness soon enough…

Suddenly – like piano wire tightening around our throats – everything gets slanted, everyone becomes a suspect, everywhere is a big black dingus. 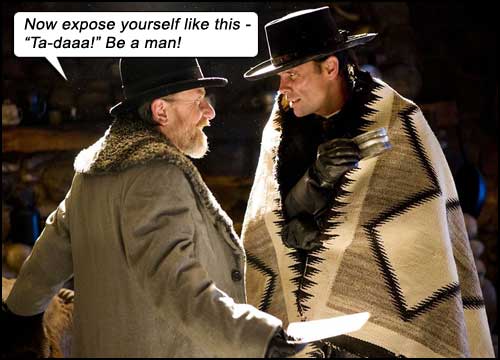 THE HATEFUL EIGHT is filled with all the tiny details that make a good film great. Firstly, it is shot “in glorious 70mm.” (Ultra Panavision widescreen filmstock that hardly exists in reality. Tarantino’s DP, Robert Richardson, tells us this is only the 11th feature made on Ultra Panavision.) It was Tarantino’s recurring descriptive in his script notes, and not so much a detail, as an overarching ethos. Tarantino wanted to isolate his cast and crew to ensconce them in 1800’s frontier survival mode. Even though only a few moments capture the breadth of the exterior snowbound vistas, we’re told the interior cabin shots are also out there. The indoors was in fact outdoors.

Details like hammering two boards on the front door to shut out the raging tempest. Why not just one board? Authenticity. The amount of time spent for characters to hammer two boards into the front door every time someone kicks it in to enter the cabin, is enough to get you drunk if you’re playing the drinking game.

Details like hat brims: Jackson’s character is in Bichir’s face, shouting at him. Their hat brims touch. But then Jackson moves into Bichir’s personal space – signified by their hat brims starting to overlap, as Jackson’s slides under Bichir’s and inches closer. Excellent.

Details like Jackson’s lascivious story describing what a freezing man did for a warm blanket, revolving around what he terms alternately his “big black pecker,” “big black johnson” and – wait for it! – his “warm black dingus.”

Details like the Lincoln Letter: A key element that opens doors for African-American bounty hunter Major Warren. Until Mannix smirks, “The nigger in the stable has a letter from Abraham Lincoln?!” the phrasing of which tells us why he must carry that letter.

Details like nigger: Yes, Tarantino’s characters have no compunction blurting his second favorite word. With Tim Roth putting British spin on it, “…my Nubian friend…” Activist groups get another chance to feel relevant as they twitter their faux-outrage…

And this is not a detail – but a coup: composer Ennio Morricone! Whereas Tarantino has used this giant’s soundtrack music in previous films, (KILL BILL, INGLOURIOUS BASTERDS, DJANGO UNCHAINED), at last he hires the man himself – 89-year-old master of Westernized Mexican music – Ennio Morricone! 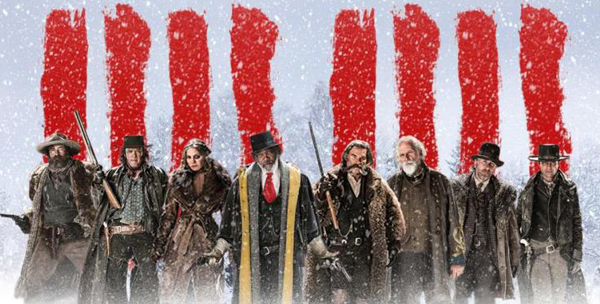 THE HATEFUL EIGHT is not structured to convention. You will find no character that arcs or finds redemption. None do, and no one does. Like the best bucking of convention, the galloping story subsumes the subtexts. By Chapter Five: The Four Passengers, the stagecoach is running off the rails. And we pray to a non-existent god that when it ramps over a cliff, we can keep our crotches safe.

Strangely enough, though Jackson, Madsen and Roth are Tarantino veterans, though Leigh ravages the screen with her savagery, though Dern is an old seadog, though Kurt’s mustache is ten times the badger it was in TOMBSTONE, this movie belongs to – Walton Goggins!

Walton Goggins, perennial creepy-guy character actor (Steve Buscemi-adjacent), a Junior Bruce Dern – here sharing scenes with ACTUAL Bruce Dern, and blossoming as we watch him! He’s been co-star on series like JUSTIFIED and SONS OF ANARCHY, but never red meat like this primo role. Though one of the B-characters, he grabs the reins like an A-Lister and steals the show. He’s at first goofy, then steadfast, and comes out damn righteous. Tarantino had to cast someone who could emerge from amongst the stellar ensemble to shoulder the denouement, and after Goggins’s small, unimpressive turn in Tarantino’s DJANGO, it’s pleasantly surprising that he was chosen to carry this beast to its intriguing conclusion.

THE HATEFUL EIGHT is intelligent, well-paced, gory and mungabush. Enough to fill our hearts with dread. Or a big black dingus.

Jackson on Russell:
“There’s essentially a real cowboy that lives inside Kurt.”

Classic summation, as we mentally assess all his roles, and find only truth. From Snake Plissken to BIG TROUBLE, from TANGO & CASH to CAPTAIN RON – they’re all cowboys, aren’t they? And leave us not forget the handlebar that his new handlebar bitchslaps – TOMBSTONE.