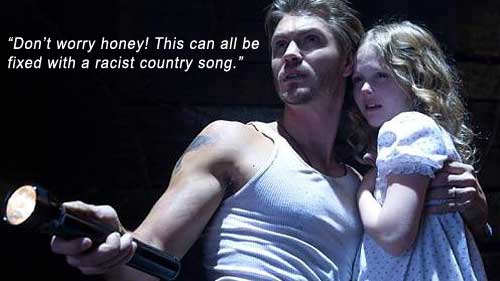 Five minutes into THE HAUNTING IN CONNECTICUT 2: GHOSTS OF GEORGIA, I was exhausted. Every ten seconds director Tom Elkins is blasting us with glitchy special effects. In lieu of horror. Tom thinks that the title card Based On a True Story is enough to scare the bejesus out of us. He’s right: I, for one, am terrified that people actually believe this gaboon.

Upon moving into an isolated house in the Georgia woods with her parents, young Heidi Wyrick (Emily Alyn Lind) sees visions of an old man named Mr. Gordy, and visions of slaves hanging around the property. A visiting black man explains that the Wyrick home used to be a “station” for the “underground railroad” – the movement that freed slaves – and that the white “station master” was brutally killed by hooded Klan for his efforts. But the ghost slaves are trying to tell Heidi something else: maybe that Tom Elkins should dial the effects down to PARANORMAL ACTIVITY.

Nice opening, as a raven-haired spanker with angular features and a ripe B-class chest sits on her bed (Abigail Spencer) wearing one of those long flannel shirts that makes us wonder whether she’s wearing panties. Glitched filmstock and fractured visions start immediately and continue every ten seconds for the duration of the film. So our heroine, Lisa Wyrick (Spencer), is already having visions and visitations, then moves to the Georgia house with her husband and daughter Heidi, where Heidi starts having visions – and Lisa doesn’t believe Heidi is telling the truth. Pot calling the kettle black much? Also, if Lisa and Heidi are constant victims to camera defocuses, stressed filmstock, tinted film, crash-cuts and jumpscares from the very start, where’s the drama? Where’s the arc? It’s not like they moved to a haunted house – the mother is shown as already haunted. For any “ghost story” to work, the protagonists have to experience something alien to their normal existence. All Lisa and Heidi did was move and continue to have visions/camera effects.

Daddy Wyrick is played by Chad Michael Murray, who looks like a country singer that exploits 9/11 with racist songs; constantly baseball-capped and beer-swilling, the perfect redneck. Redhead trailer-trash sister Joyce (Katee Sackhoff) comes to live with them and takes up residence in – whadaya know – the trailer out back! 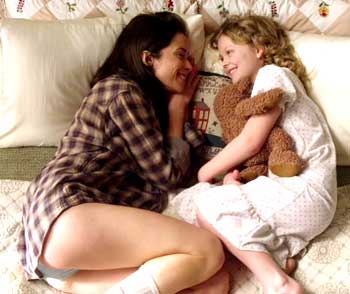 ”Tee hee! Guess where all the men are looking?”

No surprise this story is not true at all, and by that I mean, even from the account of that poor child born of beer sperm and country music. Real life Heidi reported seeing “Mr. Gordy” and some other apparitions, but nowhere are there accounts of the station master being a taxidermist who stuffed runaway slaves! And in the film’s finale, do ghosts really have to walk to their destinations, as the hooded station master does? Why doesn’t he just appear wherever he wants to be? And Joyce gets “stitched up” literally by the station master magically, needles coming out of her mouth. 120 years later, and Houdini’s needle trick still wows ’em. Dramatic license, or dramatic plagiarism?

Are they kidding us with the title? Like OPEN WATER 2, which had no relation to OPEN WATER except a venal cash-grab by executives, HAUNTING IN CONNECTICUT 2 blatantly tells us in its subtitle (GHOSTS OF GEORGIA) that it is not about the Connecticut family from the previous film, nor does it feature any “ghosts” from that film, nor does the haunting even take place in Connecticut!

Don’t you love how ghosts appear wearing clothes? Like the clothes have souls too, right? And after the slave ghosts “kill” their tormentor ghost at the end, we see them running, running to freedom lord sweet Jesus. Uh, why? If “ghosts” appear to re-enact their tragic deaths or to simply wander the halls of a mansion, why are these ghosts now “re-enacting” a new ectoplasmic scene? Will they now be seen “running to freedom” all the time by new owners; are they stuck in that new loop now? Where are they running anyway? To heaven? Where that tormentor ghost has obviously gone because they killed him quite maliciously, so lord sweet Jesus must have assumed him unto his bosom like most murder victims. (So do they kill him again in heaven when he tries to torment them, or do they leave that up to the wrathful god of Abraham now?)

After being wrung through every trope in the horror movie handbook (self-opening doors, figures appearing behind her with orchestra stabs, noises in the night, ramped filmstock; i.e. not one original idea), Lisa must “allow” the slave ghosts into her soul to combat the tormenting station master, who feels the need to roar like a monster when he approaches his victims. Like it’s not scary enough that he’s from another dimension wearing a sack hood and about to taxidermy you with sawdust and bugs, he’s gotta roar like Rosie O’Donnell as well.

Heidi wasn’t afraid of the ghosts – she was afraid because she was the child of a redneck who instilled in her a fear of a black planet. But maybe… just maybe, with all those black people singin’ and a-praisin’ lord sweet Jesus, maybe Mr. Gordy was actually Berry Gordy and the station was called Motown!