THE HAUNTING IN CONNECTICUT is advertised as “the most terrifying movie ever made.” It is. If you’re five. 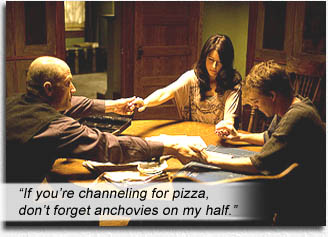 A family moves into a haunted house in Connecticut. Stupid things happen. The End.

Okay, okay, so you want some evidence…

Right outa the gate: “Based On True Events.” This phrase has become as meaningless as “whiter whites” or “bolder flavor.” We wonder where “based” ends and “true events” begins. But in the case of this movie – about a real house in Connecticut claimed haunted by the Snedeker family – we know it is untrue from the outset. This is not a war tale or a biography – this is about a “haunting”… and Victoria, there’s no such thing as ghosts.

For the sake of all the puling Christians who wish to believe in ghosts – even though it goes against their other supposedly Christian beliefs – let’s take it that disembodied souls DO exist. Now… it’s a good thing a belief in ghosts comes with the package deal of belief in ghost CLOTHING. Ain’t it considerate of spirits in all horror movies to wear the ghost apparel of the time period, and not embarrass anyone by appearing stark bollocks nekkid?

And still you want more?… but who are you to ask for evidence when you believe in “possession,” “haunting,” “angels,” “gods”? All without evidence.

Sara Campbell (Virginia Madsen) narrates the opening, with such an overused cliché, my head nearly exploded, “Why do bad things happen to good people?” Just as my blood pressure was leveling out, she hits us with, “Everyone knows the feeling of having a sick child. You feel like there’s something pulling on him from The Other Side…” Uh, your boy has cancer, woman. If the doctors who diagnosed him put bones through their noses and chanted over him due to cancer being supernatural, I’m sure you’d have them committed.

The Campbell family moves into the Connecticut house to be closer to the cancer treatment center (even though cancer is apparently supernatural and should be treated by a witch doctor), and discover the house used to be a funeral home where the residing undertaker, instead of embalming the bodies and letting them rest, would experiment with them in the basement, using his son the medium (Erik Berg) to conjure their ectoplasm.

All this backstory is seen in visions by Cancer Boy (Kyle Gallner) and then corroborated by his sexy cousin (Amanda Crew, whose only purpose is a montage exposition of the mortuary while looking like she’s just been taken roughly from behind). For people superstitious enough to believe cancer is “something pulling from The Other Side,” the family sure takes the news calmly. And keep living there.

Oh, and apparently, ectoplasm is flammable (no wonder, since it looks like the finest Oriental silks), burning everyone to death at one séance. And The Superstitious Rulebook sez that the psychic boy who vomited the flammable material should appear as “charred” in visions (until Happily Ever After is attained, whereupon he should appear unburned).

Reliable character actor, Elias Koteas (as a cancer-afflicted priest), explains the asinine theory of Cancer Boy’s visions: most people cross over quickly to the other side, but being on the border of Death, Cancer Boy can see “the other side.” Royyyt…. And how does that explain the rest of the healthy family’s visions?….

Sara finds old 19th century photos of past tenants (like Nicole Kidman does in THE OTHERS), chairs pile up (POLTERGEIST), doors slam and people float (THE EXORCIST), stray sounds, birds indoors, windows slam (AMITYVILLE HORROR), ghosts suddenly appear and are kind enough to bring their orchestra stabs (any horror movie you’d care to mention); the ectoplasm bit would be kinda original if GHOSTBUSTERS didn’t spew it first; modern filmic techniques like speeded-up film and missing frames, as we’ve seen in THE RING, THE GRUDGE, SILENT HILL; and of course – The Cliché’s Cliché – people walk into dark basements without turning on the lights.

Then things start to get really scary, as Martin Donovan tries to act. He’s Peter Campbell, the dad, whose backstory of drunkenness gives him license to one day be mean and vicious unconvincingly. It was the spirits’ fault… heh, get it? If you’re going to attribute a physical disease like cancer to the supernatural, why not go all the way? The spirits were pulling Peter “from the other side” – yeh, the other side of the BAR. Every little thump and creak and slamming door becomes a portent of evil. Oh my god! – did you hear the wind in the trees? – the dead trying to speak!…

Cancer Boy smashes the walls and dead bodies fall out – this, we are told, is what the spirits wanted. So their bodies could find rest. Uh, I guess being piled up in a wall is somehow more uncomfortable for a dead person than being buried in suffocating soil. And in Connecticut, apparently decomposed bodies don’t smell, so no one could’ve guessed the walls were packed with them for decades.

But if these spirits can manipulate doors and chairs, why not grab a pickax and get their own bodies out? Talk about lazy bones.

Sara prays to God to keep her son alive – then it all gets as confusing as christianity likes to keep it: She rails at God, “You can’t have my son!” In other words, she’s gone from compliantly being a servant of her deity, asking It to grant her wish, to shouting It down angrily. So the deity you pray to for every little car breakdown and stomach problem, whom you believe is keeping you safe every time you pray to It, whom you believe grants your “prayers” when things go right; you now deign to deny this same powerful deity Its wishes? How dare you? Anyway, your God created all these ghosts, right? God created cancer, right? Maybe your deity is just working in Its vaunted Mysterious Ways.

Father Elias pulls out a cross made of iron, extemporizing, “Iron defends from evil; it’s no accident prisons have iron bars.” Unless I remember that from bible studies, I’m pretty sure he’s freestylin’ now… “fire to unbind the spirits…” Yep, definitely freestylin.’

The finale is as big and fiery and Hollywood as possible, which I’m sure happened in real life in Connecticut, after which, we are informed, “Matt Campbell’s cancer disappeared and he made a full recovery.” I’m sure it had nothing to do with his treatment, or the fact that many cancers go into remission for no apparent reason.

Also: “the house was rebuilt and resold. No other occupants have complained of any disturbing manifestations.” Of course they haven’t! Nothing was there in the first place.

But I think the filmmakers are missing the bigger picture: The Snedekers found the cure for cancer – exorcism!