Once Upon a Scary Spinster… 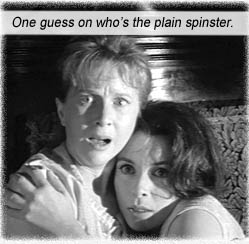 If you can get past the theatrical acting and the melodrama and the distracting voiceover, THE HAUNTING is a reasonably good horror movie. Scary? In places. Silly? In more places.

Still, this may be one of the first True Horror movies, utilizing the audience’s imagination to create its scares. From the novel by Shirley Jackson (The Haunting Of Hill House, 1959) and a screenplay by Nelson Gidding, director Robert Wise (THE DAY THE EARTH STOOD STILL 1951) uses skewed camera angles, eerie noises, chilling unseen presences to create the life force of the haunted Hill House – a veritable castle where four people will spend a few nights in an experiment to discover supernatural phenomena.

Smug Dr. Markway (Richard Johnson, wishing he was Clark Gable) invites the other three: Eleanor (Julie Harris), a plain spinster living in her married sister’s lounge room, aching for adventure; Theo (Claire Bloom), ambiguously lesbian and disarmingly hot, even for black and white standards; and Luke (Russ Tamblyn, looking like he has just breezed by from a Frankie Avalon beach movie).

The scares in THE HAUNTING are admittedly effective – if you don’t think about the logic behind them. For example, Eleanor and Theo cower together in a bed, listening to gargantuan banging noises, which echo through the house, sounds of feet running around, wailing noises, watching the locked bedroom door in anxiety. Do they believe something is trying to get in? (At least, that’s the notion they whimper to Clark Gable as he smugly dismisses them as Scared Dames because he didn’t hear any sounds.) But why would something supernatural “bang” on the door if it wanted to get in? What’s the point in being supernatural if you can’t squeeze your bad spirit self through a locked door?

Other genuinely chilling sequences involve Eleanor lying in the dark, hearing voices, laughing, babies crying – oh no! Not babies crying! – and thinking she is holding fast the hand of Theo. When the lights come on, Theo is far across the room – whose hand was she holding?

The script creates much of the anxiety: “Everything seems to move when you turn your head away”; “There’s not a straight angle in Hill House”; ominous statues in the courtyard, a rickety spiral staircase where people hanged themselves; showing nothing, implying everything – but the script is also responsible for acres of backstory and montage that will either scare you to death or put you into a coma.

The hook in THE HAUNTING (Never Show The Monsters – but Make Lotsa Banging Noises) would inform modern films like THE CHANGELING (1980, starring George C. Scott) and PARANORMAL ACTIVITY, 2009.

Watching people in black and white movies flirt is always good for a laugh; back in the day when being a 40-year-old spinster was scarier than any ghost. Dr. Markway’s manly advances toward plain Eleanor involve telling her that her hair is lovely. Until his wife turns up unexpectedly.

Then there is the black and white version of raunchy lesbian sex, as Theo and Eleanor get drunk in the same bed wearing long thick woolen nighties, wocka-chicka just moments away. Fat chance! It’d take a jackhammer to cleave those nighties.

Markway is “looking for proof of supernatural phenomena” – well, things keep happening and Markway never comes close to writing anything down! No research, no documenting, no experimentation. When he finds the freezing “heart of Hill House,” they all stand there talking about it, doing nothing to verify it. And he “guarantees it won’t register on any thermometer!” That guarantee would hold more weight, Doc, if you actually tried to measure it with a thermometer!

These are exactly the types of dills that are affected by curious phenomena – people prone to be terrified because they’re not in the least trying to discover what is behind the phenomena. (By the way, that pathetic TV show GHOST HUNTERS is not “scientific” just because they use night vision cameras to show those fairyboy “ghost hunters” peeing themselves over every little noise.)

When the other three try to oust Eleanor from the house because of her escalating battiness, she refuses, maintaining she is happy to remain in the house forever; that she feels a kinship with it. I guess cowering in the darkness and feeling as if you’re being watched is what a 40-year-old spinster calls fun. It is hinted at by the others that the house phenomena may merely be a product of Eleanor’s spinster imagination; that her fluids are out of control for being 40 and not having a man. I hesitate to guess. I didn’t take any notes.

You get that lazy when Dr. Markway is your MD. I went to him with a high temperature the other day and he felt my forehead, didn’t look at the thermometer, and diagnosed, “You either have a fever – or you’re possessed by demons. By the way, your hair is lovely…”