Well, we’ve got to give it points for excess epicness. It can’t be easy to scare up a cast of thousands and get them all to walk in one direction at the same time. We’re talking planning maximus. Unfortunately, HELEN OF TROY comes off as all planning, no maximus. 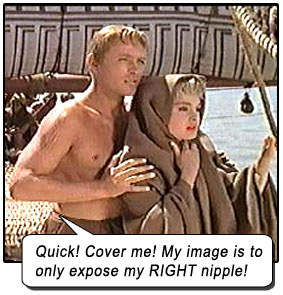 The nation states of Greece send a thousand ships to attack Troy, in support of Menelaus’s grand insult, which seems a bit excessive, but only because the movie fails to capture the largesse of these mythical characters (which include Achilles, King Agamemnon, Ulysses, Hector of Troy, et al). If these Greek heroes did exist in ancient times, they must have been homo superior to have warranted such outlandish displays of love and war; carved from bronze and sex-musk and stardust. Instead, no maximus. (In this respect, Wolfgang Petersen’s 2004 TROY succeeds at giving us larger-than-life icons.) Forcing melodramatic dialogue out of their mouths in an effort to transcend two-dimensionality, HELEN’s characters exist as mere plot points.

Director Robert Wise (THE DAY THE EARTH STOOD STILL, 1951), brings Homer’s The Iliad to life (?) in this gigantic production that seems overly eager to impress with its full-scale practical props: wooden war machines and battering rams and assault towers. And a cast of thousands all walking in the same direction at the same time. (Wise might have thought he had Cecil B. DeMille beat on epics, but THE TEN COMMANDMENTS was on its way, in October of this year, 1956.)

Meanwhile, overarching all the schoolyard-swordfight battle, there is supposedly the fable of a love affair between Paris and Helen, so heated in urgent lust that it would topple empires… uh, yeah, if their plastic pretend fornication could rise above the level of hotness exhibited by the common tree-sloth. Most of the time bland blond Helen is trying not to be out-prettied by effete Paris.

Everyone speaks in High British to, uh, sound Greek. Soundtrack by Max Steiner bashes us over the head, then kicks us in the kidneys. Achilles gets shot in his Achilles tendon (what are the odds?!) and Paris is stabbed in the back by Menelaus (because if Menelaus attacked from the front, he’d only be tempted to bite Paris’s exposed right nipple in urgent lust).

And the Trojan Horse? Just like every condom, it’s used to sneak in without anyone knowing…