He did the time for a bank robbery he didn’t commit. Now that he’s out, he’s really gonna rob that bank. Nice Concept. Might look implausible if the actors don’t tread delicately with utmost conviction. Or unless you can find an actor that stands outside the field of acting altogether and can retain a blank poker face through it all. Enter Keanu Reeves. 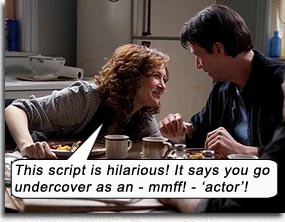 He’s Henry, a shiftless toll booth operator in Buffalo, suckered into being accessory to a bank robbery and imprisoned, whereupon his cellmates (led by James Caan as Max) urge him to exact recompense for the injustice of his incarceration: when he gets out, commit a real crime to make up for the time he already did unjustly.

Though a comedy caper movie, HENRY’S CRIME is not flashy or frenetic; it’s indie all the way (written by David White, Stephen Hamel and Sacha Gervasi – who may be the love-child of Sacha Baron Cohen and Ricky Gervais). With lean, expedient direction by Malcolm Venville, initially funded by Keanu himself, the movie plods along bemusedly and interestingly, much like its lead character, who takes everything with equanimity. He is, after all, The One.

Henry never bats an eyelid when he is arrested; or when his girlfriend (insipid Judy Greer) visits him in jail to tell him she has fallen in love; even when he is victim of a violent Meet Cute, as he is run down in the street by aspiring theater actress Julie (the stunning Vera Farmiga, in an uncharacteristically shrikey role). Nothing seems to reach this guy’s nerve endings. Usually I would laugh and/or complain about the lack of acting from Keanu, but in this context, his demeanor fits perfectly. One would have to be quite inured to emotion existing each day in the suburban rut we find him in, and then to endure jail time. Yet his determination (or whatever you’d call that somnambulistic pseudo-ambition) to lash out and grab life by the baby-makers, to rob the very bank he was convicted of robbing indicates some kind of moral outrage at the least.

Didn’t Morpheus tell us The One would bring balance?

Henry needs Max to help him pull the heist, so he convinces Max to take his parole. Up ’til now, Max – a lifer who loves prison for its regularity – has dialed the Crazy up to 8 every time he sat in front of the parole board. He’d rather be called a “confidence man” than “con-man” (too pedestrian); perpetrating a crime is not even about the money, but the thrill of the chase, and getting caught for that crime will only land him back in jail – which he loves – so it’s all win-win for him.

Henry and Julie must necessarily bonk, she must necessarily figure in the plot (by rehearsing in a theater right next door to the bank – a theater which once had a tunnel connecting it to the bank vault – oh, heavens to plot convenience!), Max necessarily provides comic sidekick relief, and Henry must necessarily become an unwitting hero during the heist… What isn’t so necessary is Peter Stormare going above and beyond as eccentric Euro director of the play, Darek Millodragovic, whose overacting and over-accent is so hilarious, Keanu almost snapped out of his jet lag.

It’s a fine line this movie treads in making Henry an anti-hero (read as criminal) and allowing him to commit a crime that is not morally reprehensible, so he doesn’t lose the audience. In that sense, Keanu’s underplaying-to-the-point-of-chloroform performance is exemplary, selling us a character who bemusedly decides that his only post-prison option is to actually do what the confidence man suggested.

Amusing resolution, though gutless, as Henry has to somehow pay for his crime, no matter how innocuous it was, and no matter that he was already convicted mistakenly. Damn you MPAA, and your obnoxious, hypocritical meddling in otherwise interesting movies! If the MPAA had any sense – which they don’t – they would make the people who incarcerated Henry incorrectly pay for that injustice. But that’s too complicated for a society weaned on seeing “crime” as low-level, easily-defeated, punch-em-up tropes. The jejune surrender to good screenwriting by making Henry get busted again – simply for trying to even the score against The Man – THAT… is the movie’s real crime.