Before Schwarzenegger, before Ferrigno, before Stallone, Van Damme, The Rock and Wolverine, there was the first movie muscleman. Mr. America (1947), Mr. World (1948), and Mr. Universe (1948, 1950), mighty Steve Reeves stars as the original and best HERCULES.

HERCULES, an Italian production directed and co-written by Pietro Francisci, combines The Labors of Hercules with The Voyage of the Argo, and plants Reeves’ sleek muscle mass squarely at its center. Jet-black hair, crisp beard, a skirt so tiny it was almost mythological, biceps that could stop a tank, and lats that could possibly be the Hoover Dam in human form, Reeves is the visual embodiment of the demi-god of Greek and Roman mythology, the immortal son of Jupiter.

While traveling to Iolchus (seemingly pronounced “Jolco” by the English-dubbed cast), in answer to a summons from King Pelias, Hercules saves a scantily-clad damsel (Sylva Koscina) who happens to be the King’s daughter, Iole (pronounced “Yo-lay”). While Herc changes her chariot wheel, Iole tells of the theft of her father’s Golden Fleece years ago, while she rubs more strawberry body oil into his delts… 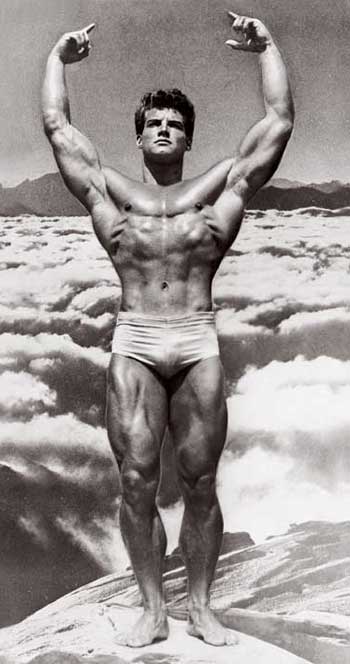 Meanwhile, King Pelias is fearful of his future, as his sybil foretells the coming of a man with only one sandal who will be the true king of Iolchus. Hercules arrives with Iole, wearing two sandals and not much else. Pelias tells Herc he is to be mentor/trainer to his impetuous son, Iphitus (Mimmo Palmara, whose name sounds like “a fetus”; we can’t tell whether he is doughy or just wearing his skort too high).

As with all foreign films dubbed into English, there is much lost in translation – not just the vernacular, but cultural idiosyncrasies. And when English translations of the same film are so varied, one word misplaced creates a very different film. The first time I noticed this was during various subtitled versions of SEVEN SAMURAI. The earliest subtitling was, of course, the best, and conveyed that somber parable in the most respectful manner; a more modern pass gave the movie a breezier tone; and if you want to totally disrespect a foreign film, go for the English dub.

In HERCULES, when Iphitus meets Herc, one English dub has him sneer, “They say you’re a god. Why aren’t you invisible?” which makes no sense (MST3K uses this version), whereas a more mature dub translates, “They say you’re a demi-god. Can you make yourself invisible?” Both represent Iphitus’ snide poke at meeting the better man, but only the second version gets the point across that Iphitus would like Hercules “to disappear.” Thus, whole films are either dubbed in Low Child or Cognizant Adult. Pray to the gods you hear the latter.

When Hercules is at Pelias’ palace, he is portrayed as a tactician, an intelligent warrior, and of course, a Posedown Queen. Onboard the Argo later, he is canny enough to discern who started the dissension among the men – the man sent onboard as the king’s spy. He barks orders that supersede even Jason (Fabrizio Mioni), the captain of the Argo. Movie goes to great lengths to show us Herc is not “all brawn, no brain.”

When Hercules goes after a runaway lion (no mention of the Nemean Lion from his Labors), Iphitus follows – to try to get Herc killed by the lion, and if not, to kill Herc after Herc kills the lion. Iphitus shouts all this at the top of his English dub, but then dies at the lion’s paws himself, before Herc has to strangle the poor creature. King Pelias blames Hercules for not saving Iphitus, “If you didn’t seek glory in going after the lion, my son would still be alive!”– Now hold on a minute! Iphitus the Idiot followed of his own volition, and with deadly intent. But there’s no talking to grief-stricken kings, even in that sexy skirt. As absolution, Pelias orders Herc to “go fight the Cretan Bull,” which is basically an American Bison, that Herc takes down soporifically.

The subplot of Iole’s aching loins is always simmering below the surface, and no sooner does Herc return to Iolchus with his skirt at a 90-degree angle for Iole, than he is conscripted onto the Argo to seek out the Golden Fleece with Jason. Pelias noticed Jason had entered the palace with only one sandal so wanted to subvert the prophecy by sending him on a quest we would think should have been undertaken decades ago.

Thus follows an overlong interlude on the Island of Amazons, a race of women with warrior hearts and thigh-high miniskirts. Though they supposedly use and kill any men that come their way, yet the misogynistic era (1950s) paints them as giggly girls who enjoy being chased playfully and feeding grapes to men, ready to fall over their breastplates at the first sign of a cock who’ll take charge; all flirty eyes and seductive gestures, and, of course, a gratuitous dance of diaphanous gowns. However, the manliest man of the man-men, The Herc, is not taken in by their charms (like Jason, who falls for the Amazon Queen), and once again takes charge, bodily dragging the men off the island coitus interruptus and banging the rowing drum to spur them out to sea.

On the island of Colchis, the Golden Fleece is guarded by a misshapen tyrannosaur-thing – oh, it’s meant to be a dragon! Rubber suit alert! Guess no one had Harryhausen’s number.

Of course, all Hercules movies aim toward that climactic scene where our god-hero brings down a temple by pushing/pulling on two giant pillars. HERCULES doesn’t disappoint. Was this the first pulldown of its kind? Setting the bar! His wrists chained, Herc swings each chain around two mighty Doric columns, then flexes his Hoover Dam – Lats! Biceps! Pecs! Delts! We so close to fainting from Reeves-skirt being deliriously high on quadriceps! And when the temple comes crashing down in orgasmic fury on the soldiery, Herc wins the day! And our hearts… 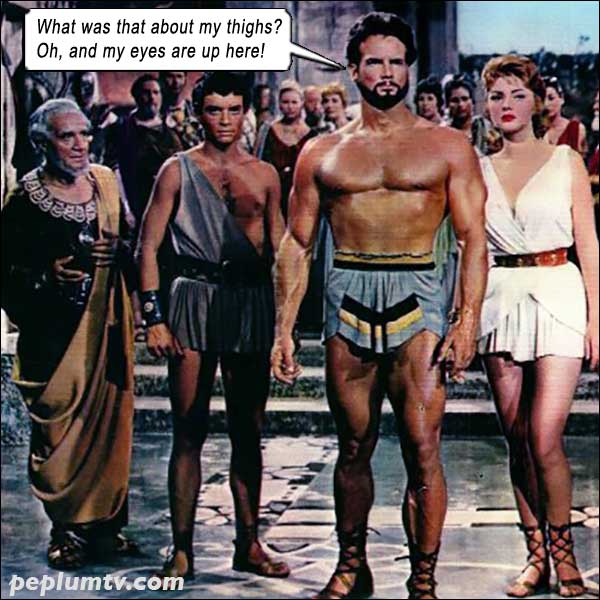 Steve Reeves did not even speak Italian, yet became the highest paid actor in Europe after his stints as Hercules and other cinematic strongmen. (I wonder how they achieved his seemingly authentic interactions and pretend dialogue.)

It could be argued that the “Peplum” movement (aka “sword and sandal” films), that started with HERCULES, was responsible for the rash of cheap Italian films (snidely termed “spaghetti”) that led to Sergio Leone’s blast furnace Spaghetti Western trilogy, that created Clint Eastwood’s cowboy career!