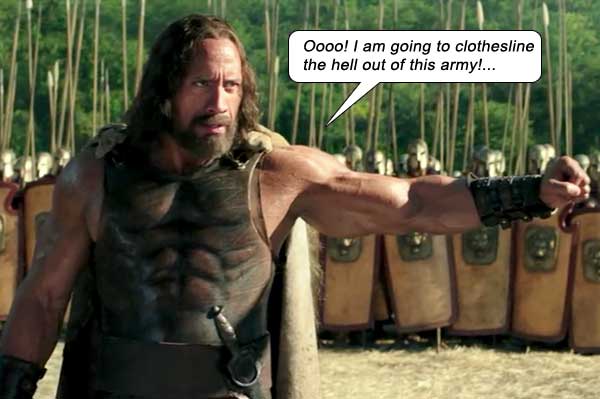 Well, at least he looks the part!

HERCULES is an interesting take on the old mythology, as Moore deconstructs the demigod and his outrageous legends, making Hercules’s godliness the product of tall tales rather than being Zeus’s son from an Earthly mother; and making his Twelve Labors the combined efforts of unseen and unsung companions. Movie stays true to this concept, as we catch up with Herc the Merc after his vaunted Labors, a cynical, tormented soul, selling his massive sword, powerful muscles and passable acting to the highest bidders. He and his battle-bred companions encourage his myth, and it scares their enemies and lends them bargaining power.

I have not read the Moore comic, but he was vehemently dissatisfied with the moviemakers, and there was blood spilled over contractual details, so I’m guessing the movie, as a mildly enjoyable action epic, does not live up to its unholy potential. And what’s with all the names? Everyone keeps saying other people’s names too much and too pointedly, and not one of these Greek names rolls comfortably off anyone’s tongue. It’s like listening to a marble gargling competition. Who cares what their character names are anyway? Are we trying to be authentic to the comic, or to mythology? Because those English and American accents are really transporting me back to Greece before the first Olympics.

We see Hercules complete his monumental Labors in quickie opening scenes; that excellent trailer showing him running toward the boar, or the massive lion leaping at him – all over in three eyeblinks. Don’t wait for any more album cover shots like those. The rest is sword and archery battle against Greek soldier pixels. 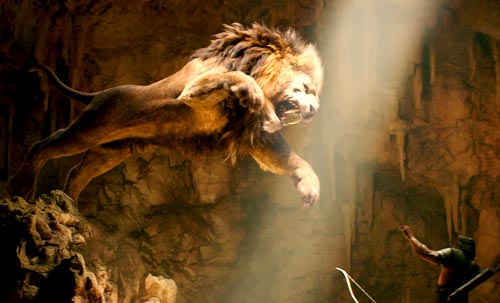 Reece Ritchie is Hercules’s young nephew, silver-tongued Boolshittus Maximus, responsible for the spreading of the legends; Ian McShane is Herc’s soothsayer, Tellus Anuthawon, always predicting his own death at the hands of green screen; Rufus Sewell is Right Handmanus, deliverer of plot points; Aksel Hennie is a mute (like Professor X or Wolverine – or is that mut-ANT?) and Norwegian actress Ingrid Bolso Berdal (the new Nicole Kidman), is Hotlanta the archer, with abs so ripped I spent my time gazing deliriously at them, praying to Zeus her skort would fly up and reveal her shaved isthmus. (Hotlanta has an ambiguous Just Friend role with Hercules, always quick with a raised eyebrow when another woman asks after him, yet never intimating anything closer than drinking buddies. Herc’s wild bunch treat her like one of the boys, which she can’t possibly be because she’s got that and that and that. Well, if they’re not going to objectify her, I sure as hades am.)

John Hurt is King Nasticus, who hires Herc’s Mercs to train his army in a montage to defeat a bloodthirsty conqueror called King Reece’s Pieces at Mount Asstickus (hey, and that last name, I didn’t make up!) Hurt is still 157 years old! He was at that age when I was being raised in the cucumber patch, and now I’m in the salad bowl – and he’s still that age!

Peter Mullan is Nasticus’s general, Biggus Dickus; Rebecca Ferguson is Nasticus’s daughter Takeoff Yatoga, and her son sounds like Spencer Treat Clark from GLADIATOR, because the more you sound like Richard Burton, the more Greco-Roman you are. Which is why everyone’s using a fake British accent – including John Hurt, and he’s been British for at least 157 years!

Mount Ass-Stick-Us is actually a grand sequence, where we see Herc’s battle strategies put into action, where we understand how his army can overcome mightier odds and systematically scour the plain of enemy soldier pixels. And where we realize Hotlanta attended the Legolas School of archery because her arrows never run out and she looks too sexy for her testicles.

It is after this battle that Herc faces a moral dilemma. And chooses the way that is right, i.e. the way that will most show off his bulging man-ceps. Proving that goodliness will always win over godliness.

There is satirical comedy, CGI monstrosities, beefcake camaraderie, and HERCULES does admittedly retain small elements of the darkness that Moore intended, but there is too much at stake with the box office to go too bleak, and besides, Dwayne Johnson was already complaining that his Concerned Acting nerve was exhausted. Movie explores Hercules’s grief over his slain family; accused of killing them himself, there is something just beyond his dream vision that tells him otherwise…

We are very obviously treated to Herc’s arc of redemption. He doubts himself, his legend, his strength, his honor, and it all comes to a head when he is chained to two massive things and has to pull them down with his inner belief (but mostly with his outer strength), proclaiming, “I – am – Hercules!” Isn’t this how every Hercules tale ends? You could set your sundial to it.

A movie about an honorable man made by dishonorable swine.
Steve Moore, the creator of the Radical Comics Hercules: The Thracian Wars, died before this production wrapped. The studio stole his work, ruined it, and were fully intending to release it without crediting Moore. Which made Moore happy: “The only thing I am glad of is that apparently they’re not putting my name on it. Because it sounds like it’s going to be idiotic shit.” 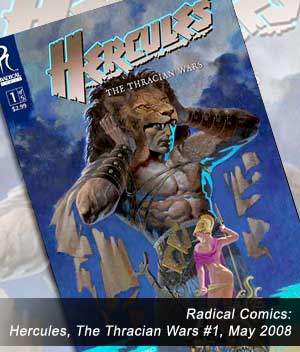 Then the movie’s publicity kicked in, and the pig-hearted swine who call themselves marketers decided to attach the deceased Moore’s name to the movie because of his stellar reputation, and because it made for a good hook that he died before the release, and because he was deceased and couldn’t do anything about it. Can you GET any lower than these mucus-drinking chickenshits?

Alan Moore (WATCHMEN, another legendary comics writer, and no relation) speaks out against the treachery visited upon his namesake here: BleedingCool.com.