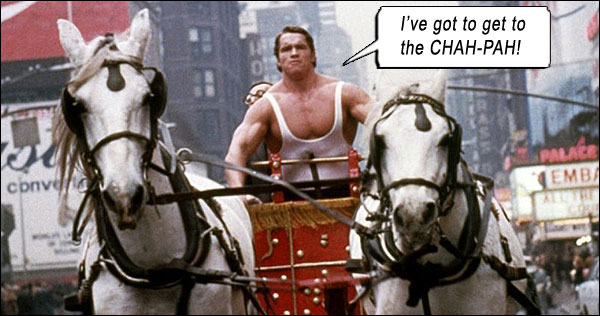 Fish Out Of Austria.

Before the world discovered his Herculean physique in the muscle-doc PUMPING IRON (1977), and long before his breakout role as an “actor” in CONAN THE BARBARIAN (1982), Austrian-born bodybuilder Arnold Schwarzenegger somehow convinced American agents, managers, casting agencies and filmmakers to overlook his utter lack of acting ability and cast him in his very first film role, as the lead in the fish-out-of-water comedy HERCULES IN NEW YORK. (That in itself should tell us what an ambitious, driven young man Schwarzenegger always was, and still is.)

But when your movie’s top billing is the wormy guy from Sinatra’s MAN WITH THE GOLDEN ARM, chinless Arnold Stang, lack of acting ability is the least of your worries.

Stang is Pretzie, a pretzel seller, who befriends Hercules on Earth. Only reason the insufferable, vaudevillian Stang has top billing is because he’s been the longest in the movie biz. He’s no hero, he’s no leading man— hell, he’s barely a man! (Although he was a feline – the voice of TOP CAT in the 1961 cartoon series! Ha! His credibility raised due to playing a grifter alleycat!)

Hercules, bored with his life on Olympus implores his father Zeus (imperious Ernest Graves) to allow him to visit Earth. That’s a big fat no. What reason? Oh, none… Against Zeus’s orders, Hercules leaves anyway and lands in the Big Apple. So begins a mindless tale where Hercules uses every opportunity to point out the absurdity of English phrases, fight people, and take off his shirt.

Hercules’s first act is to tip over a cab that asks him to pay the fare. Message received: Hercules don’t pay cab fare.

His second act is to take off his shirt. 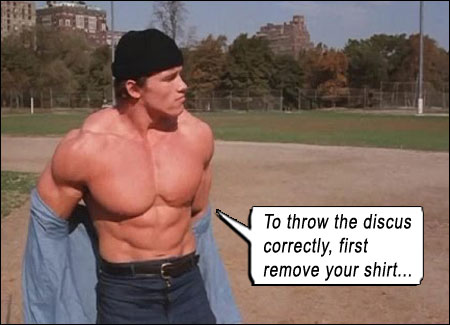 At one point, Hercules shows some college athletes how to throw the discus and javelin. The stupidest reaction is the coach mocking Herc beforehand – a guy who obviously looks like he can throw a building let alone a discus. After he throws the discus a monumental distance, coach then mocks Herc again when he turns to the javelin! This muscled guy is a walking advertisement for athleticism (keep in mind, Schwarzenegger is physically the biggest muscled guy on Earth at this time – it’s a startling, unique visual, a Boris Vallejo painting come to life!) and instead of bonding with him, and learning his training techniques, these athletes poo-poo him – even after he outdoes them! It’s as if the writer thinks this is how to create tension and propel excitement within a scene – must have hero and villain.

Helen (Deborah Loomis, a plain woman bordering on ugly, probably the worst actor of her generation) takes Hercules out on the town, and a guy in a bear suit escapes the zoo. The guy in a bear suit attacks Herc and Helen and—oh, I get it! It’s meant to be a real bear, oh okay. So this, uh, “bear” attacks their horse-drawn carriage and Hercules leaps out to engage, as Helen screams in terror, shouting, “Hercules! Beat him up!” Who in their right mind calls for their boyfriend to ‘beat up’ a bear, instead of calling for help, at the least, running your lazy ass to get a cop?

Helen’s father is a famous That Guy (James Karen) who can actually act.

Hercules becomes a wrestler. The Mob moves in to fix his bouts — well, they’re not the real Mob, just some vaguely Italian-looking guys who think they’re acting how Italian Mob guys act, led by Merwyn Goldsmith, who is probably still eating out on his glory days of being in a film with Arnold Schwarzenegger.

The pointless plot finds its feet when Zeus tasks the goddess Nemesis (Tiana Elg, who looks like someone’s aunty) to bring Herc back to Olympus. No reason is ever given as to why Zeus is so infuriated at Herc exploring Earth – he is simply Old Man Shouting At Cloud – and no reason is given as to why it is so imperative Herc return to Olympus.

Zeus’s current wife, Juno (Tanny McDonald), wants to punish Hercules (again, Just Because) and secretly gives Nemesis a powder to drop into Herc’s drink, that will rob him of his strength. Soon Herc is in a weightlifting competition with Monstro the Magnificent (real life Mr. World, Tony Carroll) and loses on the 1000-pound clean-and-jerk. Don’t look for any moral, though. Herc loses his godly might, but he’s still got enough muscle mass to be an actual strong human, so – No Lesson Learned.

The pivotal climax in any Hercules film – pulling down two mighty pillars – is arrived at in a warehouse stacked with cardboard tubs: Herc has lost his super strength, yet he chases down the Mob car, riding a horse-drawn chariot through New York streets (accompanied by annoying balalaika music, as with all the action sequences), in an iconic image that just screams Gay Pride Parade. After the convoluted non-plot of effeminate boytoy Mercury beseeching Herc to return to Olympus, after Pluto does the same thing, darkening every electric light in the city through magic who cares fuck you, after Mercury sends Atlas and Samson to fight the Mob (in what can only be described as girl-punching), after Nemesis narcs out Juno for making Herc weak, Zeus just grants Herc his strength back – magic who cares fuck you. And the mighty Hercules pulls down two towers of cardboard tubs that topple on his Mob malefactors! Cardboard tubs! Ferocious! They look like pillars if you really squint.

Suddenly, the coda. No reaction to the fact Herc has his strength back; no resolution with the Mob; no tying up loose ends with the potential girlfriend; just teleport back to Olympus, leaving Wormy Guy lonely and pathetic and dreaming of all that unabashed shirt removal.

STINGER: after Hercules describes his New York adventure, Zeus takes a flying leap down to Earth with a big smile on his face… Does he have his eye on that sensual Wormy Guy?… 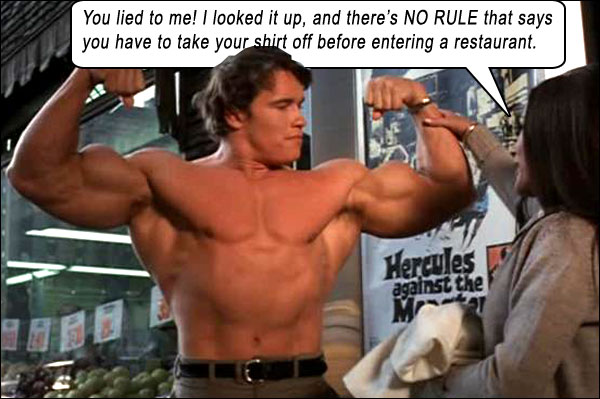 Steve Reeves and the peplum bodybuilders of yesteryear (Sergio Ciani aka Alan Steel, Gordon Scott, Reg Park, et al) were fading from the scene by 1970, and it was inevitable a new strongman would rise in their place. Already a 5-time Mr. Universe (and soon to start his run – from 1970 – as 7-time Mr. Olympia), there was no better visual representation of the Son of Zeus than Schwarzenegger in his prime!

Credited as “Arnold Strong Mr. Universe” (because the marketers of the day believed “Schwarzenegger” was not a name American audiences could digest), Schwarzenegger’s performance is mind-numbingly atrocious. The only factor going for him was his stellar physique. And, like a bad tennis player, Schwarzenegger pulls every actor around him down to his level of suck. The theatrical release of this movie dubs his voice with an American actor, but for the sake of high art, I implore you, DO find the version with Arnold’s voice intact… uh, I mean for the sake of high comedy…

The last written feature by 61-year-old Aubrey Wisberg (who was probably battling for relevance in a world gone supersonic since her birth in 1909), and the first directorial feature by Arthur Seidelman (who just loves his point-of-view shots), we can imagine why HERCULES IN NEW YORK lacks any cohesion, as a young boy tries to nail down the vision of an old woman.

No wonder there was so much hot shirtless action.