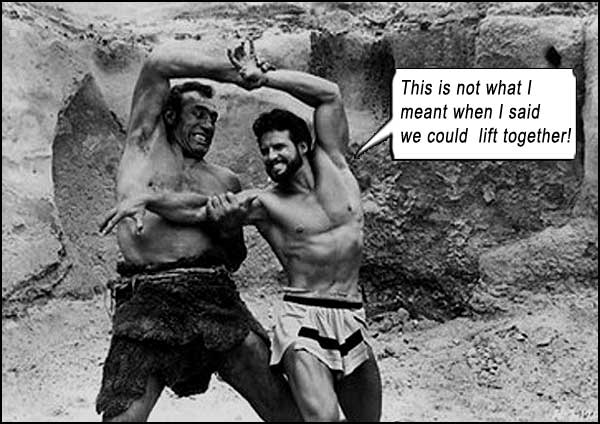 Steve Reeves walks around looking gorgeous, and a Hercules movie is going on ‘round here somewhere.

Like Clint Eastwood as Dirty Harry, Hugh Jackman as Wolverine, or Bruce Willis as John McClane, Steve Reeves as Hercules inhabits his role so perfectly that his magnetic presence alone is enough to see HERCULES UNCHAINED to its conclusion, whether we pay attention to it or not.

And we’re not sure writer-director Pietro Francisci really paid attention to a plot that could have happened whether Hercules was in it or not. Inserting himself into a political struggle between two royal brothers, Hercules agrees to mediate, but on his journey from one brother to the other, he is waylaid by drinking The Waters Of Forgetfulness, and spends a whole chunk of movie making sweet love to a manically insecure queen, while the brothers go on feuding without him.

The brothers are Oedipus (flamboyant Cesare Fantoni, who looks like Tony Curtis in SOME LIKE IT HOT – when Curtis was in drag), and Polinices (grave Mimmo Palmara, who just played alongside Reeves as Iphitus in HERCULES).

This Italian production (with English dubbing) opens directly after its predecessor HERCULES (also written-directed by Francisci), when Herc and his love Iole are leaving Ithaca for adventures in sequels, accompanied by young Ulysses (Gabriele Antonini). Ulysses’ dad, King Laertes, gifts Iole a lute, which she plays on the wagon Dean Martin-style, meaning, as soon as she starts strumming all of its strings ignorantly, an orchestra chimes in and she just has to sing and look hot and forget about playing. 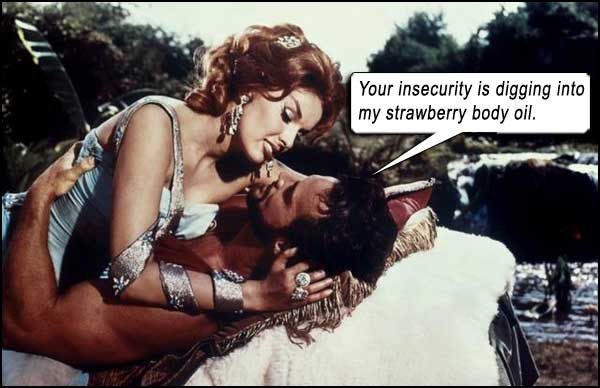 The travelers meet the giant Antaeus on the road, who challenges Hercules. Now in some English dub versions, weedy Ulysses shouts to Hercules that “it’s Antaeus, who becomes stronger when he touches the Earth,” which is why Herc must lift Antaeus above the ground to beat him (although Antaeus can take a punch from Herc and still laugh like Anthony Quinn! That’s pretty righteous!). In some versions, this dialogue is omitted completely, so… just a fight then. Thus, approach any English dub with the caveat that we’re getting spaghetti without the meatballs.

As with HERCULES – when our heroes were waylaid by wet Amazonian women – HERCULES UNCHAINED almost stagnates when Hercules and Ulysses are the guests of oversexed Queen Omphale (Sylvia Lopez, who would tragically die at 26 after this production). One might think, “Mmm – sex!” but we’re not getting any real sex scenes, just kissing, grape-feeding, vagina-high skirts and oiled pecs. And when Herc escapes with his Theban rescuers, Omphale kills herself, so… that’s that then. As we look at our watches, calculating how much of our life was wasted irredeemably, movie washes its hands of the episode and moves on.

For the sake of having Hercules earn his paycheck as a strongman, a scene out of nowhere has Herc battle three tigers in an arena. In those days, lions, tigers, bulls, etc. that attacked our hero were considered “bad guys” just through association with the villain, but by the time we view these movies in our modern era, we only feel pity for the wild animals in captivity and servitude of the villain. Thus, in the MST3K edit, the hosts summarily “boo” Hercules every time he strangles one of those tigers.

Movie derails completely in its climactic scenes, firstly, because Hercules doesn’t pull down any pillars with his lats, but more egregiously from a screenplay point of view, the final rockstar swordfight doesn’t even involve Hercules against any particular villain! – It’s between the two brothers who were feuding who had nothing to do with Herc’s adventures! Bottle-red Polinices against Tony Curtis as Josephine in a battle to the peripheral plot point. 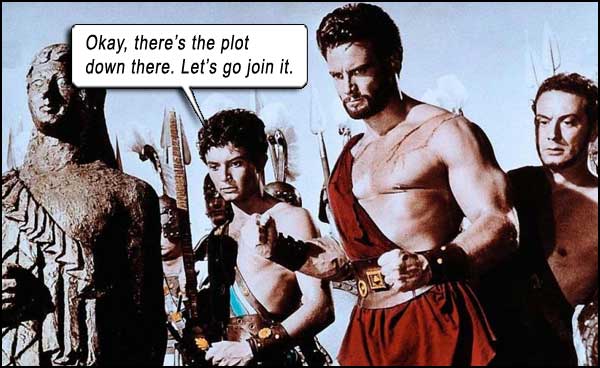 Then it’s Herc in a chariot leading his… Spartans? Ithacans? Thebans? into battle against Spartans? Ithacans? Thebans? Whatever the case, some centurion whose name escapes me and the history books is holding Iole hostage, and it takes a whole lotta sword and sandals to retrieve her in a big battle, that leads to the non-chemistry final kiss atop a hilltop that looks suspiciously like a studio set.

That’s what happens when you squish so many tales together, as Francisci borrows from Sophocles’ Oedipus At Colonus and Aeschylus’ Seven Against Thebes, sprinkles in some loony Queen and adds Tony Curtis in a dress. Add that perfect final ingredient: Steve Reeves as Hercules!

And no one’s complaining…