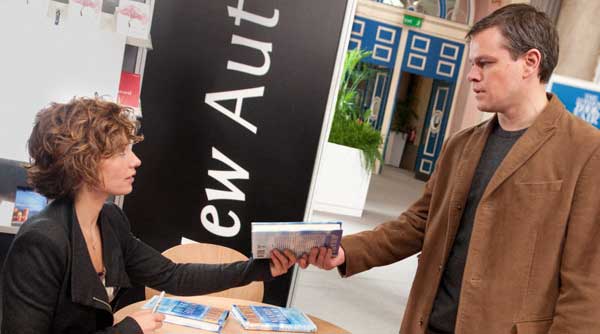 Their eyes met across a crowded afterlife…

Ghost stories for the sensible.

HEREAFTER, produced and directed by Clint Eastwood, is a pondering of What’s Next from three very different human perspectives.

Clint Eastwood is at that age when we would all be inclined to ponder the possibility of a Hereafter, a Life after Death (by definition, an impossibility, but for many otherwise clear-thinking humans, this paradox makes all the sense in the world). Thankfully, Clint brings his thoughtful, storytelling mind to bear on this paradox (written by Peter Morgan) and crafts yet another of his magnificent movie monuments. When this moviemaking Prometheus eventually meets his Hereafter, there will be a tectonic shift in the world of movies, if not the world at large.

French Marie (Cecile De France) “dies” in a flash-tsunami and is revived, thence troubled by visions of some other dimension; a young British boy (Frankie McLaren) dies in an accident and helps his twin (George McLaren) from beyond; an authentic American psychic, George Lonegan (Matt Damon) whose brother (Jay Mohr) is trying to capitalize on his powers, tamps down his extra-sensory gifts, finding them a curse to leading a normal life and finding a normal love.

At first blush, HEREAFTER seems too eccentric a topic for a grounded filmmaker like Eastwood to tackle. Again, he surprises us, never delving so far into magic and supernatural that he loses everyone but the culties. At its heart, HEREAFTER is about ‘searching for answers.’ Ironically, it’s about lost souls. There’s even a little romance thrown in for girlies who wandered in by accident to see The Sexiest Man Alive mumble introspectively.

The movie reads so well because the moviemakers do not advocate any stance on whether ‘afterlife’ is real, connected to any deity, or the wild imaginings of desperate humanity; they do not offer answers either via rational experiment or irrational religion. The three characters are simply trying to live their lives, which have taken melancholy turns. Which fits the superstitious profile: most people would like to believe in a hereAFTER because they’re dissatisfied with the hereNOW.

Marie, once a rising, incitant newscaster, throws it all away to travel the world researching a book on her post-death experience; the little boy, who is taken from his alcoholic mother, cannot find peace with his foster parents, stealing money to travel the country and visit psychics whom he hopes can contact his dead twin; and George Lonegan takes a cooking course (with head chef Bobby Baccala!), meeting delectable Bryce Dallas Howard, and tries to make a delicious connection with her. Just as they partner up for a cooking contest, she is scared off by the discovery of his “powers.”

Dallas disappearing (and leaving Damon in the lurch without a cooking partner!) makes us realize that HEREAFTER is also about the eternal quest to ‘make connections’; connection with the other side, connection with other mortals who believe in the other side; connection between two people just trying to live life on this side. And then – another kind of connection, as the three separate stories spanning three countries (France, America and England) artfully weave into each other in London.

When Marie and George Lonegan meet, it is beautifully underplayed; it’s how people meet in real life (with another touching, recognizably Eastwood theme on the soundtrack!), and though they simply sit down to coffee in a streetside cafe, their “connection” is as electric as the climax to any action movie. What a majestic filmmaker!

What I want to know is: Did George ever win that cooking contest?